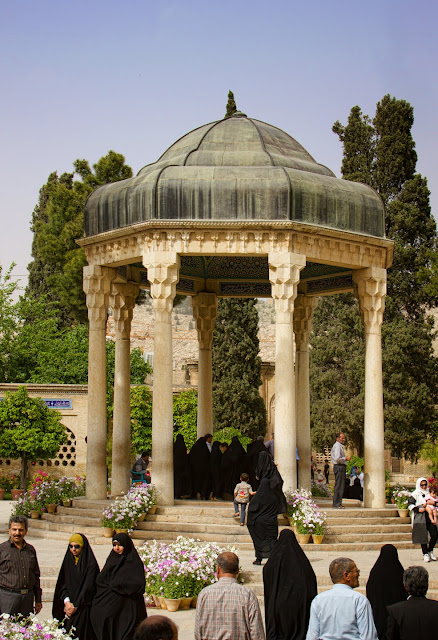 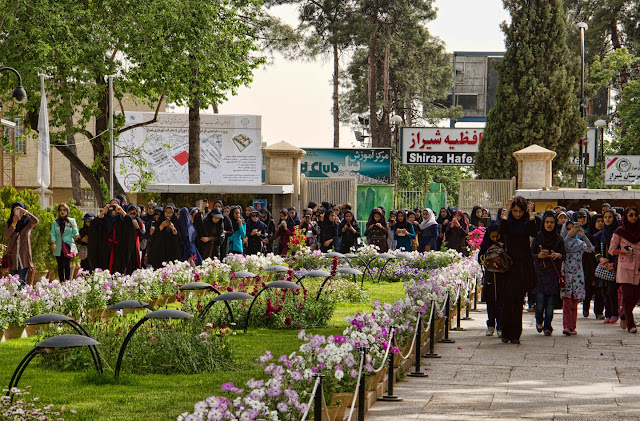 That Iranians have a great deal of national pride -- they have been a country for 2500 years, after all -- is not news to any of us on the tour at this point. And yet, I was still surprised by the crowds at Hafez's tomb.

Hundreds of people, busloads and busloads of them, coming to pay their respects to -- a poet? Who lived in the 14th century? It's impossible to imagine Americans, or the residents of any Western nation, for that matter, having this kind of devotion to poetry. There aren't any shrines for Walt Whitman or Emily Dickinson, and poetry is sadly something that only a very small minority takes any interest in.

Goli has recited poems for us on several occasions; she says everyone knows them by heart. I can't pick out more than the occasional word, but I love the way the sounds entwine and repeat, like the mosaics on mosques or the brickwork in old walls.

For a minute, it makes me feel that I understand something of what it is to be Persian, to make lush gardens in a harsh desert country, to build your houses around secret courtyards but invite strangers to stay, to decorate mosques with a few simple patterns repeated and embellished into astonishing complexity, and create mosaics for palaces with pieces of broken mirrors.