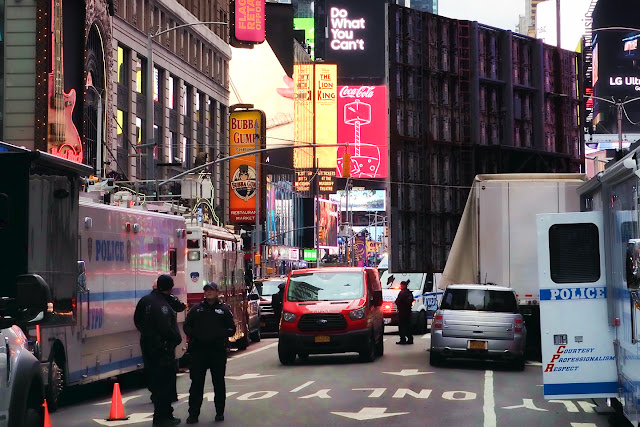 By every standard -- personal, professional, political -- this has been one long freaking year. It's hard to find anything good to say about being as unwell as I was for so much of it, but the fact that I spent months unable to follow current events with my usual passion was definitely a blessing.

Of course I couldn't muster much passion for anything beyond my bed for most of that time either. Being sick was a huge, tedious black hole in the history of this year, but I am bloody grateful for every second all the same. I still managed to see penguins and icebergs, medieval masterpieces, and mountain gorillas, even while spending far more time learning about all the varieties of cardiac dysfunction than I'd ever dreamed possible.

Here are the preparations in progress in Times Square earlier today. I might wish that 2019 will be a little less dramatic than its predecessor, but at least I feel ready to take it on, whatever adventures it brings.
Posted by Kathleen at 4:44 PM No comments: 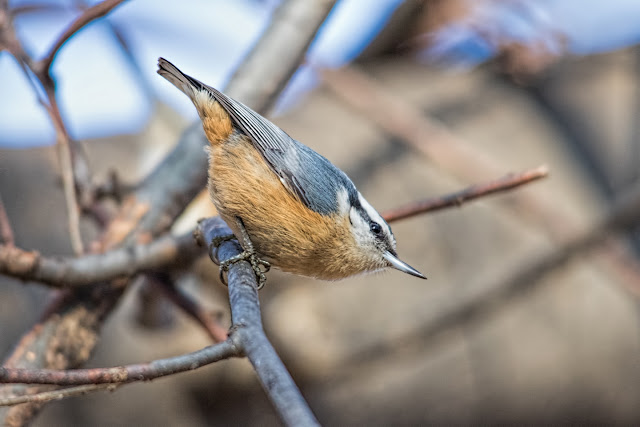 Here's a red-breasted nuthatch, a nice change from the more common white-breasted variety I usually see. I also like the black bandit mask across the eyes.
Posted by Kathleen at 6:00 AM No comments: 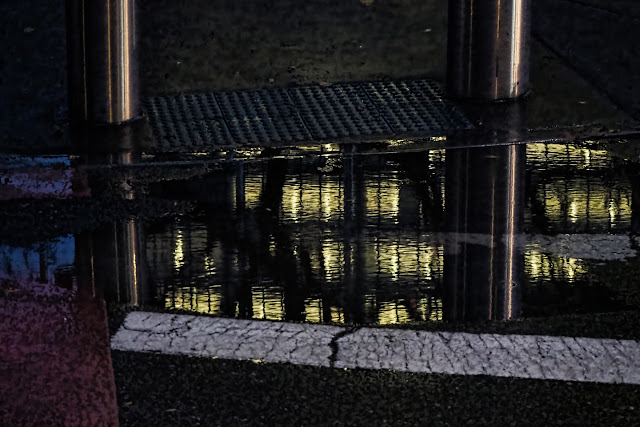 The lights of the Secretariat Building at the UN, reflected in a puddle on a wet night. 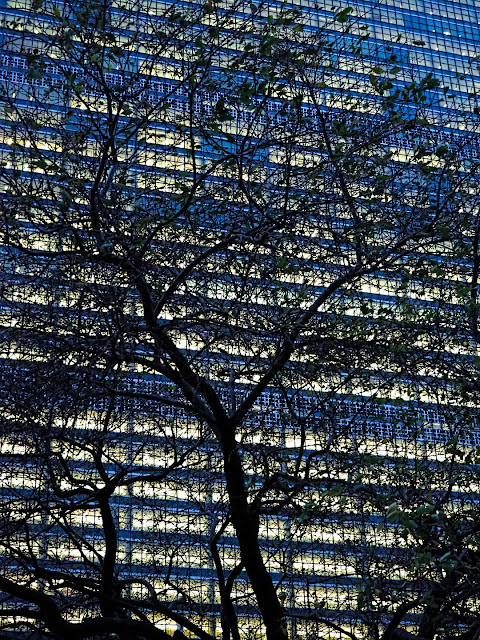 The UN at night, seen from First Avenue.

This is the Oscar Niemeyer-designed Secretariat Building, the iconic tower on the East River which is what everyone thinks of when you refer to the United Nations Building. Although the General Assembly, designed by Le Corbusier, is interesting seen from the street, it doesn't catch the eye like its tall neighbor.

I've just signed up to take the tour next week -- one of the many things I've always meant to do in New York but somehow never got around to.
Posted by Kathleen at 10:20 AM No comments: 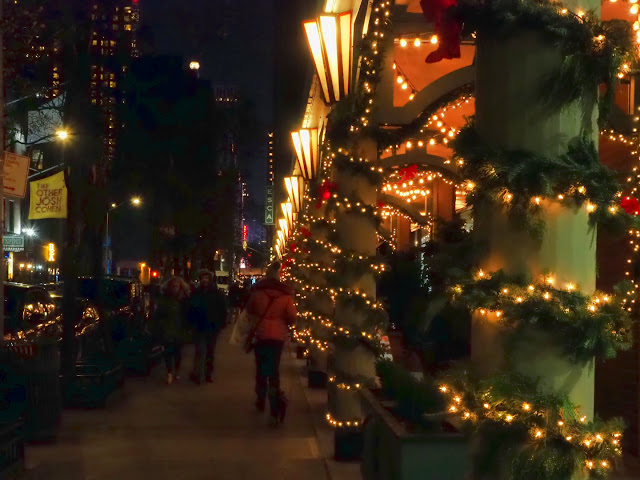 A different kind of twinkle for this Tuesday's posting: Christmastime in the city.

Hoping that however you're spending the day, wherever you are, your travels may be happy ones.
Posted by Kathleen at 6:00 AM No comments: 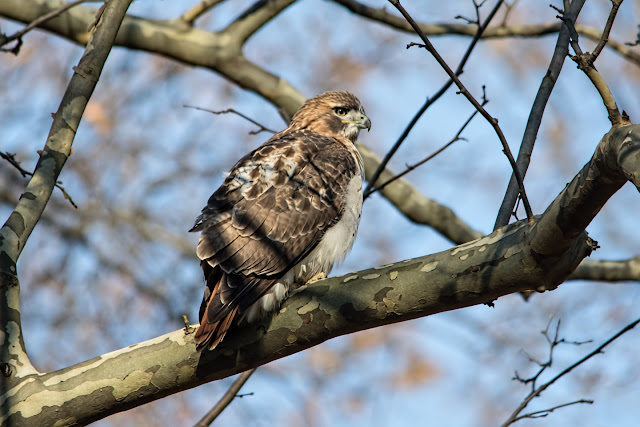 One of the famous red-tailed hawks of Central Park. (Not as famous as Mandy the Duck maybe, but much loved by New Yorkers, except when they decide to build their nests on snooty Fifth Avenue apartment buildings.) 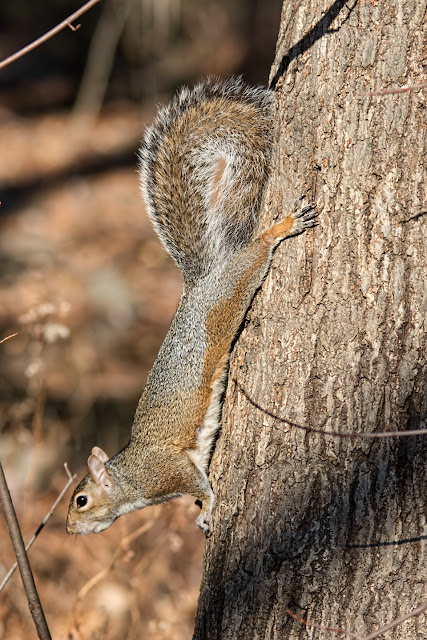 While I was admiring and photographing the beautiful hawk, this poor squirrel -- who'd also clearly noticed the hawk -- was literally frozen on this tree next to me.

It didn't move so much as a whisker, but kept making the most heart-rending squeaking noises. After a few minutes the hawk flew away, and once it was safely out of sight, the squirrel scampered safely away.
Posted by Kathleen at 6:00 AM No comments: 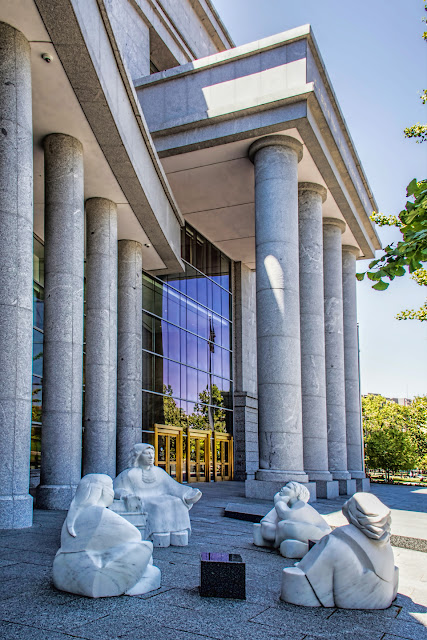 Since I'm cleaning house, here's a picture I never posted from Denver last summer: reflections in the glass windows of the Carr Courthouse, surrounded by appropriately judicial columns and some modern statuary.
Posted by Kathleen at 5:30 AM No comments: 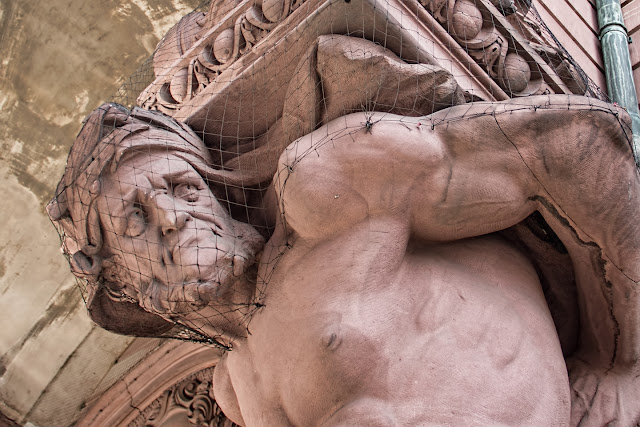 Posting late this week -- I'm taking advantage of feeling better, and trying to sort through the mountains of stuff in my apartment so I can buy new bookshelves and storage units and have some hope of being able to organize my stuff without having all my closets crammed to overflowing with junk I can't fit anywhere else.

This is an older picture, from Frankfurt in August. Bad as I have often felt during the past several months, I fortunately never had to resort to using steel mesh to keep my face from falling off.
Posted by Kathleen at 6:20 PM No comments: 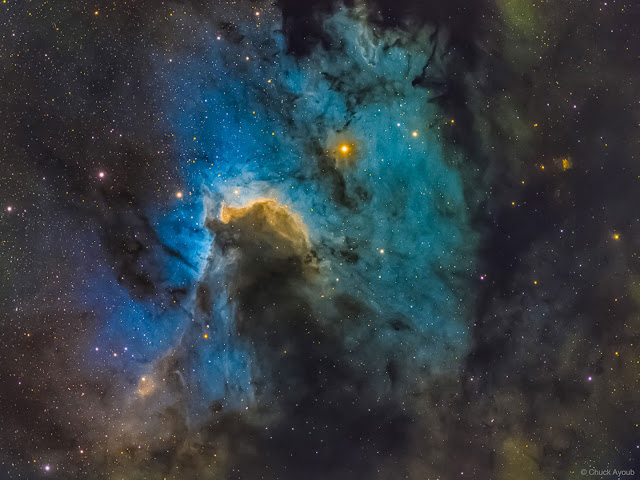 Those blues looks alluringly tropical on an (almost) winter morning, even though I know it's much colder there than it is here. There were some deceptively tropical blues in Antarctica as well.

This is the Cave Nebula, which lies about 2400 light years away, but I will now always think of it as the Iceberg Nebula.

Image Credit and Copyright: Chuck Ayoub
Posted by Kathleen at 6:35 AM No comments: 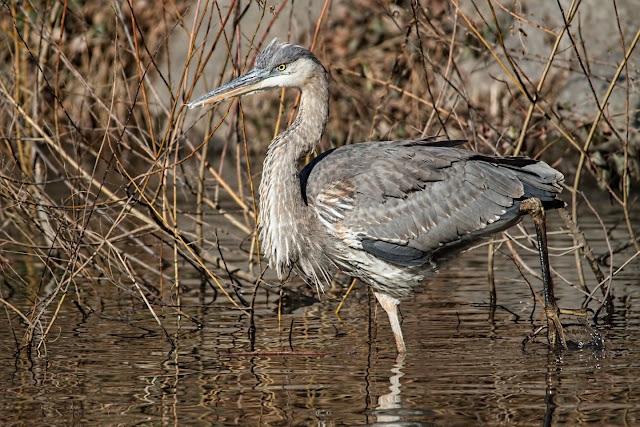 There were several great blue herons sharing the Pond in Central Park with Mandy the Duck and his friends, giving the frostbitten photographers something to focus on while we waited for the damn duck. (I kid, of course. I love that duck.)

Speaking of Mandy, he made The New Yorker this week, showing up in the daily cartoon as the front-runner for a White House job. “He's an unorthodox choice for chief of staff, but his approval ratings are through the roof.”
Posted by Kathleen at 7:04 AM No comments: 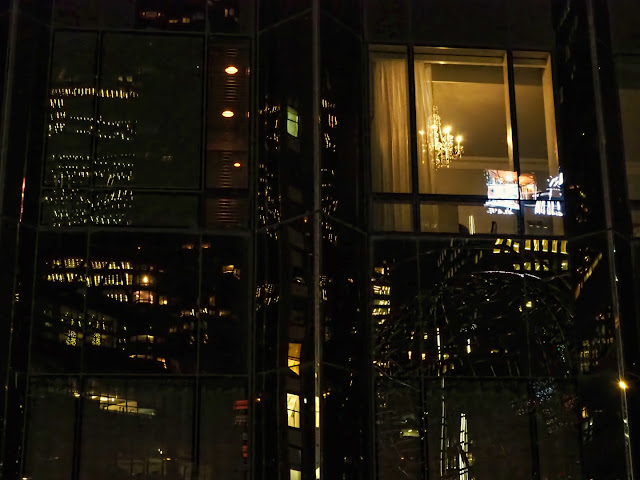 The city at night, reflected in the glass wall of a hotel (plus a peek inside one of the windows.) 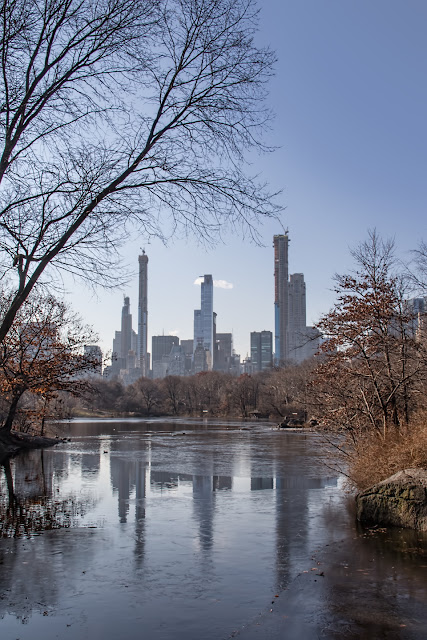 A thin film of ice on the lake in Central Park. It's been so consistently cold that I'm surprised the lake isn't frozen solid by now
Posted by Kathleen at 1:41 PM No comments: 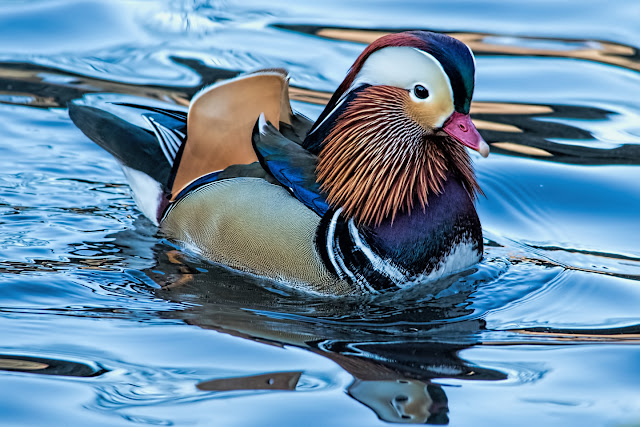 This is Mandarin Patinkin, Mandy for short, a Mandarin duck who has taken up residence in Central Park. Mandarins are native to East Asia, and though they are occasionally seen in North America, those birds are always escapees from zoos or private aviaries. (Mandy has bands on his legs, so he's been in human captivity at some point.)

He first showed up in October, and has been mostly living in the pond across from the Plaza Hotel. He's been quite the media sensation, with crowds turning up every day and New York Magazine naming him New York's Most Eligible Bachelor. I missed all the news stories -- not surprising since I was not taking much notice of the outside world during October -- until this past weekend when I saw a clip on CNN, featuring a reporter attempting to lure him closer with a recording of Barry Manilow singing Mandy. (Mandy the duck quite sensibly swam away as fast as his little feet could paddle him.)

On Monday, I finally went to pay my respects and found that he was not in the mood for photo opportunities and was hiding in the rocks. Or so the half dozen photographers and various interested passersby waiting eagerly by the water told me. I waited for 15 minutes or so, then went to have lunch and thaw out in the food court at the Plaza.

I had better luck after lunch; someone was feeding the mallards and Mandy came out to see what was going on and get his fair share of the goodies. He was even more handsome in person, unlike many celebrities, and posed agreeably for his many fans. So now I can cross Go See Famous Duck off my life list and go back to sorting through my books. 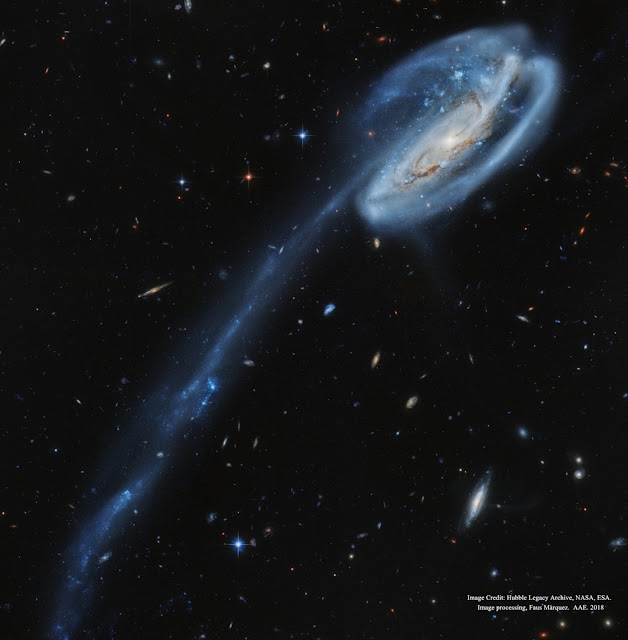 When this beautiful Hubble image turned up as today's choice on NASA's Astronomy Picture of the Day site, I was very glad I hadn't already picked one to run this week. I am always fascinated by the deep space images with their galaxies stretching back into infinity, and this is an especially good one.

The subject galaxy, Arp 188, the Tadpole Galaxy, is spectacular as well. That long tail is probably the result of a long-ago quarrel with another galaxy. 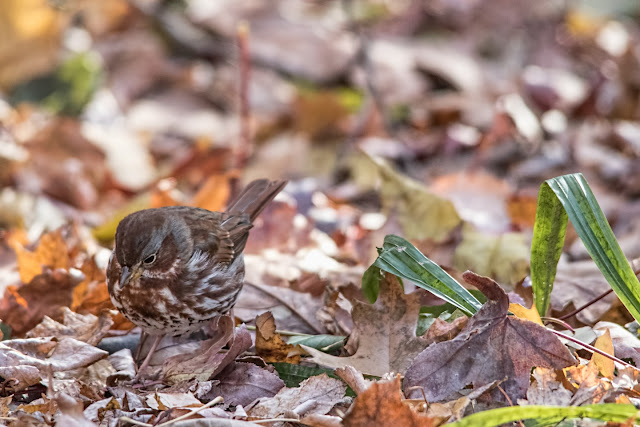 A song fox sparrow rooting through the leaves looking for a treat.

They're allegedly quite a common bird, but I seldom see them -- this guy was surrounded by house sparrows and white-throated sparrows so maybe I just don't always notice them. 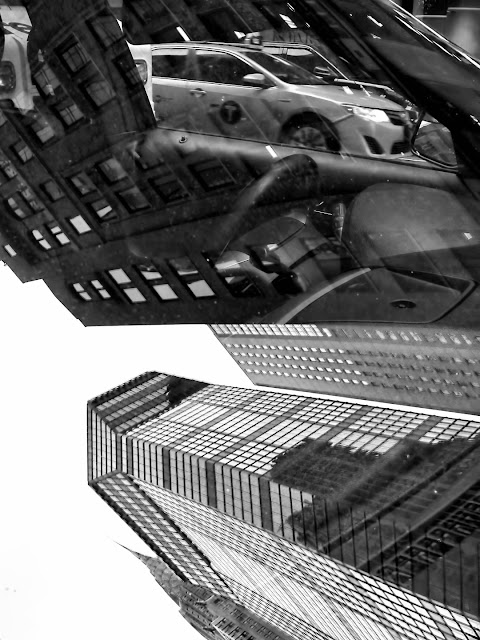 I wasn't sure if I liked this one better in color or black and white, but I've decided to go with black and white because the yellow of that taxi is too much of a distraction otherwise.

Those buildings are reflected in the windshield and hood of a car parked on Lexington Avenue (you can see the top of the Chrysler Building peeking out at the bottom.) The cab is nicely framed in the driver's side window.

Winter seems to have settled in early this year, but as long as it isn't too windy I don't mind temperatures in the 30's. I've been putting my Antarctica gear to good use, although sleeping in my wool long johns generates so much static electricity that I can see bright blue sparks when I turn over in bed at night. So they provide entertainment as well as warmth!
Posted by Kathleen at 7:21 AM No comments: 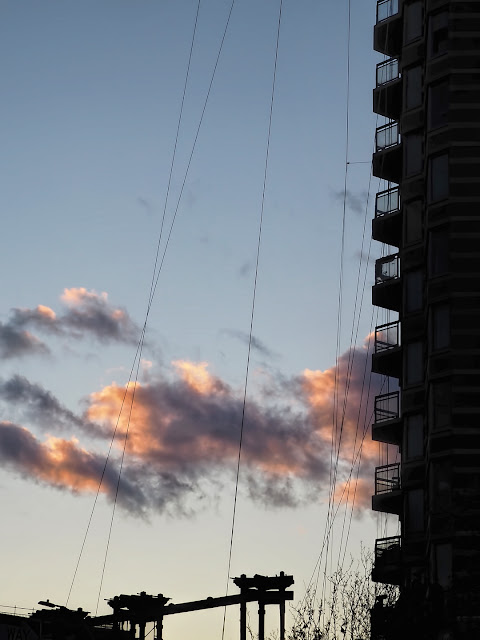 I have no idea what the cables dangling from this apartment building are for, but they add some interesting detail to this wintry twilight.
Posted by Kathleen at 6:45 AM No comments: 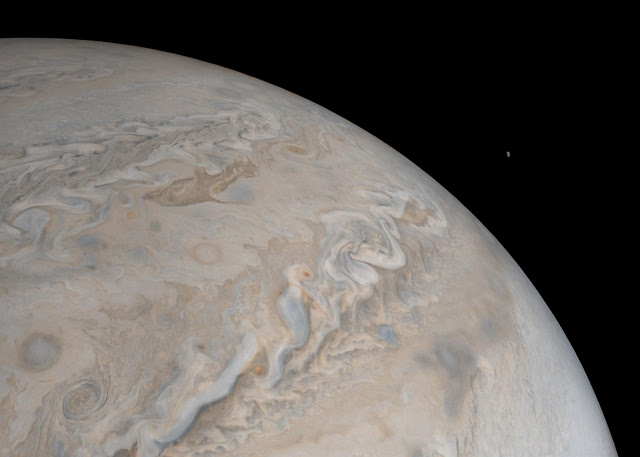 That little speck in the upper right is Jupiter's moon Io rising above the vast horizon of its parent planet. The Juno probe took this picture in October.

Image credit: NASA/JPL-Caltech/SwRI/MSSS/Gerald Eichstad/Justin Cowart
Posted by Kathleen at 6:00 AM No comments: 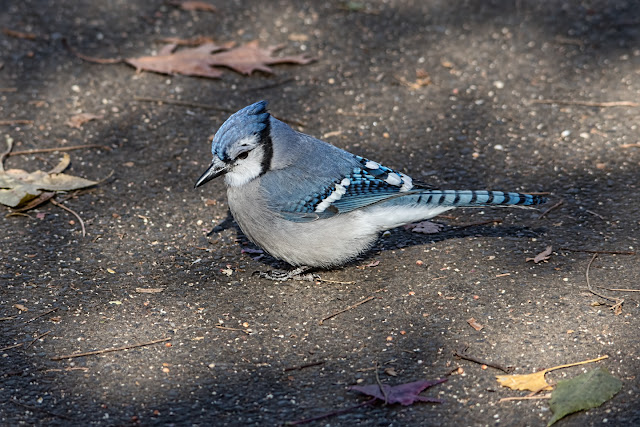 I love the patterns of shadow and light on the path, and the fat bluejay in the middle of them. 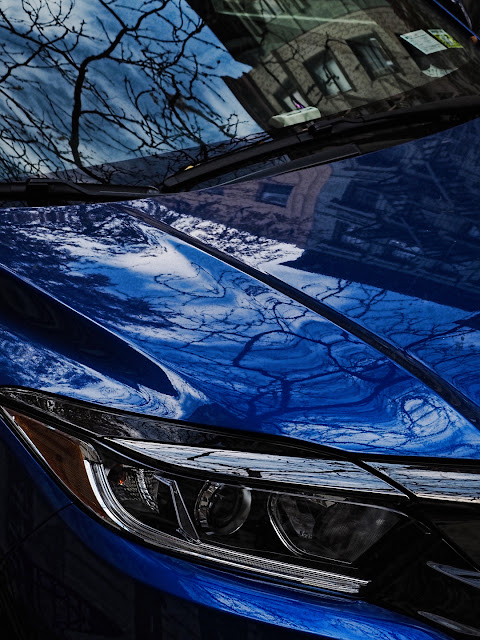 Another in the car series, a headlight plus some lovely reflections around the corner on West 44th Street.

I've been dealing with the early winter weather by crawling into bed early every night with a book and a cup of hot chocolate. Until I am up to traveling the world again, there are far worse ways to spend my time.
Posted by Kathleen at 6:00 AM No comments: