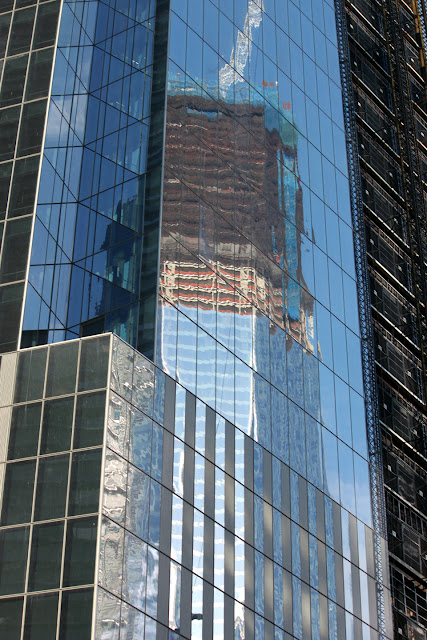 More pictures from the 9/11 Memorial. The new World Trade Center buildings are being built around the original site, so here's a picture of one tower under construction reflecting another one. 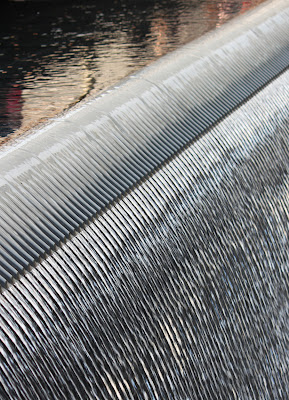 Right, a closeup of one of the memorial pools.
Posted by Kathleen at 8:47 PM No comments: Links to this post 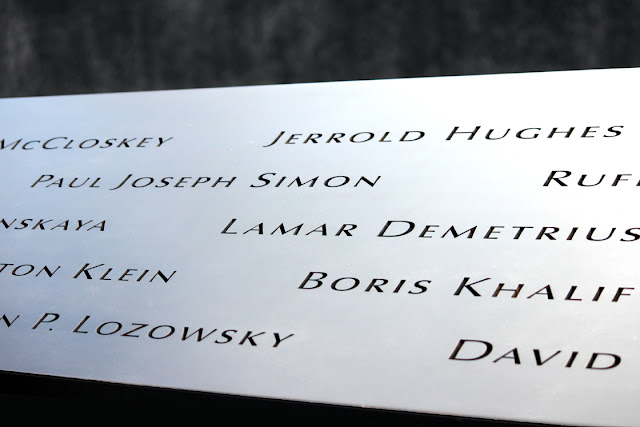 Names at the 9/11 Memorial this morning.

My visit had nothing to do with the New Year; I made a reservation as soon as they started accepting them, and this was the first available slot during daylight hours. The wintry day, the brown trees, the intermittent sun were appropriate to the mood, but because the new World Trade Center buildings are rising up all around, the memorial is in the middle of a construction site and so still feels raw and unfinished. 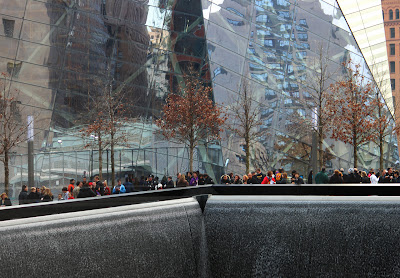 There are two pools, in the footprints of the towers, and it was odd how small they seemed. Those towers were so huge! They loomed over everything in lower Manhattan, and maybe that distorted my sense of scale, but I used to take a shortcut through the lobby of the North Tower when I worked downtown and that lobby felt a mile wide when I was running late.

Now they're gone, reduced to perimeters engraved with the names of the dead, and the only enormity is their absence. All the absences, everything and everyone that was, and then suddenly, wasn't.

Posted by Kathleen at 8:35 PM No comments: Links to this post 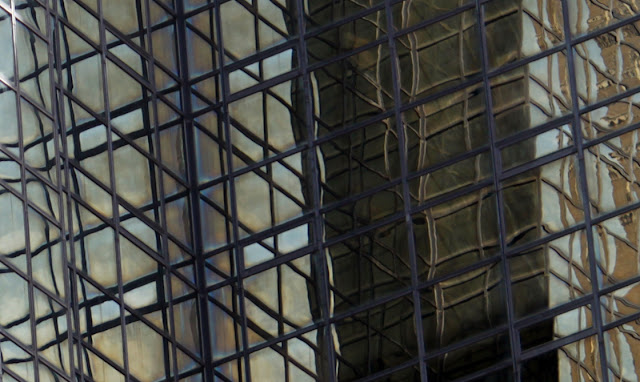 Happy New Year's Eve Eve, an appropriate day for looking back, so here's a photo I never posted of the always highly geometrical Grand Hyatt in all its lovely moodiness.

Even stoplights blink a bright red and green 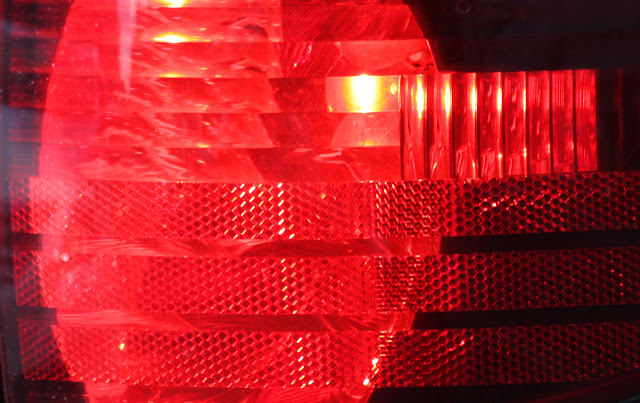 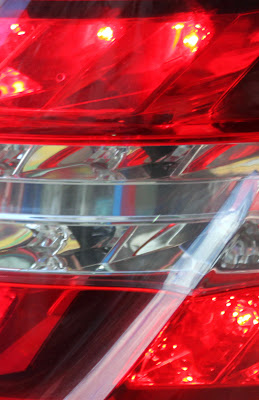 In further honor of the holiday, here are some more sparkly red and gold objects: two taillights from my recent batch of downtown photographs.
Posted by Kathleen at 4:38 PM No comments: Links to this post 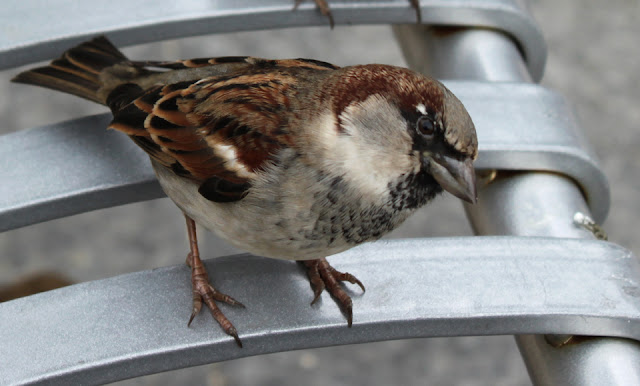 And Merry Christmas from a lowly house sparrow, a male to partner the Reno female from a few weeks ago.

I got soup to go and ate in the park one day last week, mostly because there will be so few days in the next couple of months where that's even a possibility.  The accompanying roll was dry and crumbly and when I brushed the scraps from my lap I was suddenly mobbed by thirty or forty house sparrows (a gull and a starling showed up as well but they never had a chance.) 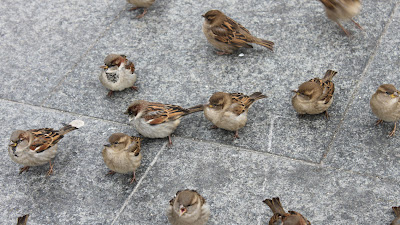 I got the field guides for my April trip to Africa this week, and I've been learning the birds of southern Africa, exotic new classes like sugarbirds and mousebirds and sunbirds.

Some of the names appear to reflect a real lack of commitment on the part of European settlers determined to make the birds in their new home fit into the established taxonomy: Sparrowlark! Cuckooshrike! (See American Robin.) Or else they were named by committee.

But many of them sound like made-up names from a Monty Python skit about bird-watchers. Sociable Weaver! Rattling Cisticola! Shaft-tailed Whydah! Spotted Thick-Knee! And my personal favorite, the Chestnut-Vented Tit-Babbler!

I must give a mention to the poor Lark-Like Bunting, which is apparently the house sparrow of South Africa. Not only did it get a name that points out what it isn't instead of what it is, the guidebook describes it as "a drab-looking bird that is difficult to identify." I will definitely be on the lookout for it.

The return of daylight 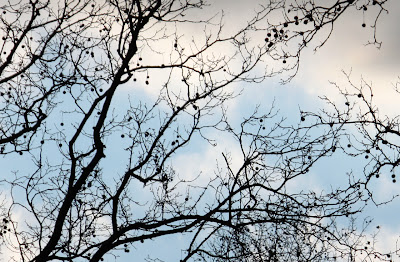 The solstice past, daylight starts returning to us, day by day, a few minutes at a time. I reach for it without thinking, turning my face to the light like a sunflower.

With the leaves gone, the skeletons of winter trees (here in Battery Park) make it clear how their entire existence is that same reaching for the light.

Another building that did not object to being photographed 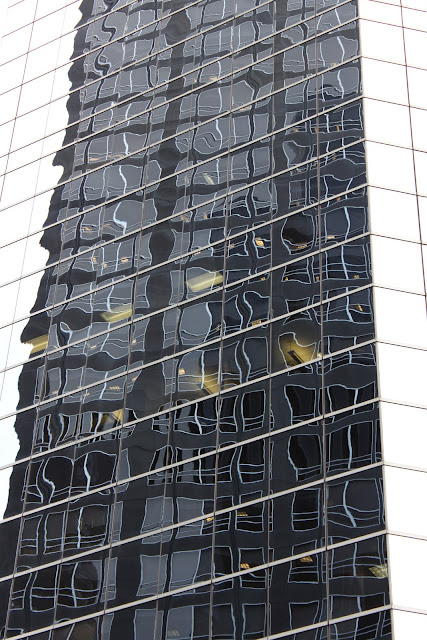 Another downtown building, this one on Whitehall Street.

I love the way the reflection of the building opposite is perfectly framed by the white grid that seems to vanish into the air.
Posted by Kathleen at 6:44 PM No comments: Links to this post 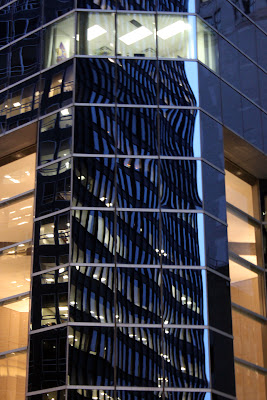 I'm taking a class downtown this week, so have new things to see but very little daylight to see them by, this darkest week of the year.

This is a little blurry, but for a picture taken on the run without the assistance of a tripod, not too bad.
Posted by Kathleen at 9:09 PM No comments: Links to this post 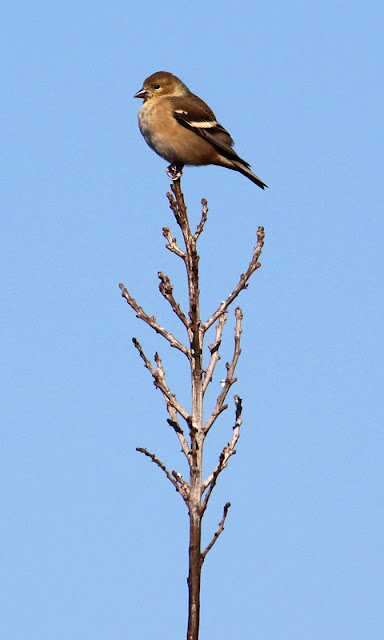 After yesterday's drama, here's a nice, safe finch, perched most alarmingly at the very tiptop of a tree.

I do love the way they do that.
Posted by Kathleen at 6:04 AM 2 comments: Links to this post

No automobiles were harmed in the making of this picture 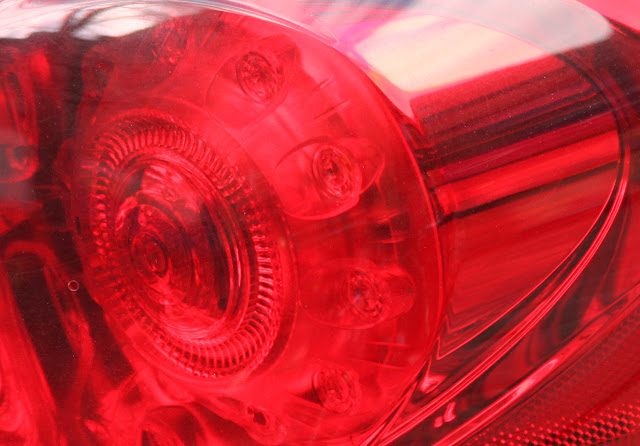 I wish I could say the same for the photographer -- one of the taillight pictures that got me attacked earlier today. And I came home to find that my Gmail account had been phished, and everyone in my address book offered the opportunity to buy what I'm sure are very reputable nutritional supplements.

On the whole I've had better days.

Posted by Kathleen at 3:56 PM No comments: Links to this post 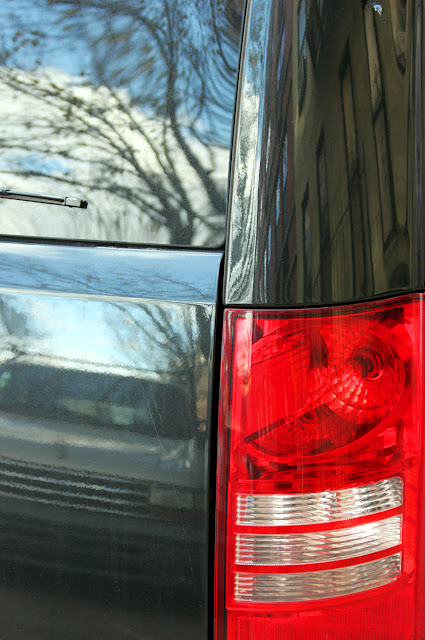 The back of a parked car on West 48th Street.

I noticed some interesting windows on 48th Street on my way to work this past week, and went back this morning with my camera. Lately I'm fascinated by the headlights and taillights on cars -- geometries and reflections in one small package! -- and I stopped several times to look at some that caught my eye and to take this picture.

A man started screaming, and after a minute I realized he was screaming at me. I couldn't understand what he was saying and he was obviously more than a little crazy so I backed up, and tried to move around him. He punched me in the chest.

"I don't know what you're saying. I'm just going to leave now," I said, as calmly as I could, trying to back away. He followed me, still screaming, hitting me on the chest and shoulders. A man walking by got in between us and told the man to leave me alone or he'd call the police.

"If I call the police you'll be arrested for assaulting this nice lady."

The crazy man pointed to my camera, and screamed some more, and tried to hit me -- my good samaritan kept his blows from landing -- and I finally understood that he thought I had taken his picture. I denied it, but every time I tried to leave he lunged at me again.

I showed the pictures to my rescuer (and how embarrassing was that -- a dozen pictures of taillights) and he told the crazy man that there were no pictures of him in the camera. A few other people had stopped, and finally I was able to get away, the man still screaming at me as I half ran up the street.

The irony is that I'm probably one of the photographers least likely to have taken his picture. My friends even tease me about the lack of people in my pictures, and though I've tried to take more photos of faces I find interesting, it's usually at the safe distance of a telephoto lens, and I seldom get caught.

But after today, I think I'll stick to inanimate objects and wildlife.

Posted by Kathleen at 3:41 PM No comments: Links to this post 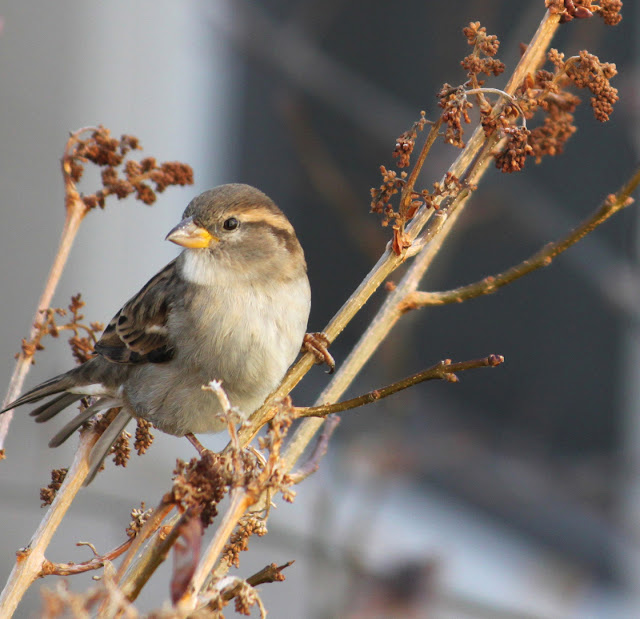 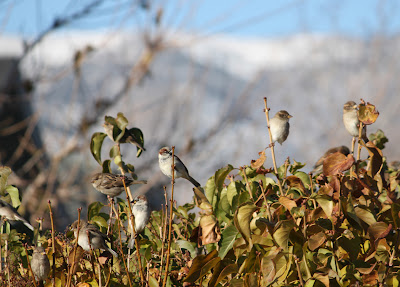 The shrubbery on my friends' front lawn was mobbed with house sparrows. They tend to travel in flocks but this was more like a convention.
Posted by Kathleen at 6:39 AM No comments: Links to this post 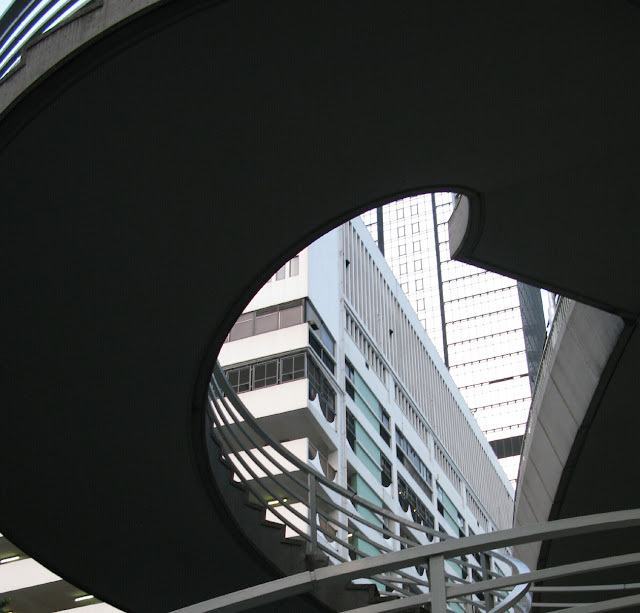 The shape of the scaffolding in the picture I posted last week reminded me of this picture from Hong Kong a couple of years ago, taken beneath the stairs leading up to an overpass.

Posted by Kathleen at 1:53 PM No comments: Links to this post 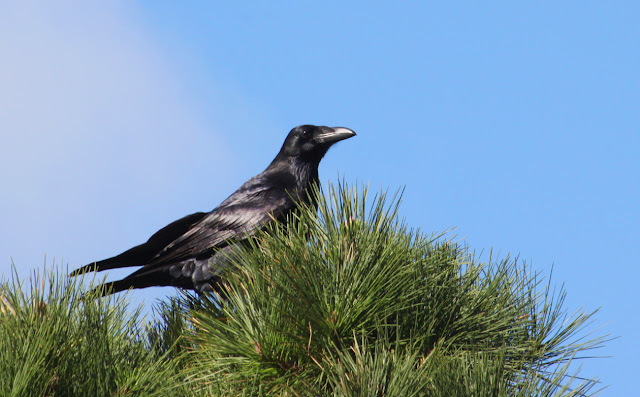 A raven in Half Moon Bay.

I'd never seen a raven in the wild before, and this one was lording it over some crows and blackbirds in a picnic area before flying up in this tree, and I was surprised once again by how huge they are.

I wouldn't say his eyes have all the seeming of a demon's that is dreaming, but if he or one of his friends should happen to take residence on a pallid bust of Pallas just above your chamber door, you too might well be driven to write mad gothic poetry about the situation. 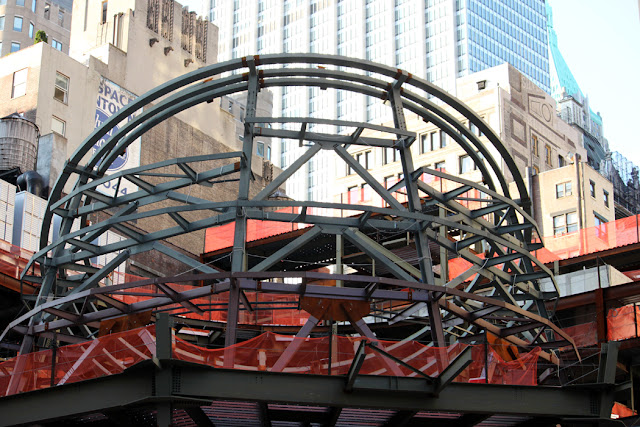 I have no idea what this scaffolding, in lower Manhattan, is for. I was in a cab, stopped at a light, and happened to have a camera available. I love the roundness of it, which in New York just seems a little wrong.

Posted by Kathleen at 7:56 PM No comments: Links to this post