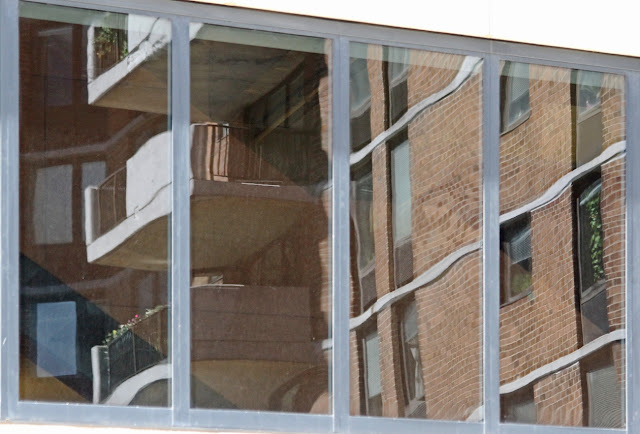 Even bricks seem to melt in this heat.

Posted by Kathleen at 6:40 AM No comments: 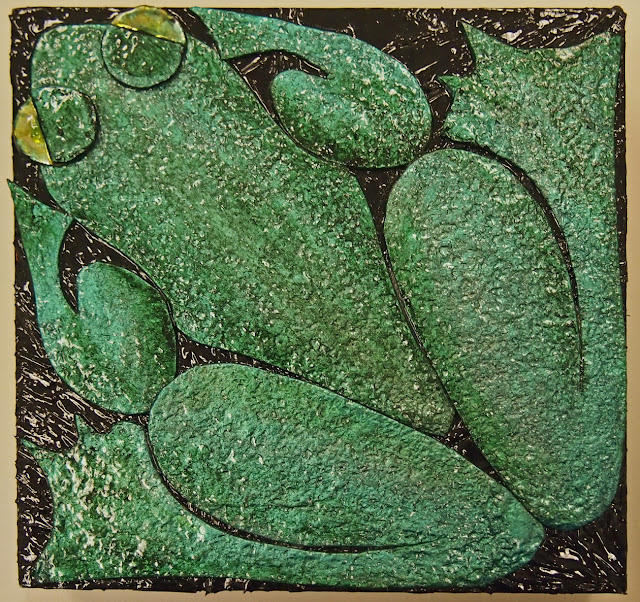 Here's a small piece I made this week, a gift for my friend Ann, artist and photographer and lover of frogs, who is retiring today. She had given me her hoard of cardboard lunch trays a while back, so it seemed fitting that I make her something out of them, adapting the design from an Art Deco tile I saw online.

It's just paper cut into frog legs and arms and eyes and painted green, and pasted onto an artist board I had painted black after a failed experiment in assemblage, but I like it very much.

I had to leave her party after five minutes and half a glass of champagne due to a software emergency, and it was a long sweaty trudge home in 95-degree heat, so I'm enjoying revisiting the soothing shiny greens of my frog and dreaming of other animals I could imagine into paper cutouts. 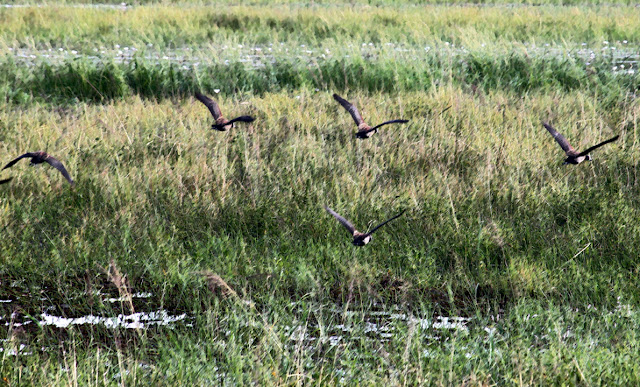 Instead of a closeup of a single bird, for a change here's a flock, white-faced ducks flying low over the grassy islands in the Chobe River in Botswana.

And now for something completely different 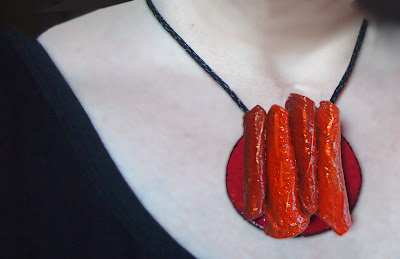 This is a different kind of exploration.

I've made jewelry for many years, out of all kinds of materials, and gradually that turned into bigger and bigger pieces until I was making paintings and assemblages that I sometimes refer to as my "wall jewelry."

My best pieces tend to be the ones where I start by playing with the materials, instead of having an idea and then trying to find materials to realize it. I've become more and more interested in recycling and repurposing things I'd otherwise throw out: plastic spoons and forks, candy wrappers, old CD's and DVD's. 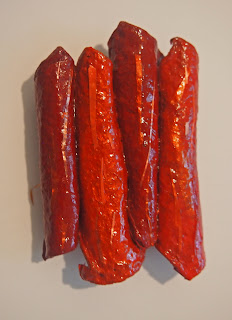 The cafeteria at my office has cardboard takeout trays made of thick rough recycled paper. It's very porous and sucks up paint like a sponge, but the texture makes interesting effects with glossy or metallic  finishes. Recently I tried soaking pieces in warm water after painting and then shaping them -- tricky because it's cheap paper and the layers have a tendency to fall apart -- and it gets a leathery look I like a lot. 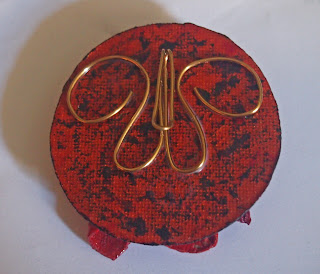 This is a pendant I made by shaping the painted paper into tubes and gluing them together (the orange is actually nail polish) and then to a base of a painted paper circle I had left over from another project.


Because it's so lightweight it doesn't need a heavy bail. I made a clasp out of wire that can hook onto any chain or necklace, glued it to the back, and voila! 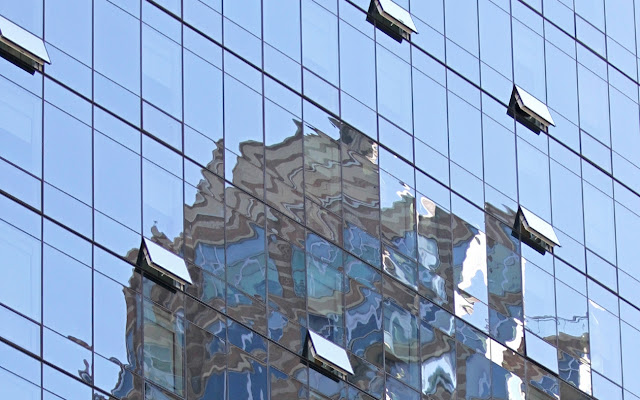 I confess to being a little burned out on photography after Africa. Or not photography so much as the aftermath, having to review and crop and fix and rename and classify all the damn photos that you're left with afterwards, especially if your batting average is as bad as mine is.

But here's a fairly recent reflection shot, the distortions carved into neat parallelograms by the windows.

Posted by Kathleen at 7:37 PM No comments: 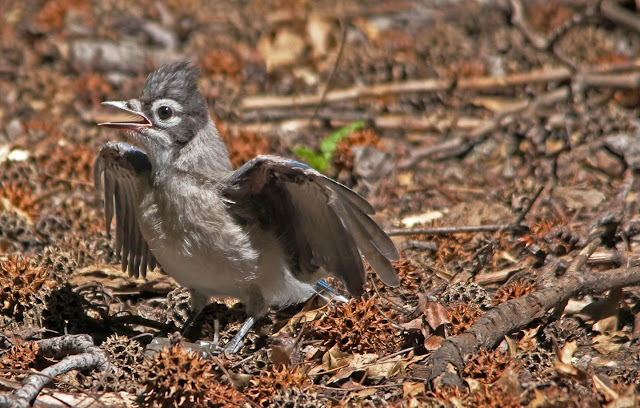 I can't resist posting this picture I took in the park yesterday of a fledgling blue jay who was still trying to get the hang of this whole "flying" concept. 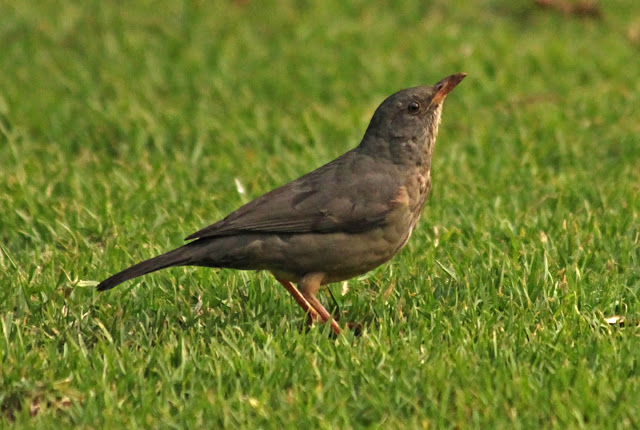 This is a Kurrichane thrush, hopping on a lawn in Johannesburg. Some of them had very orange beaks and legs, but this relatively somber specimen is my clearest photo.

Sick and a little homesick my last day in Africa, watching birds while I drank tea in the hotel garden, I paid more attention to these guys than I might have otherwise because the way they hopped around on the lawn reminded me of American robins -- though with a very unrobin-like habit of suddenly jumping up a foot or so off the ground to snatch a tasty insect. Our robins dig for their dinner.

I wasn't surprised when I looked them up in the field guide and saw the scientific name -- turdus libonyanus -- and realized that they're actually a close relative (American robins are turdus migratorius), part of the same wing of the thrush family. 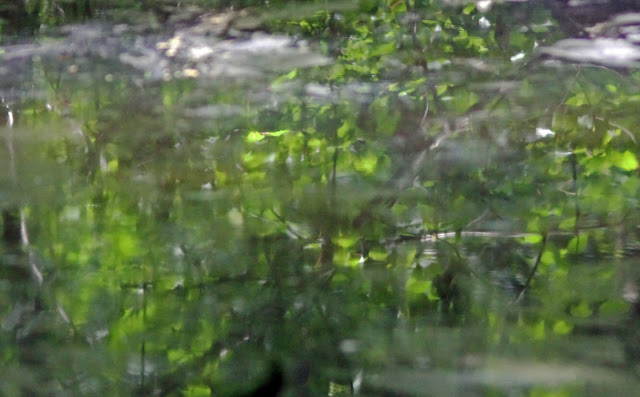 Reflections in the Azalea Pond in Central Park this morning, making a beautiful impressionistic summer abstract. 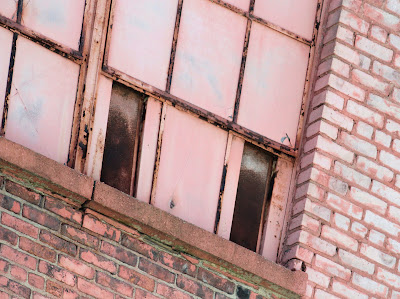 I'm sure someone thought that pink would be a cheery choice for this building.

They were wrong.
Posted by Kathleen at 5:14 PM No comments: 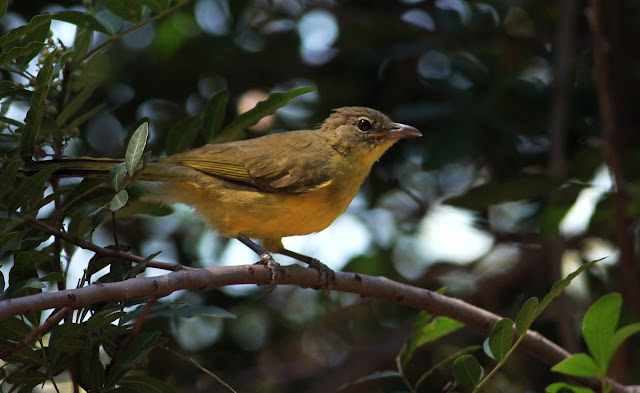 This pretty creature is a yellow-bellied greenbul, taken near the Chobe River by our lodge in Botswana. No long tail, no insect in his mouth, but at least he sat on an open branch where he could actually be seen, and admired. 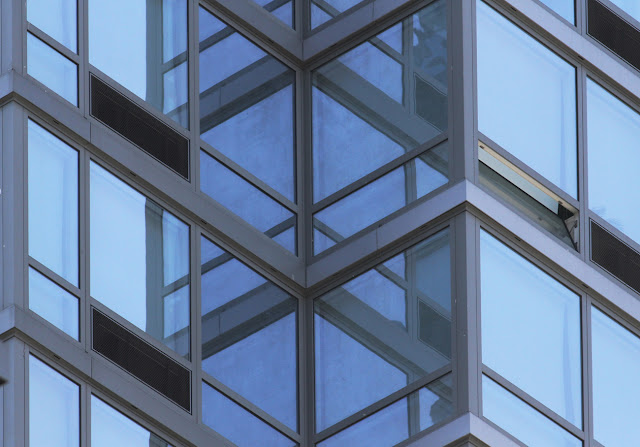 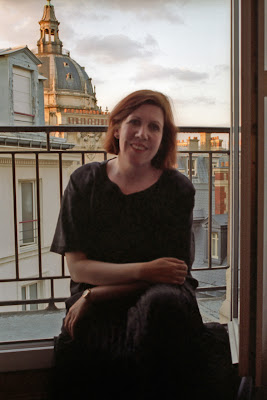 Wednesday's child is full of woe...

So claims the old nursery rhyme. I was born on a Wednesday, and now the clocks and calendars have ticked their way around to make my birthday a Wednesday again, landing where I started off oh so many years ago.

It's not the most spectacular of birthdays -- I'm home nursing a cold that would probably be going away by now if I'd taken better care of it sooner. But, as usual, crisis piled on crisis, urgency upon urgency, and 30,000 emails that I'd been inquiring about for the past ten months suddenly had to be handled immediately, and I went in to work on two drizzly days that now seem to have replicated themselves in my nostrils and lungs. I still had to do an urgent conference call this morning, but at least I got to do it lying down.

But I'm seldom woeful anymore, despite the gloomy predictions of Mother Goose. I'm grateful for all my blessings, mostly that I continue to find everything so interesting. I'm insatiably curious about this world, and amazed and awestruck by its infinite charms. Which do outweigh -- if only by a sliver, a hair, a quark -- the almost overwhelming list of its sorrows and tragedies.

They have not left me unscathed. But as Elton John might say, I'm still standing.

The picture is for no particular reason except that I've always liked it, me sitting on a hotel balcony in Paris on a June evening in 1995.

How the land remembers the river

Downstream, inside the Lower Zambezi National Park, and not that close to the water's edge, it's still left its mark. 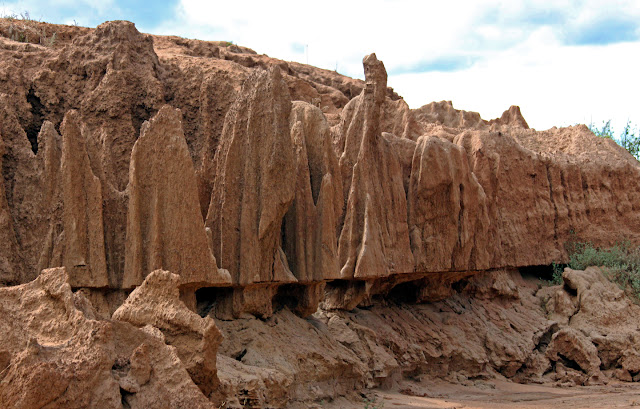 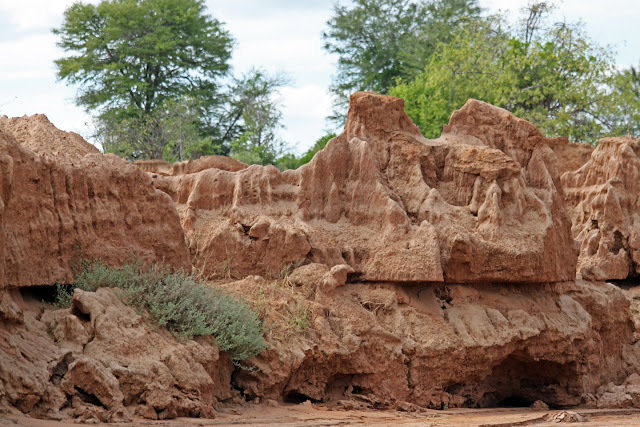 Posted by Kathleen at 5:30 PM No comments:

I thought I didn't get many clear pictures of the surreal eroded red landscape of Zambia, but I've found some more I want to share. These are the eerie riverbanks, where you can see tree roots almost completely exposed to the air, and trees that have died as a result, toppling into the water. Click to see better. 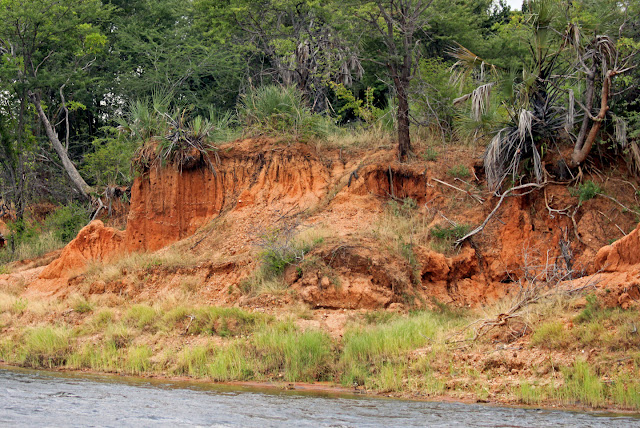 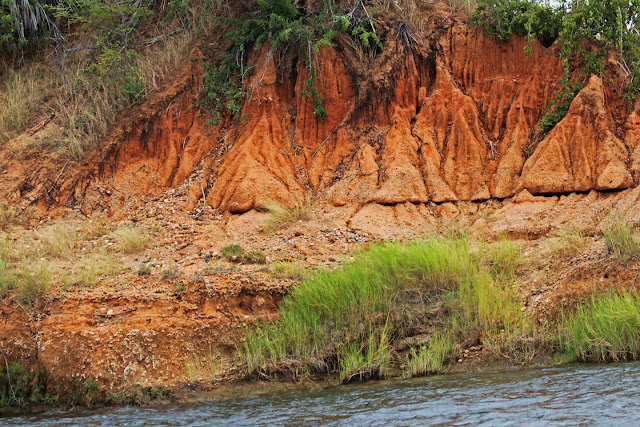 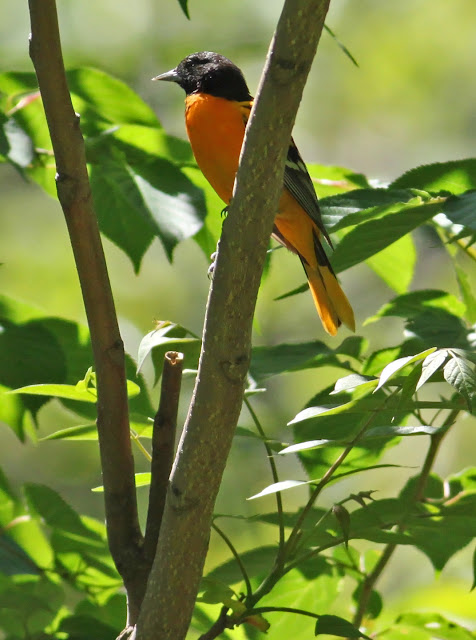 I missed most of the migrating birds in Central Park this spring, but here's one I did catch -- a Baltimore oriole, a vivid reminder that we have some eye-catching birds in North America as well.
Posted by Kathleen at 6:00 AM No comments: 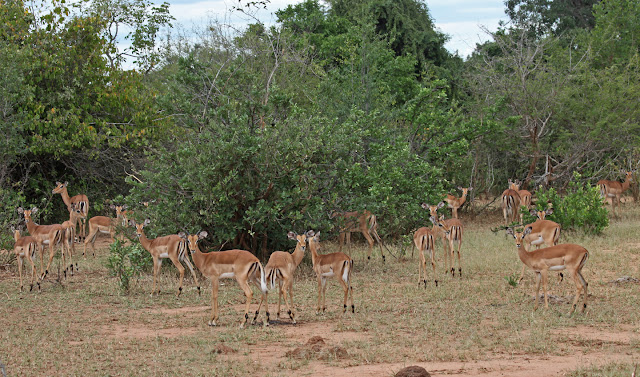 This is probably the end of Africa, except for some bird pictures I'll post on the usual Sundays. I overlooked this picture at first because it wasn't tack sharp, as the serious photographers say, but it captures some of how Zambia felt sometimes, as though the world was brand new and we were the first to see it.

Posted by Kathleen at 7:11 PM No comments: