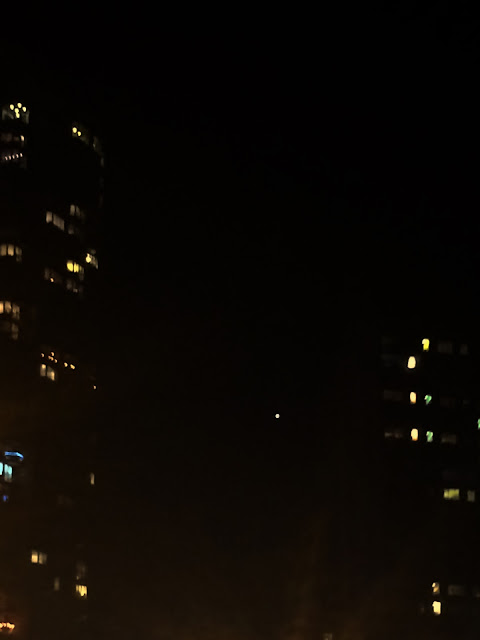 Is this a comment on what many of us agree was an unbelievable suckhole of a year -- sending it off with a pretty lousy sample of the photographic art?

Well, no. True, this picture is not likely to join my portfolio of gallery submissions in 2017, or like, ever, and yes, this year, by any measure, was Awful. Just, Awful.

But Venus was so high in the sky this week, and so brilliant, that it was not merely visible in Manhattan, it was dazzling. And watching it for two nights while I walked home from work made me so happy that I took this crappy picture with my phone just to remember the feeling. (Venus is the white dot in the middle of the picture, in case you're wondering. The other lights are apartment buildings.)

If Oscar Wilde had lived in New York, he would never have written, We are all in the gutter, but some of us are looking at the stars. You could spend months in a Manhattan gutter and never see a single star; the bright lights of my big city turn the sky into a dull opaque gray, and even bright planets like Venus or Mars are barely noticeable except under perfect conditions. So what, you might ask. No one on Venus cares about our Planet of Fools, and noticing a light in the sky that I happen to know is coming from a particular rock several million miles away does not improve my life in any detectable way.

And yet, it made me smile. It made me happy. It was a little gift from the universe, which has a memory much longer than our seasons or lifespans or election cycles. It was a reminder to look up, to look outward, to let go of the shoulder-hunched, gut-clenched posture I've adopted over the past several months, and think, calmly if I can, rationally if I can, about what comes next.

I don't know what that is yet. The helicopters are circling in the sky overhead, keeping an eye on the crowds in Times Square a few blocks away. Earlier when I was buying groceries, the cashier asked if I was ready for the new year. “No,” I said. “But it's coming anyway.” He thought that was hilarious. And now it's almost here, though I'll probably be asleep before the cheering starts.

Don't forget to look for the stars. Look up. Look around. Unclench. We'll get through this. 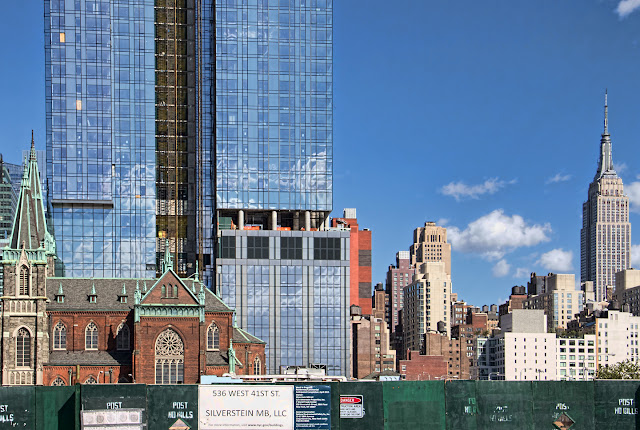 Well, not much reflection there, but on a dark December day, this cityscape from last summer cheers me up: the unlovely West Side, flanked by the very lovely Armenian church and the Empire State Building.
Posted by Kathleen at 5:30 PM No comments: 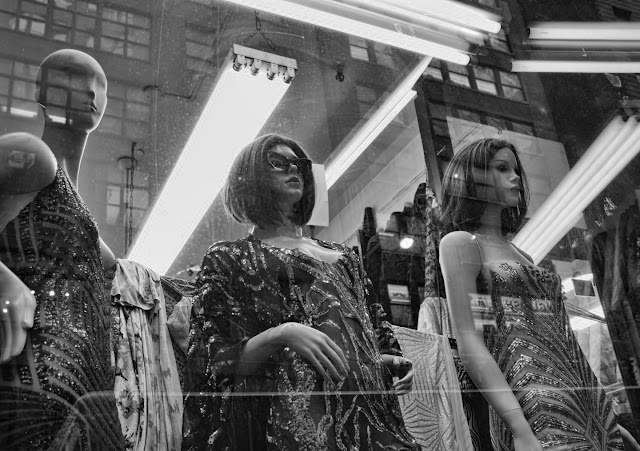 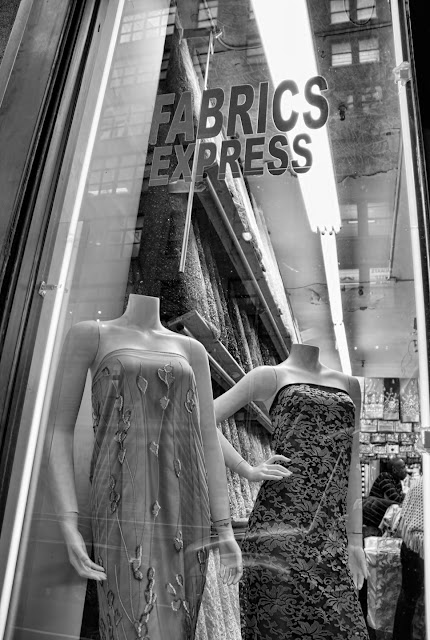 Posted by Kathleen at 7:07 PM No comments: 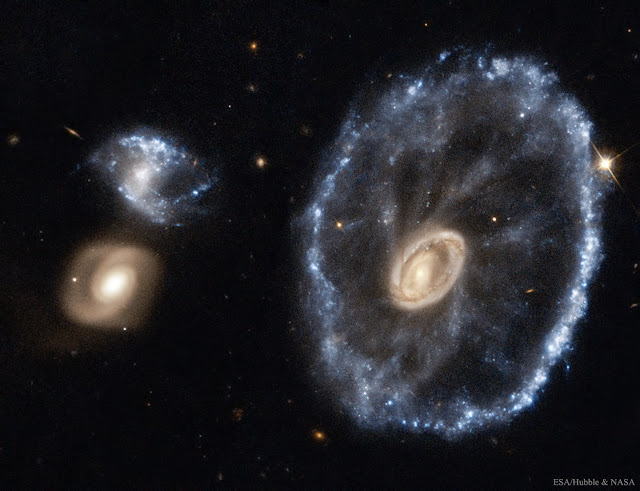 Images like this make it impossible for me to believe that the universe isn't really dancing, to a music deeper and slower than anything our puny ears can detect. Anyway, it does move, as Signor Galilei reportedly muttered under his breath at the Inquisition, and if I want to think of that movement as dancing, I will.

This is the Cartwheel Galaxy -- 100,000 light years across and 400 million light years away. Long ago one galaxy passed through another and what you see here are the ripples, like water in a pond when you've tossed a stone in.

Church of the Good Shepherd I meant to post this yesterday as it has a kind of Christmassy feel to it -- twilight at Lake Tekapo in New Zealand.
Posted by Kathleen at 5:21 PM No comments: 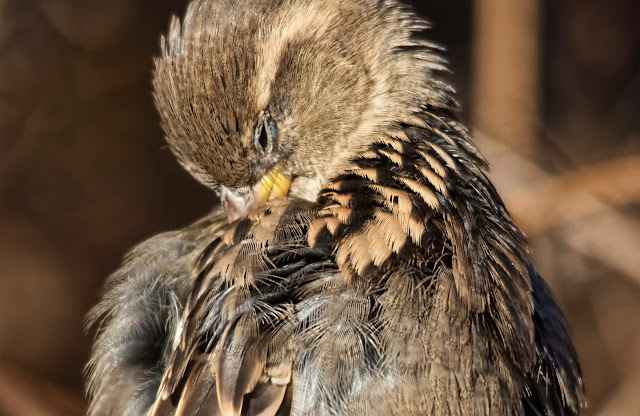 A female house sparrow grooming herself in the park this morning.

Posted by Kathleen at 4:16 PM No comments: 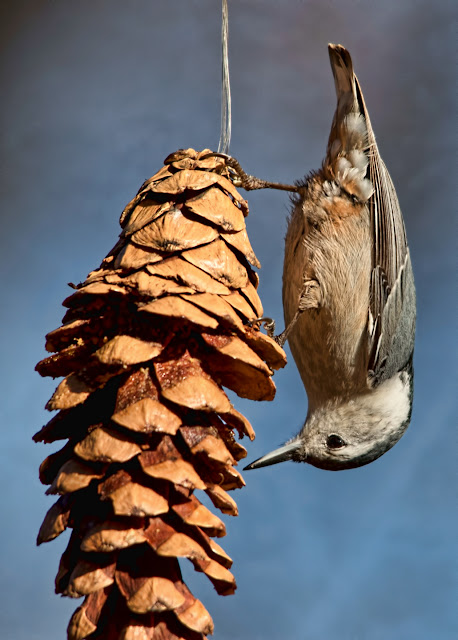 This year I was sorely tempted to take up celebrating Festivus instead of Christmas, but I'm afraid if I get started on the Airing of Grievances I'll still be going well into the new year.

So Merry Christmas, and here's a nuthatch displaying their typical disregard for dignity, decorum and the laws of gravity.
Posted by Kathleen at 2:29 PM No comments: 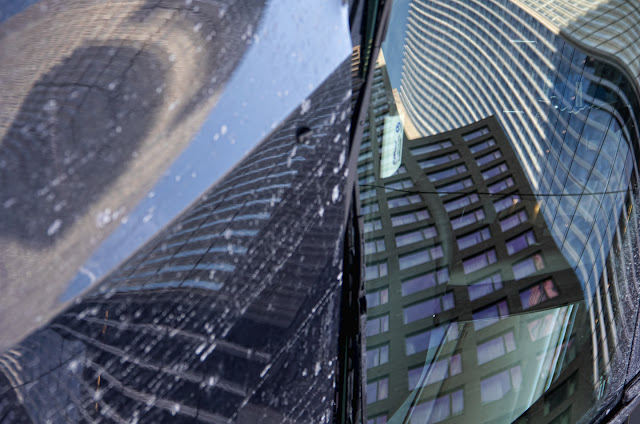 I did not write Wash Me with my finger on the hood of this car but it was a temptation. The reflections on the left would have been much nicer with just a little less dirt.
Posted by Kathleen at 8:59 AM No comments: 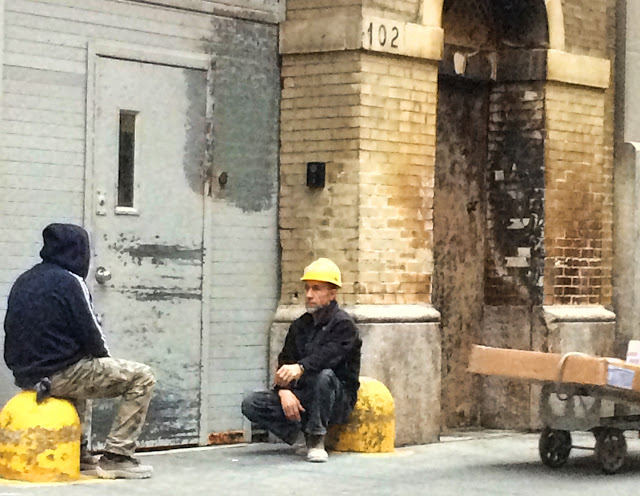 I took this with my phone while sitting in a cab on my way back to work after a doctor's appointment a couple of weeks ago. I just liked the way the men were sitting there, and I was in a yellow mood.

This is another example of the less than stellar phone lens with its odd distortions giving an old, almost oil painting feel to ordinary brickwork for an interesting effect.
Posted by Kathleen at 7:20 PM No comments:

Even I can see why this is called the Seagull Nebula; I can clearly see a bird swooping down with a dramatic, almost stylized, curve of wing. But a seagull wouldn't be my first idea -- more likely a bird of prey, with claws ready to snatch the poor little baby nebula cowering below. (Okay, maybe a seagull diving for a chunk of bread is a more attractive idea after all.)

The big blue star is Sirius, the brightest star in our sky, and just below and to the right of it, that smudgy bright spot is the star cluster M. Messier designated as number 41.

Posted by Kathleen at 8:21 AM No comments: 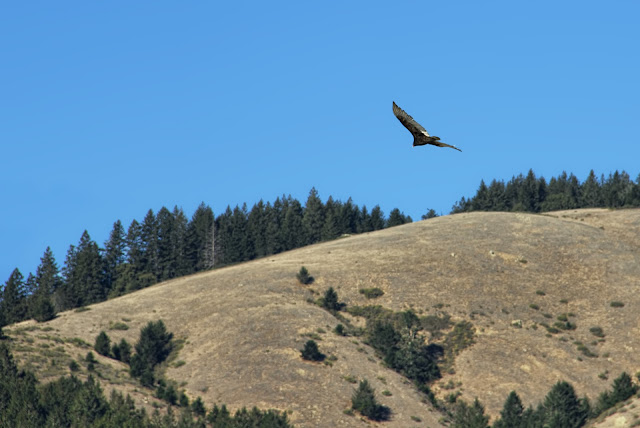 Because I didn't get to California this year, despite detailed plans and high expectations: a mediocre picture of a hawk over Stinson Beach, from last Thanksgiving.

Really just an excuse to quote Rumi on a gray day when I could use a little transcendence:

How do they learn it?
They fall, and falling,
they're given wings. 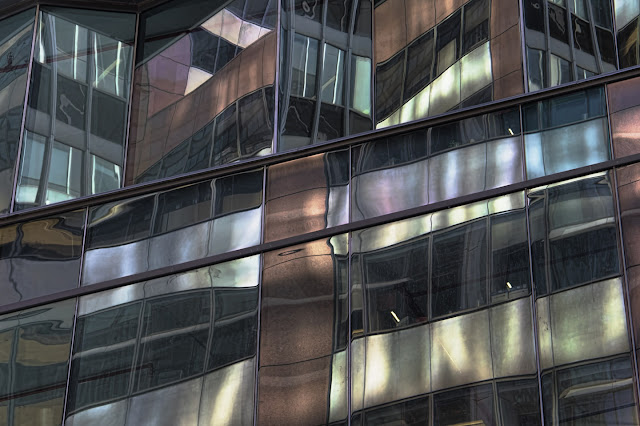 Equitable Tower always creates interesting reflections, in this case in some new construction across West 52nd Street. I love the texture of these strips of color -- almost like bolts of fabric.

I woke up in the middle of the night to snow tapping against the window and there's a soft white blanket over the world this morning. Unfortunately, it's going to turn to rain as the day warms up so I have to run out and do my errands before the streets turn into giant slush puddles.
Posted by Kathleen at 9:03 AM No comments: 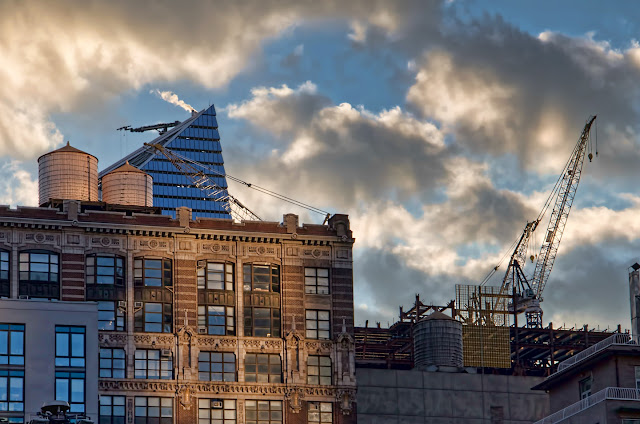 On the other hand -- who needs tinsel snowflakes when the soft golden light of an almost-winter afternoon can turn even the grittiest cityscape into something magical?

Posted by Kathleen at 8:49 AM No comments: 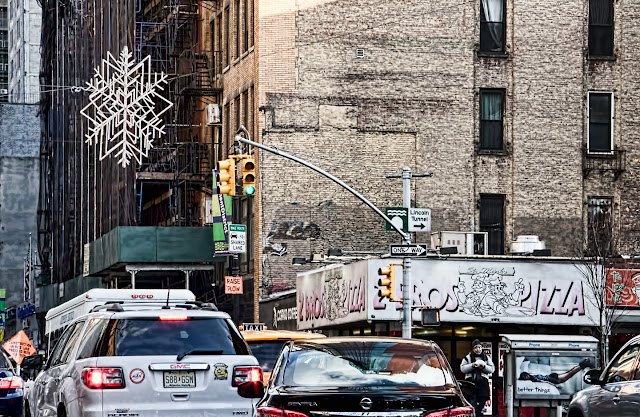 I'm guessing that somebody in some city planning bureau said, "Hey, those giant snowflakes look great on Fifth Avenue -- let's put some up on the West Side so you see them when you come out of the Lincoln Tunnel!"

Somehow the effect is not the same.
Posted by Kathleen at 8:19 AM No comments: 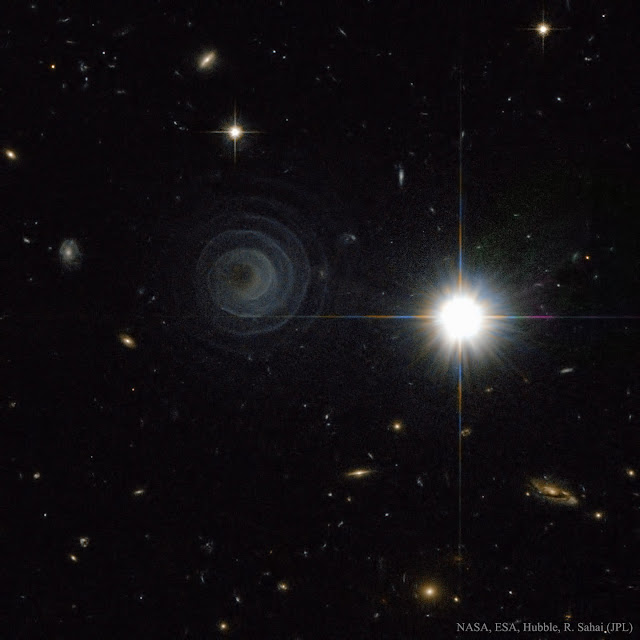 The Hubble team was actually interested in that strange spiral object on the left -- possibly a planetary nebula -- rather than the enormous Christmassy local star photo-bombing on the right.

But as usual I'm more fascinated by all the tiny galaxies dancing in the background. This is your universe, ladies and gentlemen, and it's a beautiful one.

Posted by Kathleen at 7:59 PM No comments:

What the light is good for 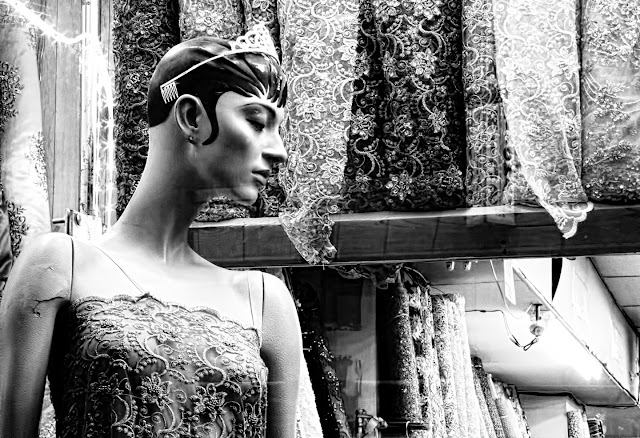 I took this one yesterday, on West 39th Street.

I've always been fascinated by what remains of the Garment District, West Manhattan in the Thirties, just south of where I live in Hell's Kitchen. There are still manufacturers there, mostly high-end designers, and back when I cared more about how I dressed I went to the occasional sample sale, riding up scary elevators in warehouse buildings on a Saturday afternoon and leaving with a designer coat for $150 cash.

At street level there are the suppliers, fabric stores and trimming shops and sellers of sequins and jewelry supplies and sewing machines. I used to buy colorful odds and ends there to make jewelry, and I still have some beautiful brown cashmere fabric I bought for pennies at a going out of business sale that I will turn into a jacket someday.

I've been taking pictures there recently because it's an easy walk on even raw blustery December days, and I'm attracted by the bright colors of the bolts of fabric and racks of thread in window displays that appear not to have changed in the past fifty years. But this picture -- which I love -- makes me think that focusing on colors isn't the best way to capture this place.

Posted by Kathleen at 4:31 PM No comments: 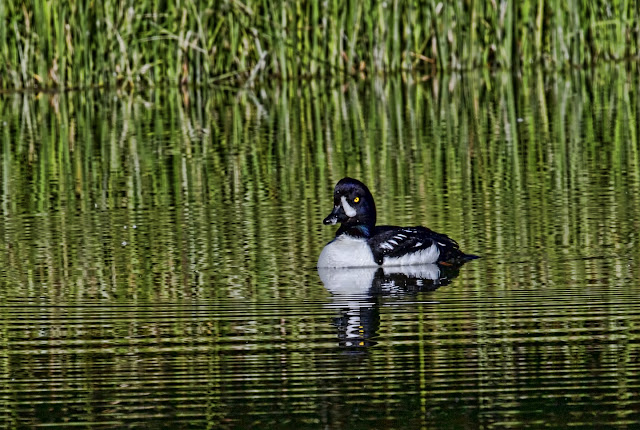 Old stuff, still -- I have not had much luck with the light on days when I could conceivably have been hunting down the local avians, so I don't have any recent pictures to post.

This is an appropriately named goldeneye, in Grand Teton National Park.
Posted by Kathleen at 3:54 PM No comments: 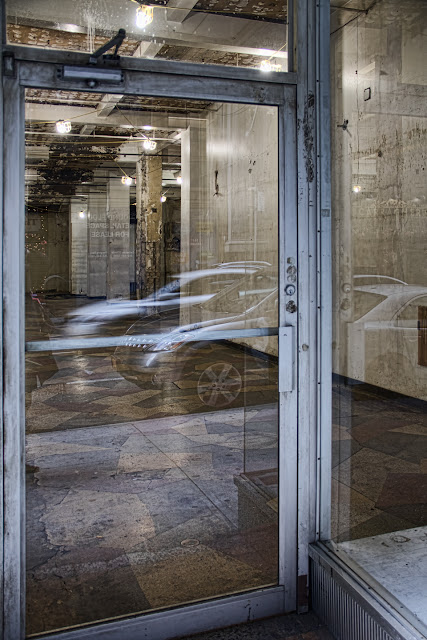 An empty retail space in the midst of the fabric stores and notions shops on West 39th Street in the Garment District.
Posted by Kathleen at 8:10 AM No comments: 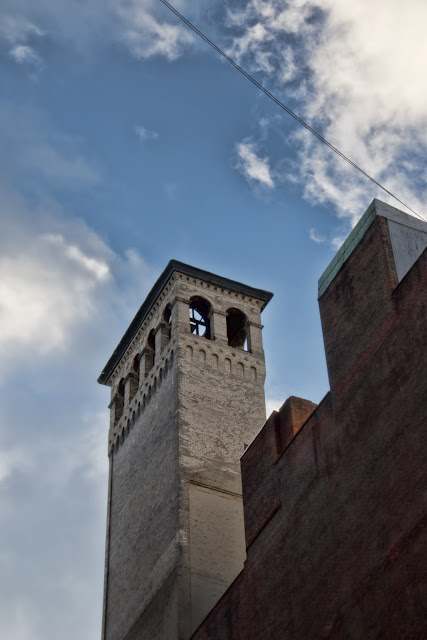 This looks like the bell tower in some Tuscan hill town, but it's actually an anachronistic adornment on an old industrial building turned big box store in Chelsea. 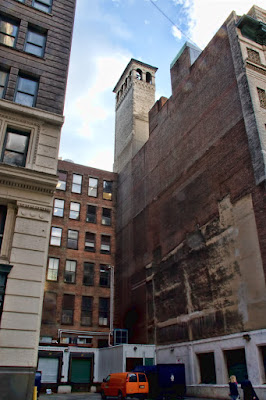 Posted by Kathleen at 7:49 PM No comments:

From the hotel archives 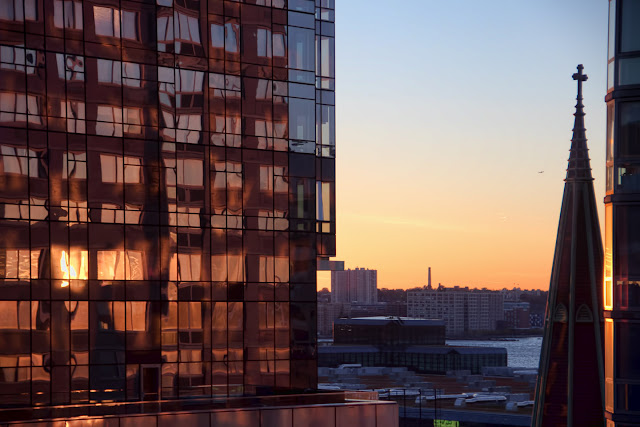 Pretend this is a sunrise instead of a sunset and it's a pretty way to start the day.

Posted by Kathleen at 8:25 AM No comments: 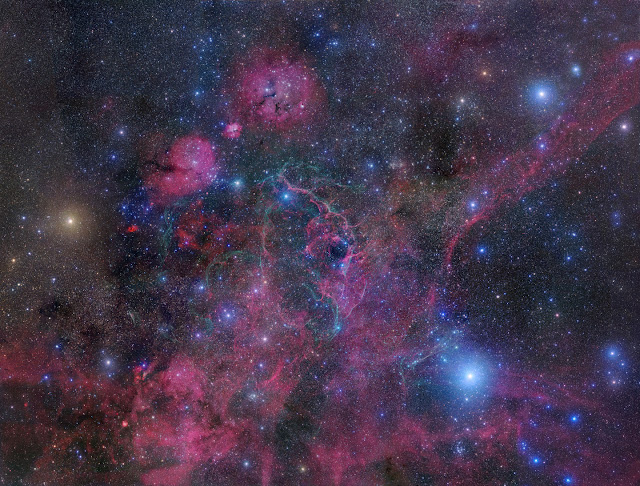 I know what you're thinking -- A nebula!

Silly Grasshopper. This may be a pretty picture of colorful tendrils of light, but that doesn't mean it's a nebula. This is more properly referred to as the Vela Supernova Remnant, the gases from a massive star explosion approximately 12,000 years ago.

But, you may ask, the Crab Nebula is also the result of a supernova -- why isn't it called the Crab Supernova Remnant? The easiest answer is that we've been looking at the sky for a long time, long before we had any idea what we were looking at, and the word nebula, from the Latin for cloud, was applied to any fuzzy-looking bright patch in the sky. This could and did include objects that we now know are galaxies and globular clusters and star nurseries as well as supernova remnants.

Things that weren't easily visible before the invention of high-powered telescopes got more precise names. End of lesson.

Posted by Kathleen at 8:13 AM No comments: 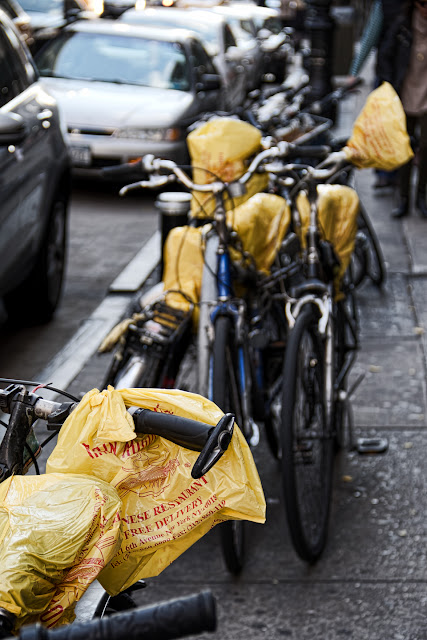 A fleet of bicycles on Sixth Avenue, ready to deliver Chinese food to hungry New Yorkers.

I don't quite get why they're festooned with empty plastic bags -- do the delivery guys have to bag the food themselves as it comes out of the restaurant? -- but it makes for a nice picture.
Posted by Kathleen at 8:08 AM No comments: 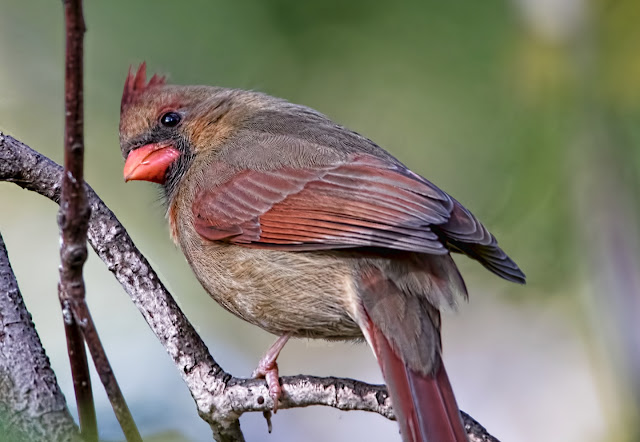 Another shot of the female cardinal from a few weeks ago, for Sally.
Posted by Kathleen at 11:33 AM No comments: 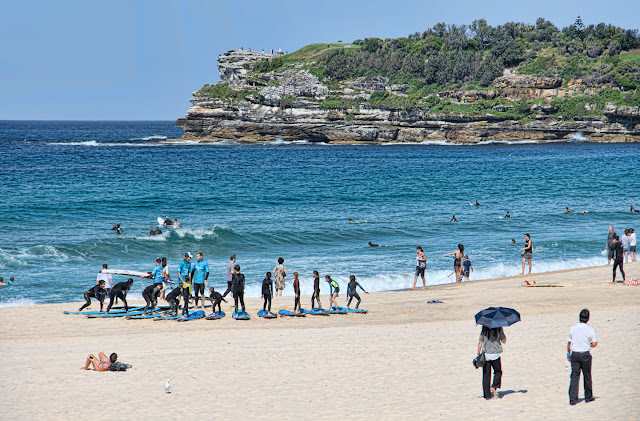 Well, urban if the city in question is Sydney: learning to surf on Bondi Beach.

How ridiculously idyllic is this -- well minus the killer jellyfish and occasional great white?
Posted by Kathleen at 7:08 PM No comments: 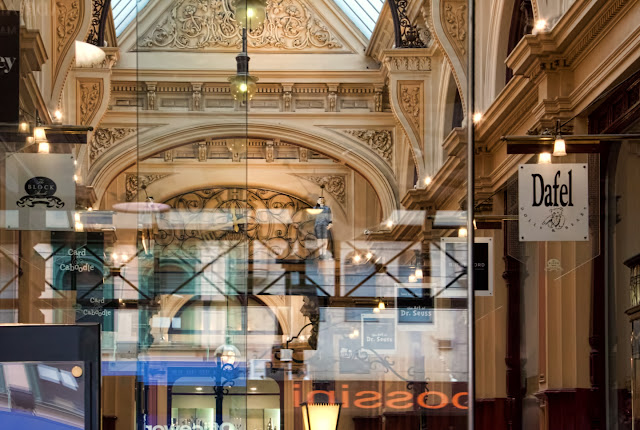 Peering into the Block Arcade in Melbourne from the street outside.
Posted by Kathleen at 9:21 AM No comments: