On the Avenue I'm taking you to, 42nd Street 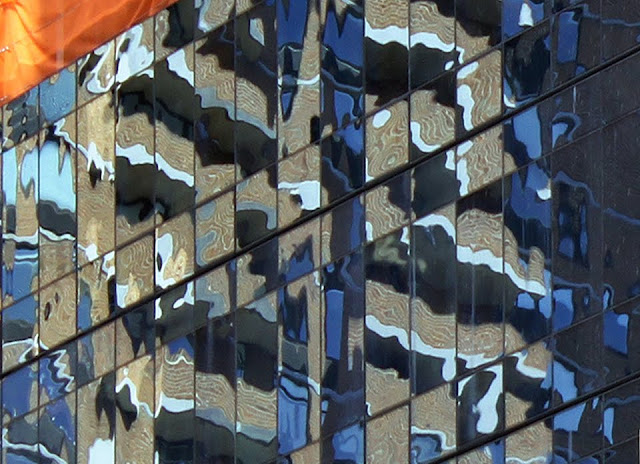 Maybe I like reflections because they abstract themselves. This is a new building going up on 42nd Street, so the glass panes are still clean and don't add more noise to my photos.  Zoomed in like this, it's all blue and brown waves, reflections of nothing much.

But shrink it down and suddenly you can make out the windows and balconies of Manhattan Plaza across the street, see the brown bricks and white panels. And where the blue comes from -- this building, reflected back at itself, maybe -- remains a mystery.

Posted by Kathleen at 4:34 PM No comments: 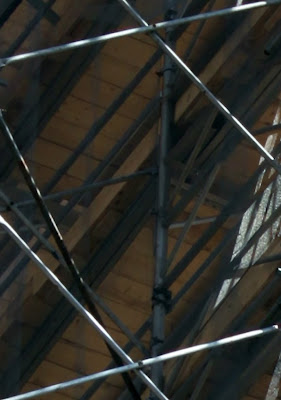 Not an abstraction so much as a jumble maybe -- a small piece of a very large scaffolding on Tenth Avenue where yet another Hell's Kitchen high-rise is going up.  Even though half a dozen towers have gone up in the past several years, there's so much new construction that almost every photo I take of window reflections in the neighborhood has flashes of orange. 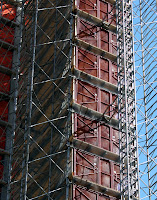 Posted by Kathleen at 6:23 PM No comments:

I have measured out my life with conference rooms 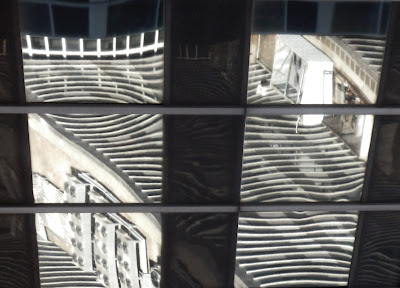 How many hours and days of my life have been spent in conference rooms is not something I would ever dwell on. Let's just say that the number of those hours that have been spent productively is far smaller.
Most of our conference rooms are on the same side of the building, so the view through the windows is similar: our building, reflected in the windows of the building across the street. And perhaps my fascination with reflections stems in part from how much time I have spent staring at those windows while another painful meeting drags on and on.

The picture above is a variation on the same old patterns I've been looking at for so many years, as seen at the right. Rotate the picture and suddenly it's not so obvious what you're seeing. Those wavy walls are now horizontal. Is that a roof? A grid? Some kind of stadium seating where something interesting is about to happen? Suddenly there are possibilities, something that is alas in short supply in most conference room gatherings.
Posted by Kathleen at 10:10 PM No comments: 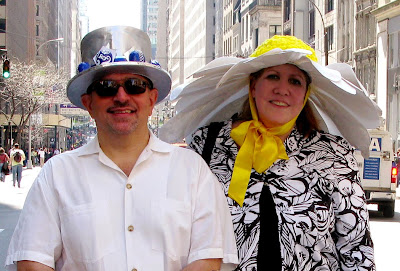 I'd never been to the Easter Parade before. I'd seen some of the participants, in passing, while I was rushing off somewhere else, but really going to the Easter Parade means dressing up and sashaying down Fifth Avenue, and most importantly, wearing a really significant hat. So last Tuesday when my friend Michael suggested that we should go this year, it left a mere five days for hat-making. That is a lot more time than they ever get on Project Runway when they have to make a red carpet gown out of old newspapers and actual red carpets, but I could have used another week or two. (I did have to go to work and my job does not include millinery breaks.) On Sunday morning, an hour before we were supposed to leave, I was still gluing Easter eggs and fixing petals.
But the hats were good enough to attract many smiles and more compliments, and literally hundreds of photographers. It was a little bit like being, well, on the red carpet. 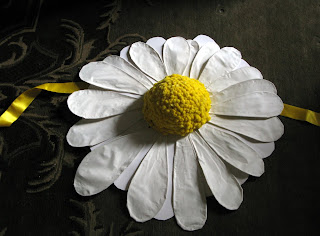 Here is my hat in repose, after a strenuous afternoon spent posing for photographs.
Posted by Kathleen at 10:00 PM No comments: