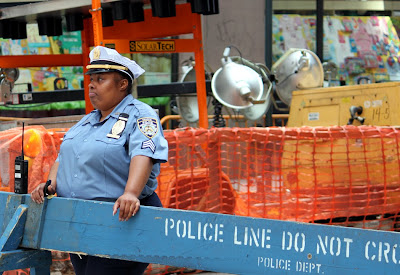 Boredom is probably not a bad thing if you're a cop in New York, but standing around working street closings on a steamy day in August can't be fun. I love the expression on her face.
Posted by Kathleen at 6:00 AM No comments: 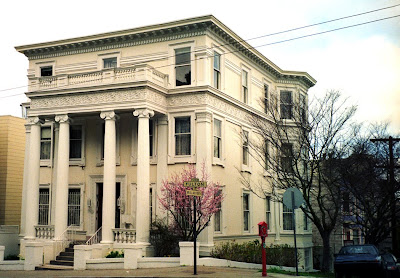 Flashback is the appropriate word here -- this is 2400 Fulton Street, which, when I was growing up around the corner, was owned and occupied by the members of Jefferson Airplane.

We used to sit on the concrete ledges in front to wait for the bus to school every morning, and the previous owner used to let us play in the backyard, so we felt very proprietary about the house and didn't see why we had to stop snooping around just because someone else lived there.

Sometimes we rang the doorbell and talked to whoever answered: Jack, Jorma, Marty, unknown young women with long hair and miniskirts. (Never, much to our disappointment, Grace.) I was only inside once, on Halloween, when we were invited to scoop loose M&M's out of a huge plastic bag. No other children had come by so they encouraged us to take all of them, thousands and thousands of candies. Which, of course, my mother made me throw out. 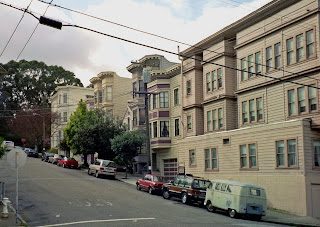 The house was white when they bought it, and then it was green, and then for many years, black with gold trim. In 1994 it was back to this unadventurous cream color, but it's still a mansion in a neighborhood that has never really required one.

Viewed from behind, from the street below, it looks more like its neighbors, which are mostly flats and apartment buildings, with an occasional single family house.
Posted by Kathleen at 1:34 PM No comments: 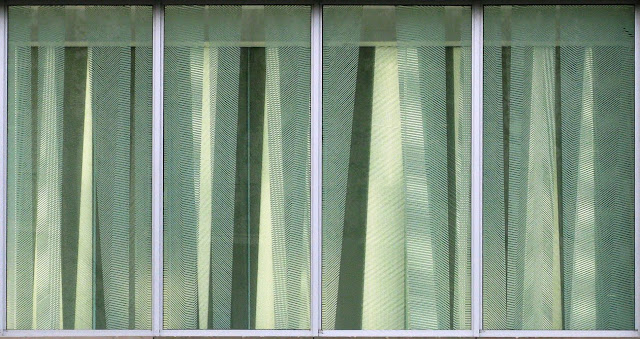 Here's a different sort of window shot, from the H&M store on Las Ramblas in Barcelona. The texture of the vertical blinds doesn't come across perfectly online, but I love the way the shapes suggest obelisks or futuristic skyscapers.

Posted by Kathleen at 2:48 PM No comments:

The Gibraltar Chronicle ("Gibraltar’s newspaper for over two centuries for all the latest Local and National News") has a jaunty, very English tone, with lots of bad punning headlines, but the content consists almost entirely of bitching about Spain and the local officials across the border. They are, however, very pleased with the opening of a new prison, HMP Windmill Hill (which sounds more like a new-age resort than a prison), replacing the "medieval" Moorish Castle Prison (which sounds, well, medieval.)


A gift too that the Moorish Castle is finally free to become the public building it should long have been. There are great opportunities to exploit its lime pit, gallows and other grim assets in a way that both preserves history and improves the educational/tourism product.

Somehow I don't see "Come and see our lime pit!" as a successful slogan for the Gibraltar tourism industry. Even if you throw in the gallows.

Posted by Kathleen at 9:53 PM No comments: 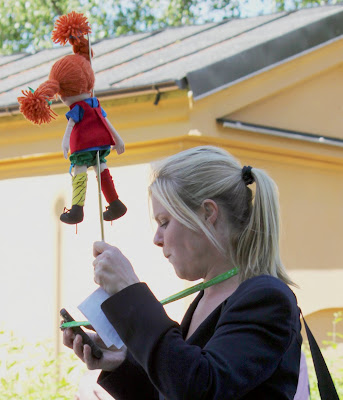 A tour guide in Stockholm. Instead of the usual umbrella, or bus number on a stick, she's identifying her group by a disturbingly impaled Pippi Longstocking.
Posted by Kathleen at 6:00 AM No comments: 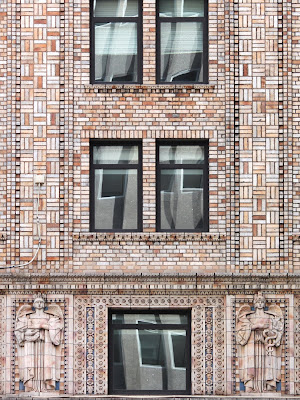 Even the most ordinary buildings in Manhattan have architectural flourishes, and you find elaborate stylization in the most unexpected places -- this building on Park Avenue, for example. Bricks, and the most mundane modern windows imaginable, and then these fierce terra cotta angel warriors guarding the foundations. And no doubt weeping over the venetian blinds a few stories up.

(This is the Pershing Square Building, across from Grand Central.)

Posted by Kathleen at 8:23 PM No comments:

She walks these hills in a long black veil 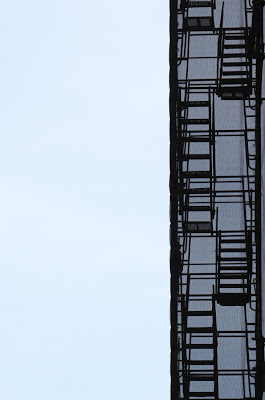 This is just a fire escape, draped for some reason -- renovation? repainting? -- in black netting, turning the most common of New York objects into something strange and new.
Posted by Kathleen at 3:50 PM No comments: 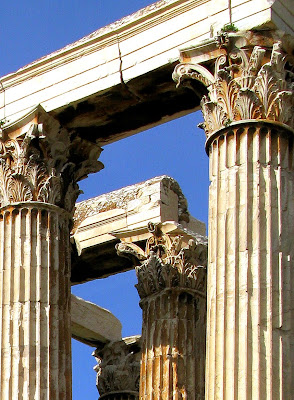 Just a reminder of who invented that whole geometry thing: some pleasing angles in a closeup of the Temple of Olympian Zeus in Athens last November.

This temple is just a few blocks from the Acropolis, but feels like a different universe. There are no crowds, no ice cream and bottled water for sale, no souvenir vendors, no musicians, no schoolchildren. You could easily walk past the park and never even notice that there's a temple there, and apparently most tourists do. There were only two or three other people there. 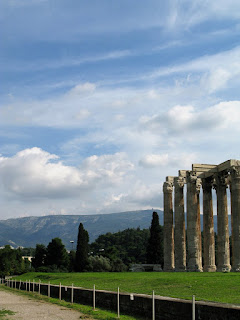 Here's a shot of the park. Unremarkable, except for the ruins.
Posted by Kathleen at 9:05 PM No comments: 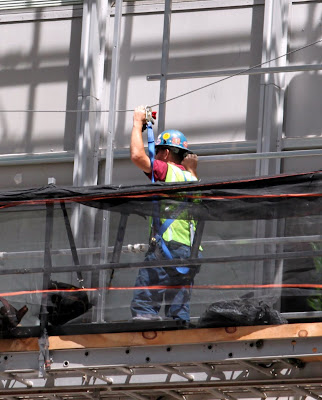 A window-washer on Madison Avenue.

I am absolutely confident that this is the one job I couldn't do even if I were starving and it was my only option. And the fate of humanity and the lives of a hundred kittens were hanging in the balance. Many years ago, the father of a woman I knew was left hanging off a building for more than an hour after his scaffolding collapsed and his partner fell to his death. I still can't think about it without goosebumps.

No matter what happens to most of us at work, we will never have a day like that.
Posted by Kathleen at 7:39 AM No comments:

Reading about the various legislatures of the world does at least make me feel a bit more charitable towards the US Congress. They're awful, but they're not uniquely awful. There is something about getting a group of politicians together in a room with microphones and gavels that guarantees you will not be seeing humanity at its most inspiring.

The Legislative Assembly of the Falkland Islands recently required seven speeches to discuss a motion to adjourn. But they are at least refreshingly civil to one another, which is probably a necessity when you live on a remote group of islands with only a few thousand other people. It's not as though you can avoid running into each other at the supermarket.

But you do have to like any legislature where the speeches begin with "Mr Speaker, Honourable Members, I wish to begin with tall poppies and Mexican Crabs" and go on to this:

Mr Speaker, July was an entertaining month -the World Cup for us football phonetics and also Farmers’ Week. There’s only so much excitement any man can take. This was, of course, my first Farmers’ Week and I’ve nothing to compare it to. All of the sessions were well attended and I sensed an air of optimism and hopes of a bright future for farming. All that we can do as an assembly is to create opportunities. It is now up to others to seize the day; and hats off to all those involved in the setting up of the Falkland Islands’ Meat Company many years ago. It took a fair amount of vision. I said this before – “FIMCO might not be the ‘last chance saloon but there aren’t too many watering holes for farming after this one.” 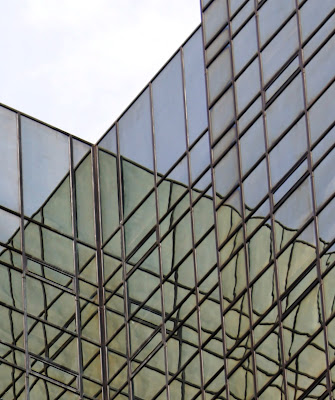 Another view of the Grand Hyatt.
Posted by Kathleen at 9:43 PM No comments:

I haven't put up a New York reflection recently so here's a good one -- the Grand Hyatt on 42nd Street.

I've always loved newspapers, and one of the first things I do in any new city is buy the local paper, even if I can't understand the language. So naturally one of my Internet pleasures is reading the English-language newspapers around the world. The professional, well-written sites are often the least interesting, just insufferable expatriates spouting off for each other.

The more obscure sites don't just have the charms of mangled English; they also provide interesting and sometimes inadvertent glimpses of the culture. The UB Post in Mongolia, for example, has the usual links at the top of the main page:  Politics. Business. Sports. Entertainment. Mining. Mining? That is apparently very important to Mongolia, which somehow I had never known.


The First Democratic President of Mongolia Ts. Elbegdorj is launching a work to get au fait with activities of state institutions.

He is mobilizing all available efforts for establishing justice and he is one of people, who want to change unequal serving law. Thus, the President will be get acquainting with activities of supreme courts in Chingeltei district and Ulaanbaatar at 10.00 am, today.

I couldn't have said it better myself.

Posted by Kathleen at 9:57 PM No comments: 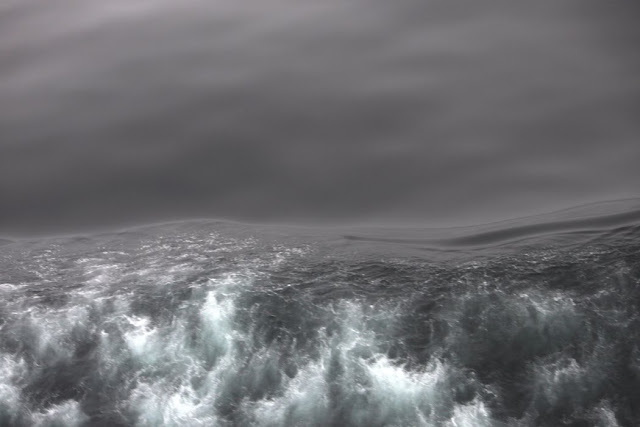 Okay, no one's actually working in this picture. This is the North Sea again, a little turbulent this time, much like the stomach of the average American worker these days. Those of us who are fortunate enough to have jobs, that is.

Posted by Kathleen at 6:02 AM No comments: 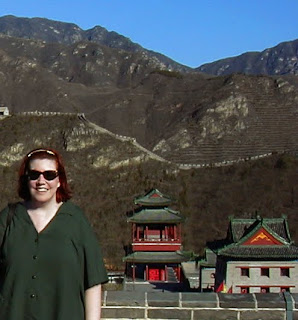 This was my second trip to China, training and upgrading software in our Beijing office. It was my manager's 40th birthday and we celebrated by taking the afternoon off and driving to the Great Wall.

During my previous visit the year before, the air had been thick and filthy, and sometimes we worked so late the streetlights had been turned off and we walked the mile or so back to the hotel in a soupy smog that made the wide boulevards of modern Beijing feel more like Victorian London. We all got sick and honked disgusting black-flecked snot into hundreds of flimsy Chinese tissues. The office staff took us to a local clinic, where the doctor took my pulse for several minutes, asked through a translator about the shape and consistency of my bowel movements, and then told me I had bronchitis. I was prescribed packets of herbal medicine and I honestly don't remember if it worked; I only remember the taste, like the clippings from a recently mown, very muddy lawn.

The difference in 1999 was startling. The 50th anniversary of the founding of the People's Republic had been celebrated a few weeks before, and the government had prepared by cleaning up the streets of Beijing, banishing the beggars and banning the burning of coal during daylight hours.  There were still some smoggy days, but there were also clear sunny days like this one, when you could see the Wall snaking along the mountains for miles in each direction.

Unfortunately, I had bronchitis again (I don't look pale only because my hair was that startling fire-engine red) and when the rest of the team took off to climb to the top of the wall, I found myself having to sit down and rest every fifteen or twenty steps. One European couple that passed me by chided me for sitting. "You won't get far if you sit. Your muscles will freeze up." But I kept climbing ten steps and resting, climbing fifteen steps and resting, and eventually I passed the European couple, who'd given up at the first level, and met my team at the balcony on the second level, where we posed for more pictures and proclaimed ourselves heroes for climbing the Great Wall, as Mao had said all heroes must.

That couple had a point about muscles freezing up though. Climbing down was much harder than climbing up, and the next morning I had to slide down the stairs from my bedroom on my ass.

Posted by Kathleen at 2:45 PM No comments: 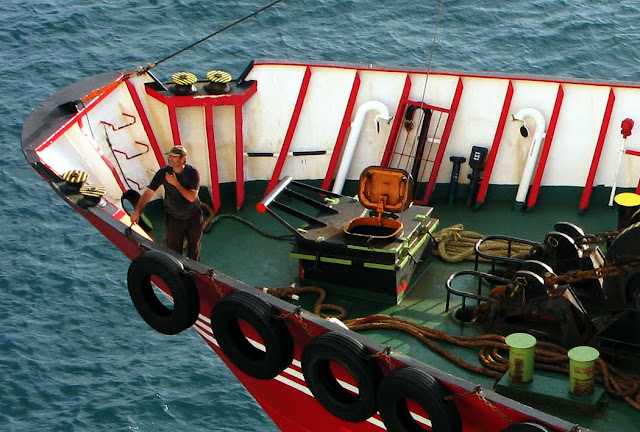 A worker on the Maltese equivalent of a tugboat or harbor patrol. He seemed to have some role in guiding cruise ships into Valletta harbor, and judging by the protective tires along the hull, sometimes this is a contact sport.
Posted by Kathleen at 6:00 AM No comments: 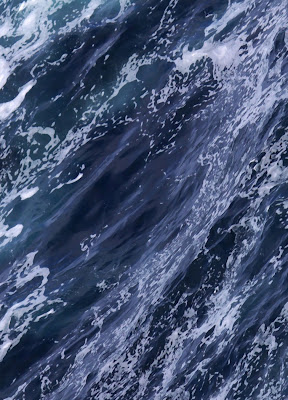 The North Sea poses for a close up, in all its chilly grey-green glory.
Posted by Kathleen at 5:00 PM No comments: