We are experiencing technical difficulties

My laptop is seriously indisposed, though I am hoping that the denizens of the Genius Bar will live up to their name and make it all better.

In the meantime, I have just discovered the wonderful Dictionary of Obscure Sorrows, which invents and immortalizes words that should actually exist already.

n. the frustration of photographing something amazing when thousands of identical photos already exist—the same sunset, the same waterfall, the same curve of a hip, the same closeup of an eye—which can turn a unique subject into something hollow and pulpy and cheap, like a mass-produced piece of furniture you happen to have assembled yourself.

Posted by Kathleen at 6:00 PM No comments: 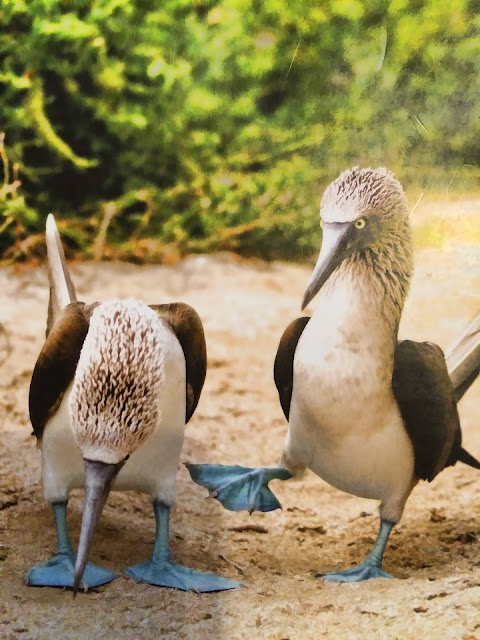 Blue-footed boobies in the Galapagos, of course -- this may be the most unmistakable bird on the planet.

This isn't something I dug out of my own extensive collection of boobie-graphs, though -- this is actually a shot I took Friday of the postcard I left in Post Office Bay almost two years ago, which was finally delivered to my friend Jayne's apartment building last week.

It was somehow more exciting to see this old message finally arrive, transported entirely by the goodwill of strangers, than any snail mail I've received in -- well, maybe ever.
Posted by Kathleen at 11:33 AM No comments: 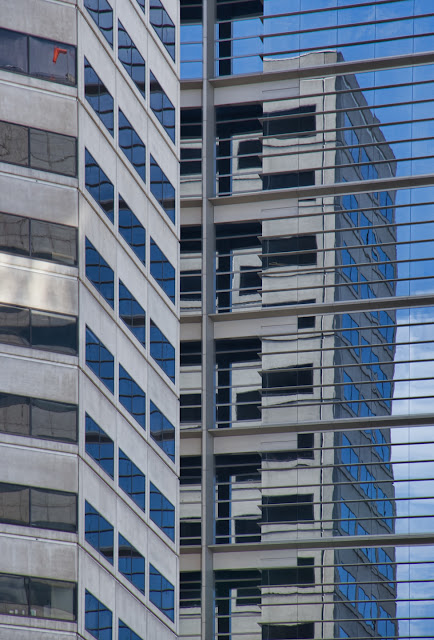 It's not immediately obvious just what is the reflection here, which is why I like these otherwise unremarkable buildings in downtown Portland.
Posted by Kathleen at 7:02 PM No comments: 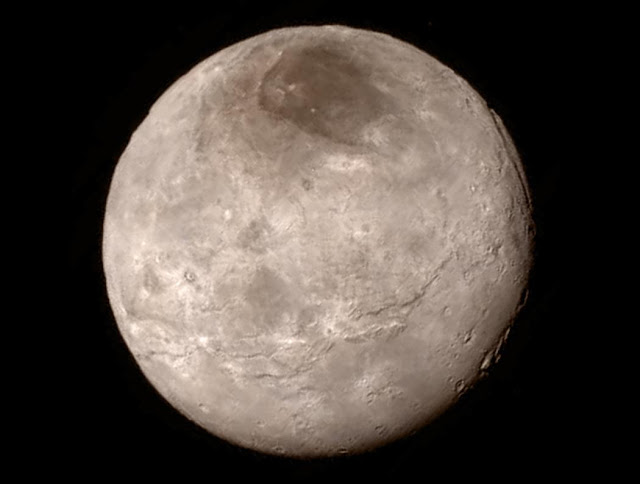 It may not be as dramatic as one of those colorful Hubble snaps of a galaxy or a nebula, but this New Horizons shot of Charon, one of Pluto's moons, is irresistibly cool. I'm just in awe that we now have such detailed photographs of a member of the family that even the Hubble saw as nothing more than a few bright pixels.

Charon was discovered by James Christy in 1978 when he noticed that the images of Pluto that he was studying periodically had a small bulge, really just a few more dots in what we non-professionals would recognize as "a small blob of dots." Although Charon, boatman to the underworld in Greek mythology, is a perfectly appropriate name for a satellite to a planet named after the Roman version of Hades, Christy actually made it up, using the first syllable of his wife Charlene's name, and adding -on to make it sound more scientific. So although most people pronounce the name like the mythological figure with a ch- or hard k- sound, astronomers pronounce it sharr-on as a tribute to Mr. Christy and his wife.

Posted by Kathleen at 9:53 PM No comments: 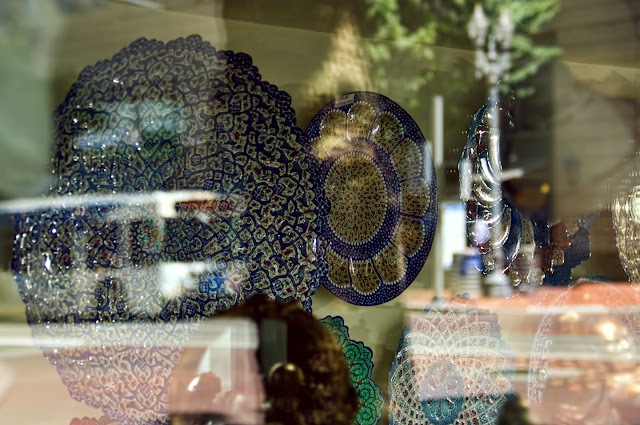 This is the window of a store called Art of Persia in Portland. It was closed when I walked by, but these plates caught my eye. I didn't actually see ceramics like this in Iran, but those patterns, and the overlapping petal shapes like a flattened squinch, were immediately familiar. They caught my eye, and now that there's a tentative deal to lift the sanctions and I've been hoping things are going to get better for the many lovely people I met there, my heart.

I couldn't get clear shots of most of the patterns because of the reflections but it makes a pretty abstract. 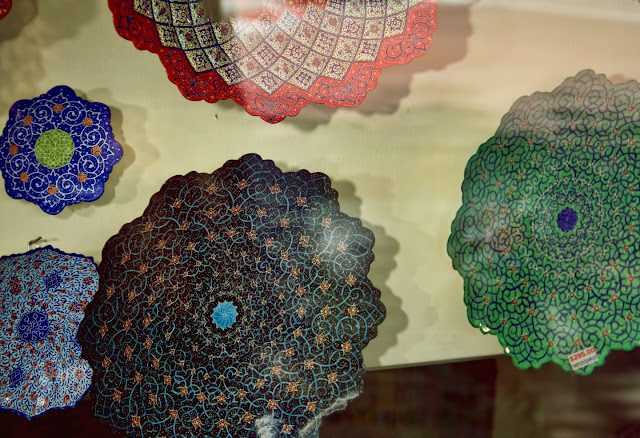 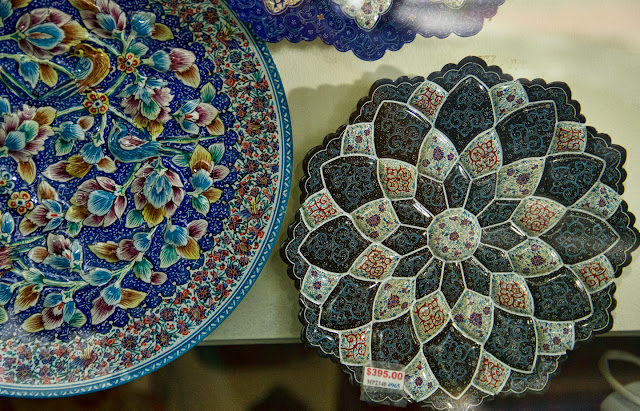 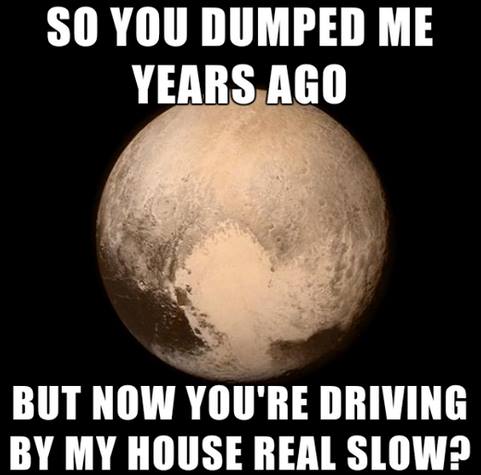 There will be better pictures of the former planet in the days ahead, but this made me laugh. (h/t Balloon Juice)

Back in New York, where the sky is like a wet towel and my body clock stubbornly remains set three hours into the future.
Posted by Kathleen at 8:52 AM No comments:

Labels: astronomy, made me laugh 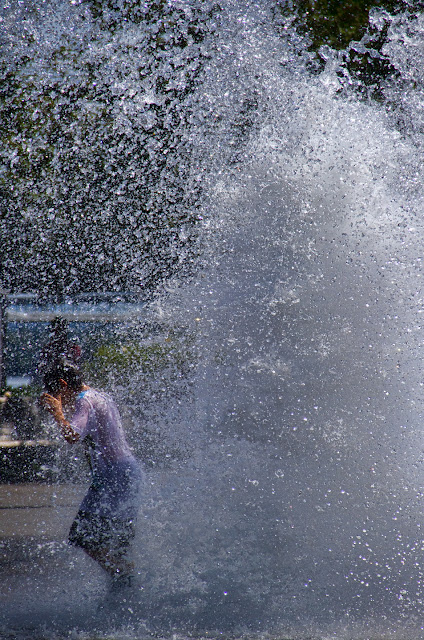 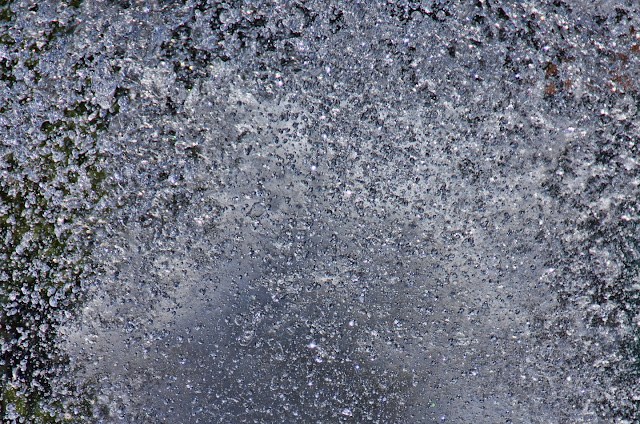 More pictures from the fountain. I used a really fast shutter speed to catch as many individual drops of water as I could. I love the way they shimmer in the light. 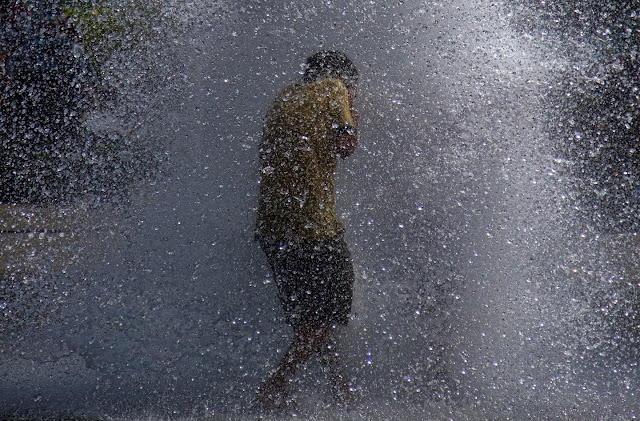 During the afternoon break, I took a walk along the river. There were almost as many children running through the Salmon Street fountain as there were last time I was there, although it was typical warm but breezy Portland weather and not the smothering heat and humidity we had last year. It reminded me of warm days in San Francisco, growing up, when on any of the rare days when the thermometer edged above 70 degrees we'd beg to put on our bathing suits and run through the sprinkler until our fingers pruned and our teeth were chattering. 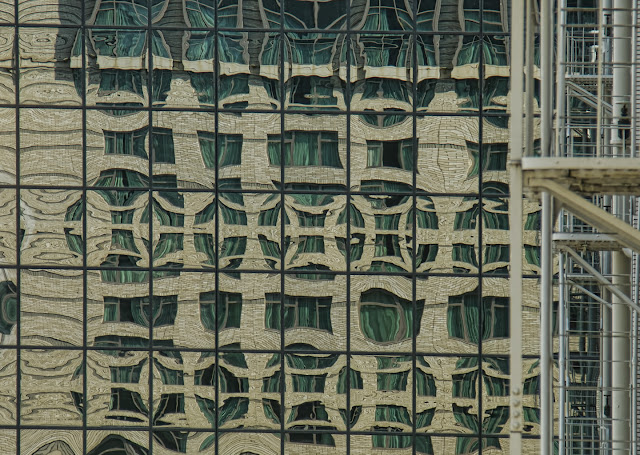 Some very cool reflections in downtown Portland.
Posted by Kathleen at 8:00 PM No comments: 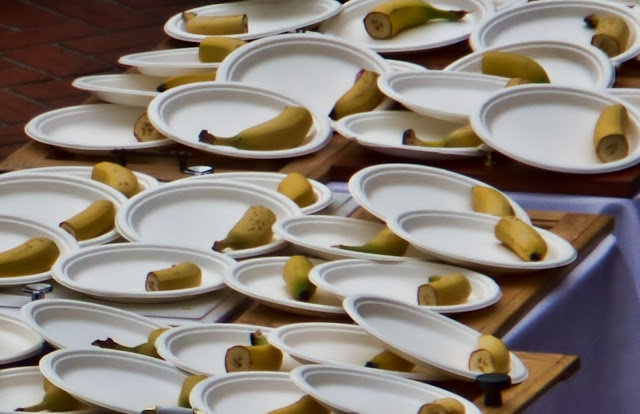 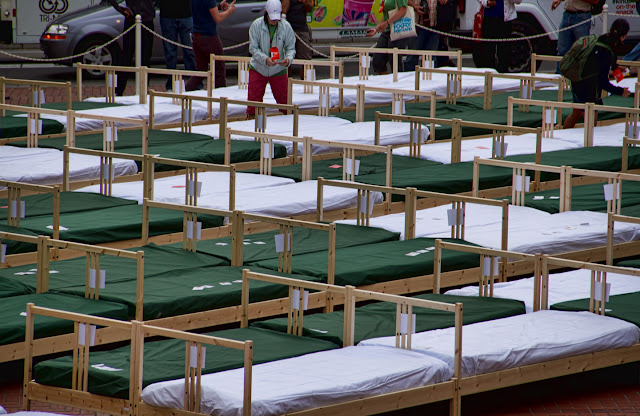 I was a caterer in a former life, so I have some idea of the enormous amount of work involved in pulling an event like this off. Just plating the food takes time and many willing hands when you have to do it 600 times. Then the plates have to be actually delivered to the tables -- er, beds.

I never worked an event where the tables and chairs had to be built first, though. These beds came from Ikea, so there was a certain amount of assembling involved. Kudos to the team behind this -- we got to just sit on the beds and eat and talk and laugh. They made it possible. 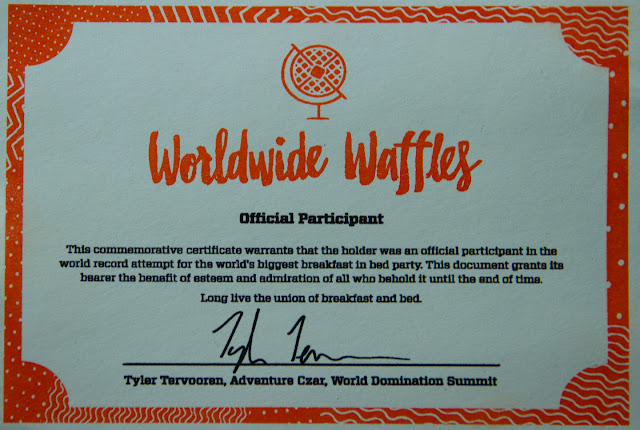 "(E)steem and admiration of all who behold it until the end of time." 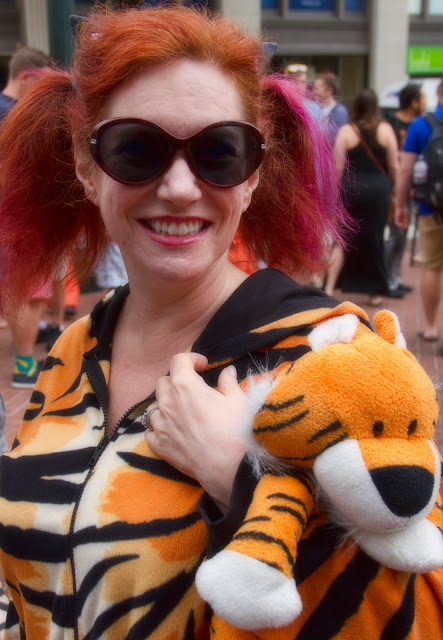 I'm not in the habit of going to bed with strangers. And definitely not in public.

But this morning I found myself in bed with three people I'd just met, in the middle of Pioneer Square in Portland. Not that anyone noticed -- ours was just one of 168 beds full of pajama-clad new acquaintances, gathered to set a world record for the biggest breakfast in bed party.

It was the kickoff for the 2015 World Domination Summit. Like everything else at WDS, it was organized down to the smallest detail. It was a ridiculous amount of fun. And since the beds and mattresses were donated to charity afterwards, it had an element of community service as well.

As for the world record, yes, that's an actual thing. And yes, we smashed the existing record of 388 people with a few hundred to spare (take that, Shanghai!) I know that I always assumed that if I were going to be setting world records, it would probably be something in the performing arts, or possibly track and field. (Major joke here, for anyone who actually knows me.) But breakfast in bed is an area where I have extensive experience, although unfortunately I usually have to make it before I can eat it, and I can honestly say that I performed my record-setting duties with aplomb.

We all had to start eating at the same moment, and then continue to eat the yummy veggie burrito and yogurt parfait for five additional minutes. While remaining on the bed. It was tricky, but all the training paid off, and I'm proud to say I did it. We did it. 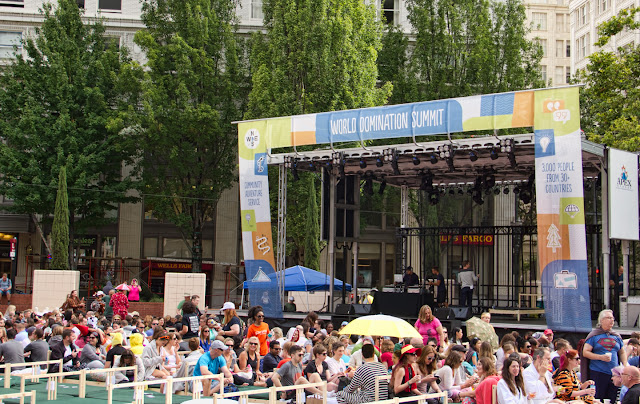 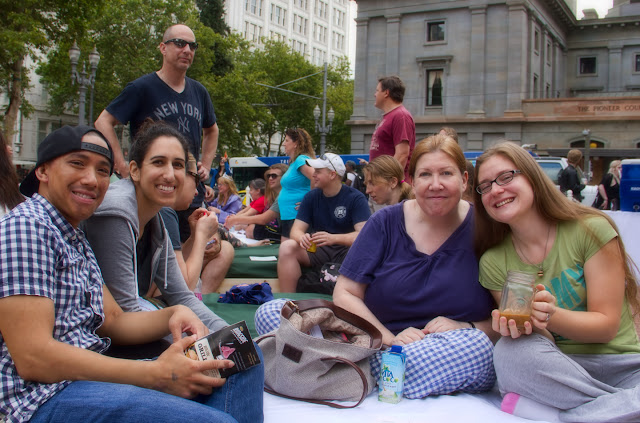 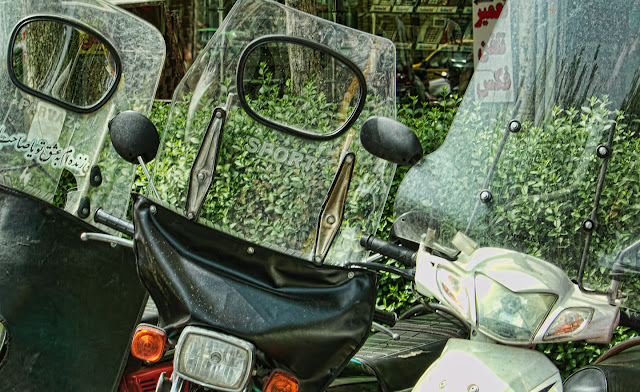 A row of motorcycles on a Tehran street. I love the way they look like giant planters with the greenery behind them. 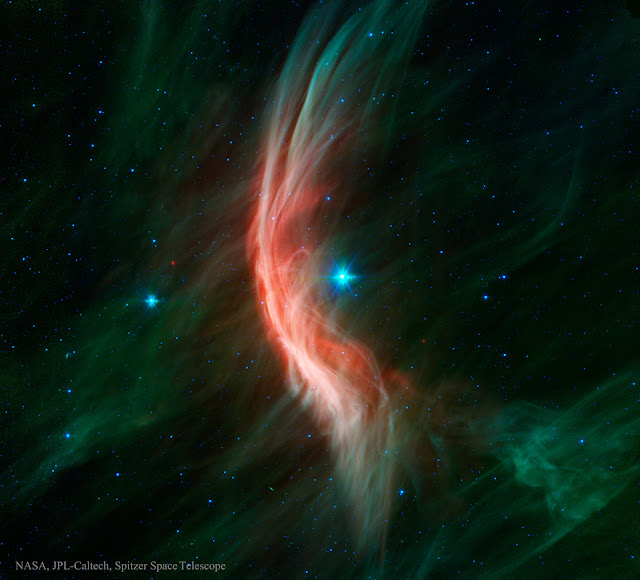 This is an infrared, false color image that lets you see the shock wave created by the bright blue star in the middle, Zeta Oph. The star is moving at 24 kilometers per second, pushing the interstellar gases in a wave in front of it. It's probably an orphan, originally part of a binary star system. When its companion exploded as a supernova, Zeta Oph was flung out of the system, and it's still flying. 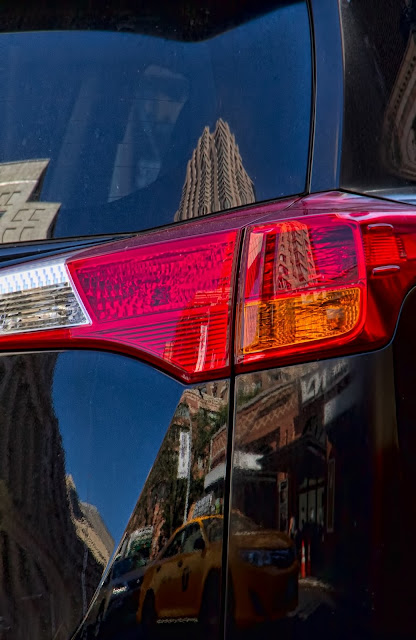 A happy Fourth of July to all -- having this be a three day weekend with Friday off instead of Monday has seriously skewed my sense of time. But it is Saturday.