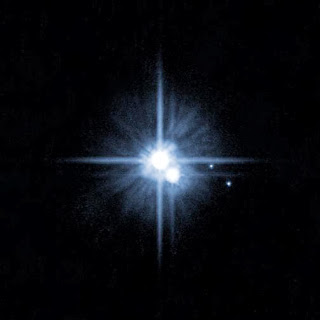 And so we come to Pluto.

With the discovery of Eris in 2005, an object larger than Pluto and three times farther from the sun, astronomers realized that there were probably many more similar objects in the suburbs and exurbs of the solar system waiting to be discovered. And so poor Pluto was basically disinherited, like that weird relative that only shows up every ten years and is forgotten the rest of the time.

Officially, it's now classified as a dwarf planet, like Eris (at least as far as Earthbound observers are concerned -- objects in space don't know what we choose to name them and don't care what we think about them.) It does have three moons though, which is more than some "real" planets I could mention. (I'm looking at you, Mars.)

But it is impossibly small and far away, and before the Hubbell the only pictures of it in astronomy textbooks showed a small point of dim light that could have been anything. Even the Hubbell can't show us much; this is a shot that shows the former planet and all three of its moons, Charon, Nix and Hydra.
Posted by Kathleen at 6:00 AM