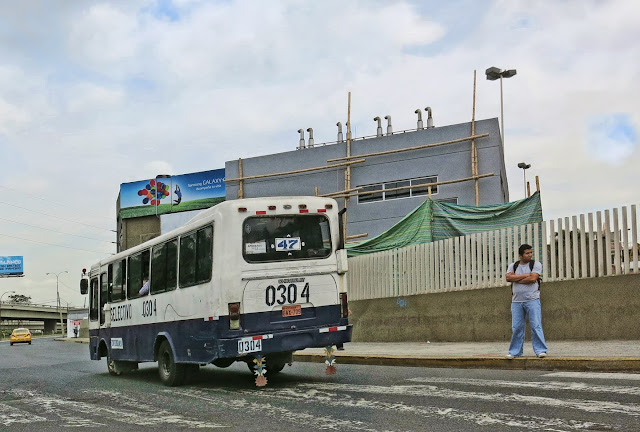 The information packet I got from National Geographic several weeks ago had warned that we needed to be cautious in Guayaquil. Only take the official shuttle to and from from the airport, don't carry valuables or large amounts of cash, don't take a yellow cab unless the hotel calls it for you. I didn't plan to do much sightseeing here, so I didn't think too much about it.

Then I unpacked my camera equipment this morning and realized that I had somehow managed to forget to bring a USB cable. This isn't the first time I thought I'd forgotten it, but it had always turned up, mixed in the pile of extra memory cards I've stuffed into a side pocket, or tossed into my suitcase with extra socks and underwear.

Not this time. Somehow in the packing and unpacking of various lenses and chargers and batteries, it got unpacked for good.

So I ended up seeing a small slice of Guayaquil after all, and getting a much better sense of a security situation that the travel guides only hinted at. When I asked about camera stores at the front desk, the concierge told me there was a Radio Shack in the nearby Mall del Sol, and I could probably get anything I needed there.

I said that was wonderful. How could I get to the mall? I assumed it was close enough to walk.

Oh no no, Señora! He would call a cab for me. Did I want to go immediately? Of course, come with him.

He escorted me outside, where several policia in fatigues with very large guns were overseeing the taxi line. After a quick discussion with one of the drivers, he told me it would cost ten dollars, and the driver would escort me to the Radio Shack and back.

And that's exactly what happened. The mall was less than a ten minute drive away. When we arrived, the driver, who spoke no English, gestured for me to follow him down a pathway and around a corner to the mall entrance. There were three guards with rifles slung over their shoulders, wearing uniforms that said Israeli Security, guarding the door. And inside, a mall that could have been anywhere, with multiple levels of storefronts, a small play area for the kids, soft tinkly music, and almost no people.

The Radio Shack was just across the small courtyard, and the driver came in and stood next to me while I bought a cable. Then he walked me back to the taxi and drove back to the hotel.

I haven't felt so guarded since I was on the walking safari in Zambia with Gift and his rifle. I wanted to sneak a picture of the guards at the mall entrance but they were watching me too closely, so a couple of street scenes from the highway to the mall is the best I could get.