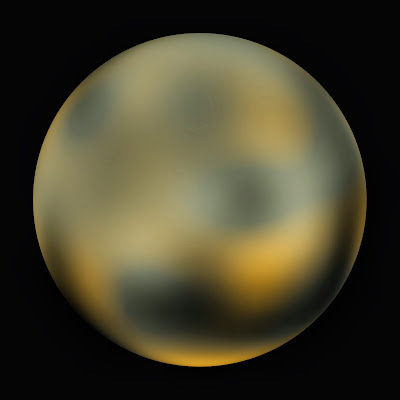 This is one last look at Pluto, an enhanced image from the Hubbell, released in 2010, but actually a composite of 384 pictures taken in 2002 and 2003 that represent a "best guess" of what the planet's colors actually are.

This picture hardly resembles a planet at all -- it looks like what you might see looking through an unfocused telescope. The complete lack of detail is maddening and tantalizing at the same time: orange, gray, and black shadows that could be anything or nothing. What intrigued astronomers was the great shift in the colors over time, indicating that far away and dark as it is, Pluto still manages to have seasons.

But it's all speculation for now, at least until the New Horizons spacecraft arrives in 2015, and we finally get our first real look at the former planet. Once it was the outlier, the afterthought in a organized system of nine planets that every schoolchild could memorize; now it's the first stop on the way to the Kuiper belt and beyond, in a solar system that's much larger and stranger than we realized.

Beautiful, eerie images all. This new one especially.