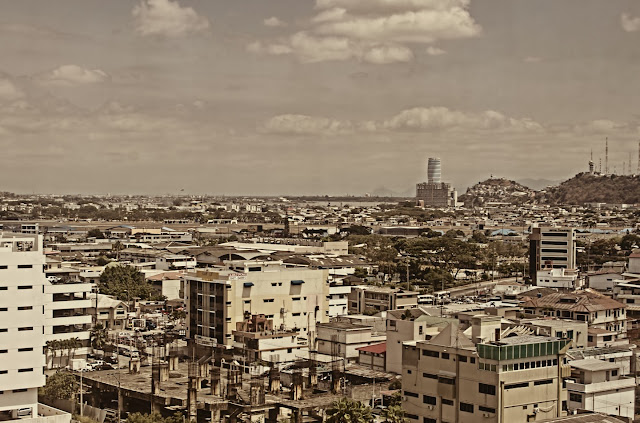 This is the view from my hotel window -- the washed out brownish tone is on purpose, as my arrival late last night had a little of the flavor of a scene in a book by some Graham Greene wannabe, this one featuring a grumpy gringa with an unhappy stomach who had ample time during the very long wait in immigration to imagine that she had every one of the symptoms of cholera so helpfully detailed on the large posters everywhere.

It is not easy to get into Ecuador. After immigration, and recovering my luggage, there was another long line to go through customs, followed by yet another line to have my luggage x-rayed. The woman standing in front of me told me that it's not unusual for the whole process to take three or four hours, but then a couple who looked like my idea of telenovela stars arrived -- she was blond, wearing heels and a black cocktail dress with a lacy hem, and had only a large gold colored tote and a garment bag for luggage; he was expensively suited, handsome, sullen -- and another scanner was opened up in their honor. There was one more checkpoint, where I had to produce and surrender my boarding pass and luggage tags, and I was officially admitted to the country.

It was late and I didn't see much in the short ride from the airport, so this was my first glimpse of the city this morning. And as I don't plan to do much if any sightseeing today -- a nap, maybe a swim, is more what I'm thinking -- this may be all I see.