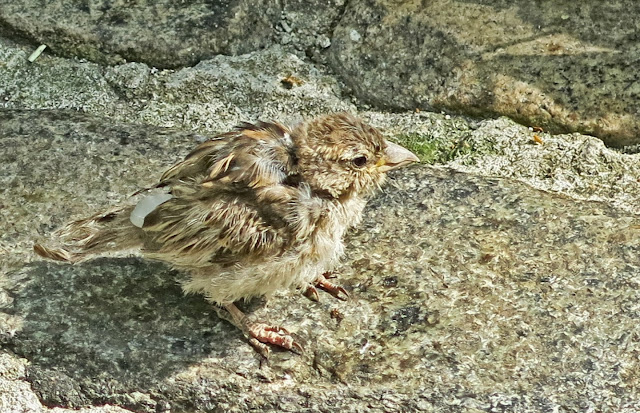 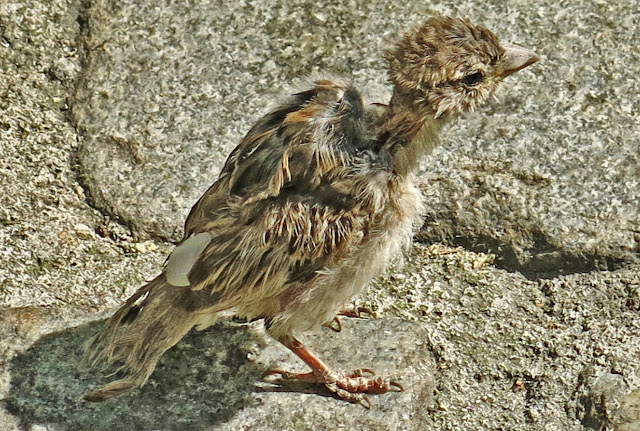 Here's something I'd never seen before: a fledgling house sparrow.

I bought a new television yesterday, an experience so exhausting that I had to sit in Bryant Park with a Jamba Juice for quite a while to recover. I'm hardly a Luddite -- I make my living in technology -- but I hate to get rid of perfectly good devices and appliances just because something better is available. The only upgrades I crave are the marginally more roomy seats in the front section of a plane, and I'm never going to stand in line for the latest anything.

And there is absolutely nothing wrong with the television I have, except that it is almost twenty years old and is starting to look embarrassingly old-fashioned, even to me. And it takes up a lot of room, which, since I live in Manhattan, I don't have nearly enough of. So it was definitely time to get me one of those newfangled flatscreen thingies that hang on your wall.

Which is how I came to be in Bryant Park, a small oasis behind the library on 42nd Street that could have been transplanted from Paris. There are tall trees, a carousel, lots of chairs and tables, and flocks of house sparrows looking for handouts. And this youngster, hopping around by herself (I assume it's a she; the coloring is definitely female) although she clearly hasn't been out of the nest very long. In the picture on top, you can tell she's a house sparrow, a little damp, unusually fluffy, but definitely a house sparrow. Then she stretched out that skinny baby bird neck, and suddenly I wanted to ask her if her parents knew she was out by herself.

Unfortunately I only had my little point and shoot, but I think the Awwww factor comes through even in low resolution.

so adorable. I love how you capture birds' SMILES.