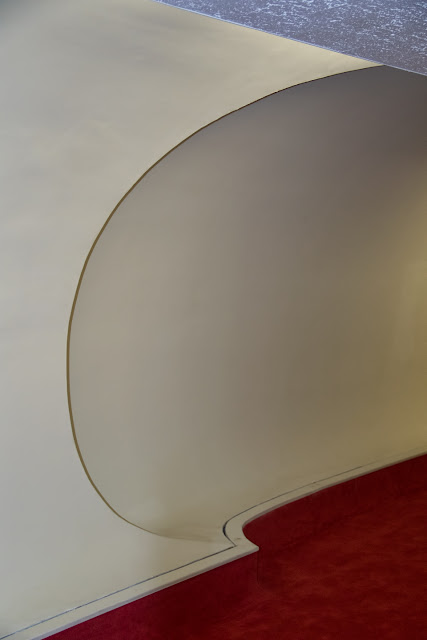 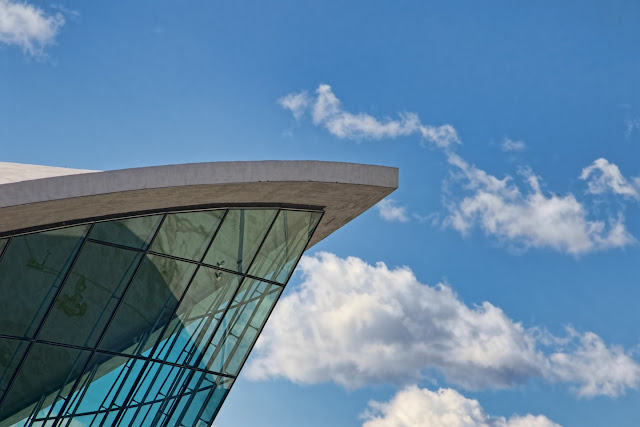 Two more pictures of the TWA terminal at JFK: an exterior shot where it looks ready for takeoff, and a detail of the perfect curves of the jetway.
Posted by Kathleen at 10:08 PM No comments: 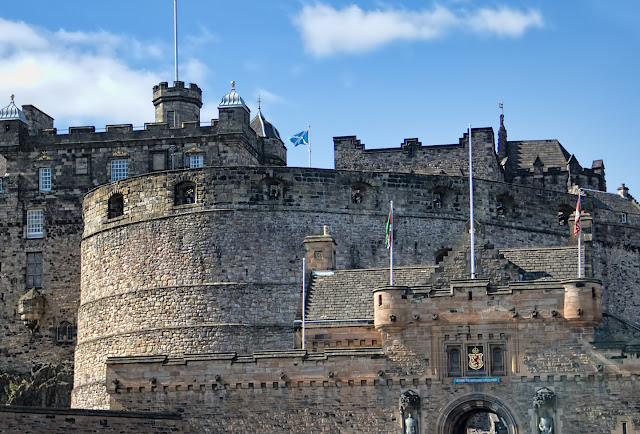 It figures that a country with a talent for engineering would build excellent castles, and the Scots do not disappoint. Edinburgh Castle looks even fiercer from the front than it does when you're staring up at it from the bottom of a sheer wall of rock.
Posted by Kathleen at 9:28 PM No comments: 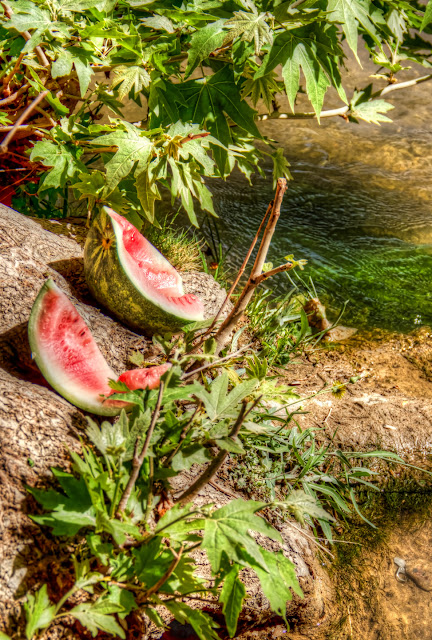 Watermelon rinds left out for the birds, after someone's picnic in the Shazdeh Gardens.

Below, a  Qajar-era painting from the Niyavaran Palace complex in Tehran. 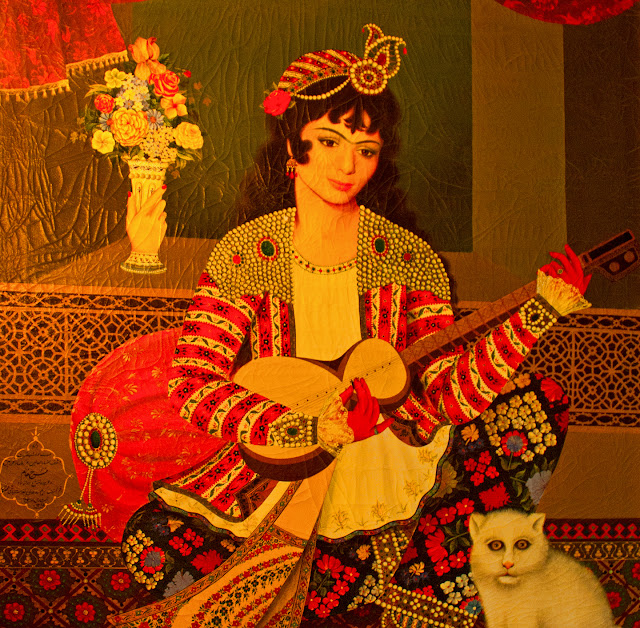 Posted by Kathleen at 6:10 PM No comments: 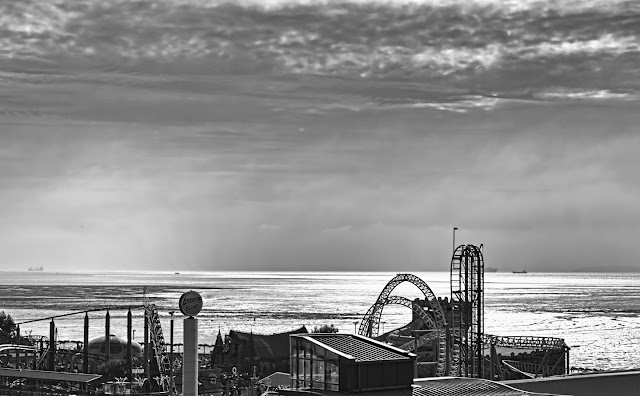 The modern version of the English seaside resort, in the harsh light of early morning. I like the contrast between the sharp detail of the amusement park in the foreground and the misty ships in the distance, which turned out to be more obvious in black and white.

This was from an overlook just down the road from the B&B where I stayed  -- the famous pier is just out of frame to the left.
Posted by Kathleen at 7:41 AM No comments: 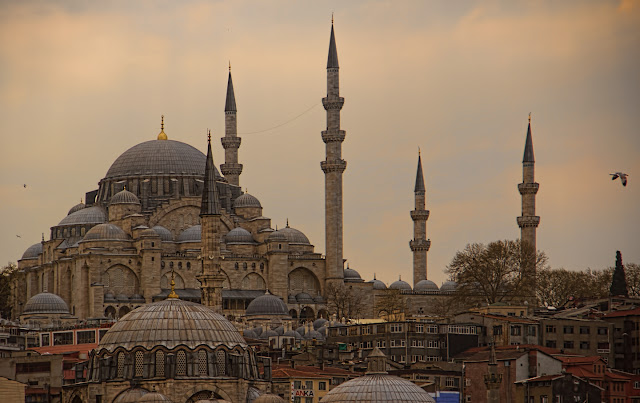 The New Mosque at twilight.

To call this a wealth of detail is such an understatement, but I love the way the fading light softens and smooths it into a dream.

My goodness how the time has flewn! 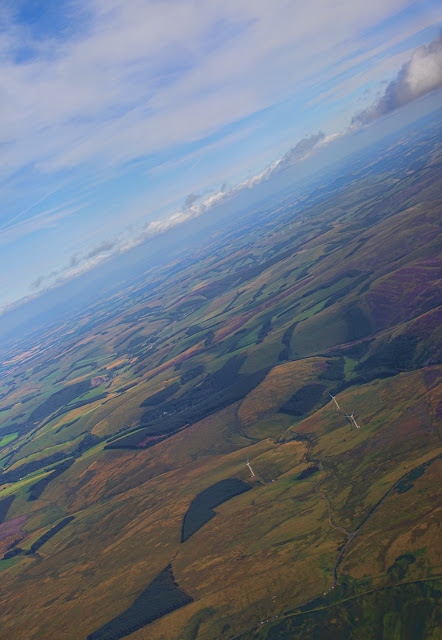 If Dr Seuss doesn't know, I certainly don't. As the last of the year trickles away, I'm going to post a few pictures that I never got around to using, and start 2016 fresh, with an empty Blog Ready folder.

Speaking of things having flewn, here's a landscape somewhere between London and Edinburgh in September. At the time I was wondering if the frequent purply-brown patches like the ones on the right were heather and if I'd really see whole mountainsides of it. (Spoiler alert: they were and I did.)
Posted by Kathleen at 7:17 AM No comments: 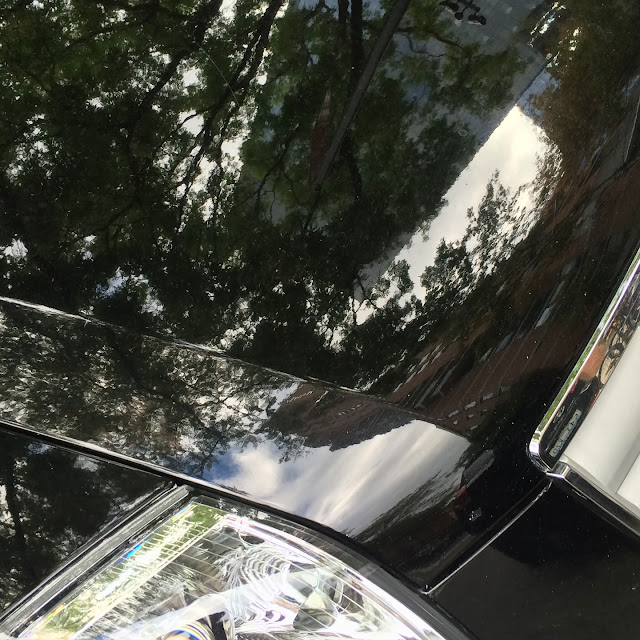 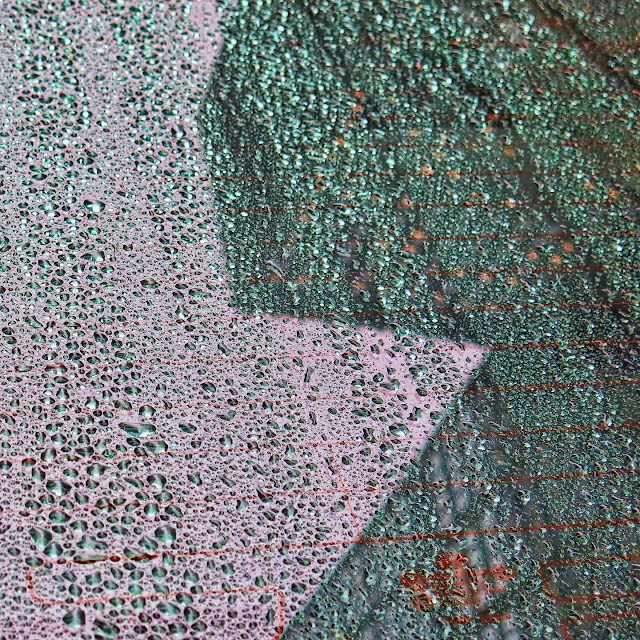 I'm not a big fan of Instagram. Most people seem to use it as a vehicle for inflicting more selfies and food pictures on a world that isn't suffering from a shortage of either, and I won't use my phone to take a picture if I have a camera available.

There are some photographers who are creating interesting work within those limitations, of course, but it's mostly not the kind of picture I want to take. With one exception -- I've become fascinated by the square photo, especially for photographing cars and reflections. Or cars and reflections, as in these two pictures. The smaller scope seems to make the shapes more abstract somehow and I love the effect.

Posted by Kathleen at 7:59 PM No comments: 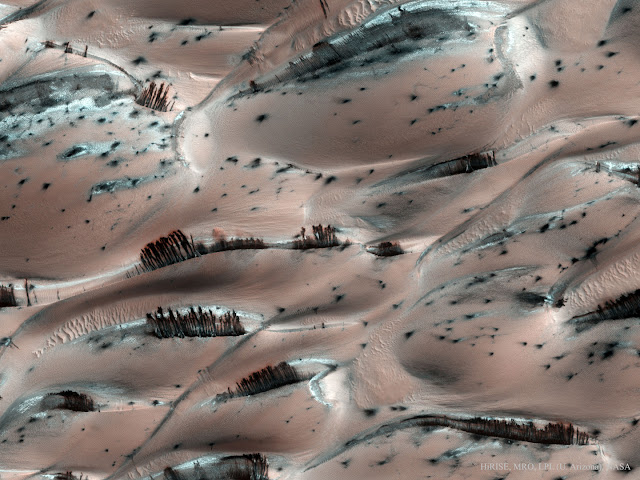 Christmas on Mars, anyone?

This image, of an area close to the (how seasonally appropriate) North Pole, was taken by the Mars Reconnaissance Orbiter in 2008. Sadly, those aren't Christmas trees -- what I could swear are stands of barely rooted tundra-like forest are just streaks of darker dirt on those astonishing pink sand dunes.

If there's a sequel to The Martian, may I respectfully request that it include at least one scene of astronauts skiing down these pink hills?

Posted by Kathleen at 8:03 PM No comments: 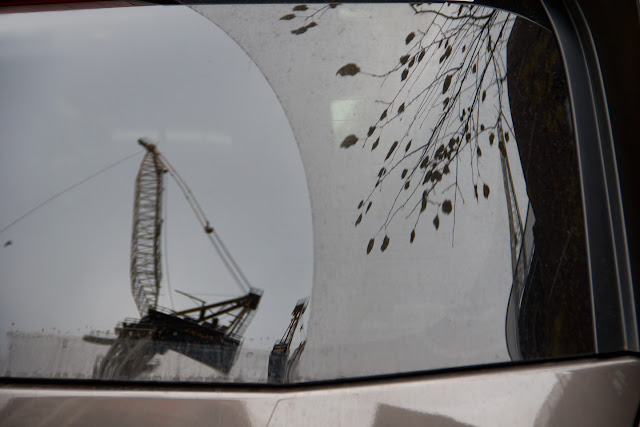 I like the juxtaposition of the crane and the tree in this car window on West 57th Street. The moodiness suits the season, which somehow doesn't feel so festive because it's still too damn warm. It's gloomy in the morning, gloomy in the afternoon, and the sun sets at 4:30, so the temperatures in the 50's and even the 60's every day just feel wrong.

(I'll remind myself of this in February, when I'll probably be complaining that the cold is never going to end....)
Posted by Kathleen at 6:00 AM No comments: 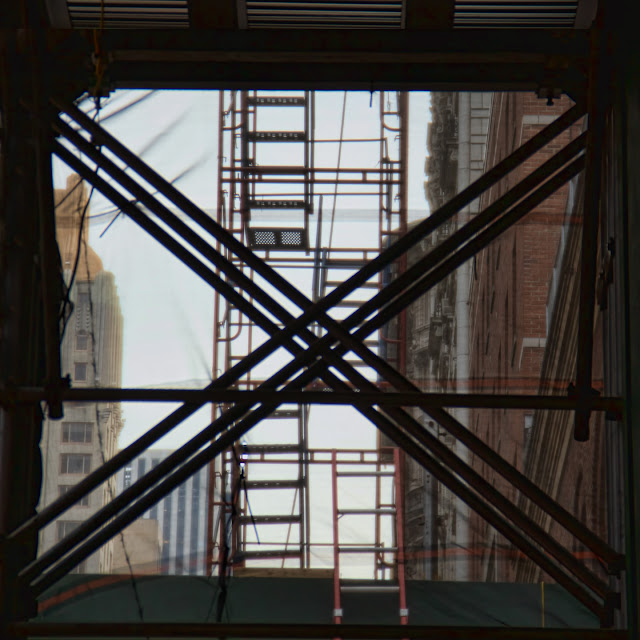 Scaffolding on West 57th Street.
Posted by Kathleen at 6:00 AM No comments: 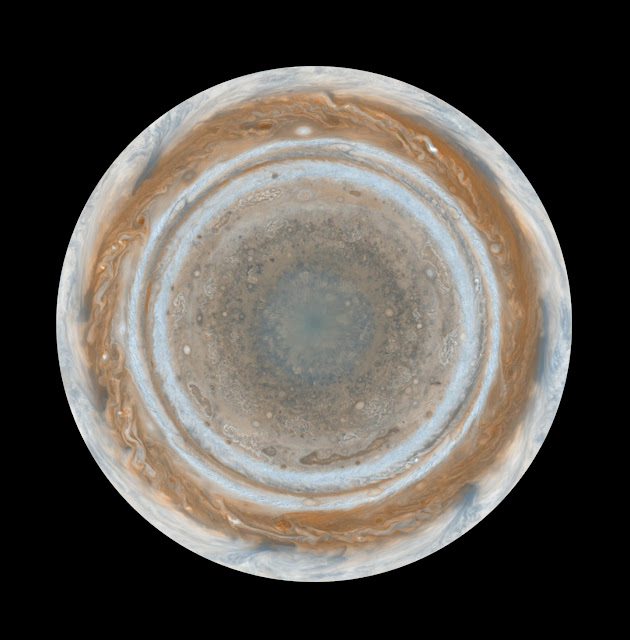 It's all a matter of perspective.

Even a face as famous as Jupiter's can be unrecognizable when looked at from a different angle -- in this case, hovering over the planet's north pole and looking down at the northern hemisphere. This is a composite put together from images taken by Cassini in 2000, and even if Jupiter wouldn't look exactly like this from above (I know, I know, there's really no above in space, but shut up) it's surprising to me how un-planetlike it suddenly looks. Turn those familiar bands of color around the equator into these concentric circles and you go from majesty and immensity to what appears to be a large ceramic platter produced by a talented if not terribly original artist.

Image credit: NASA/JPL/Space Science Institute
Posted by Kathleen at 6:00 AM No comments: 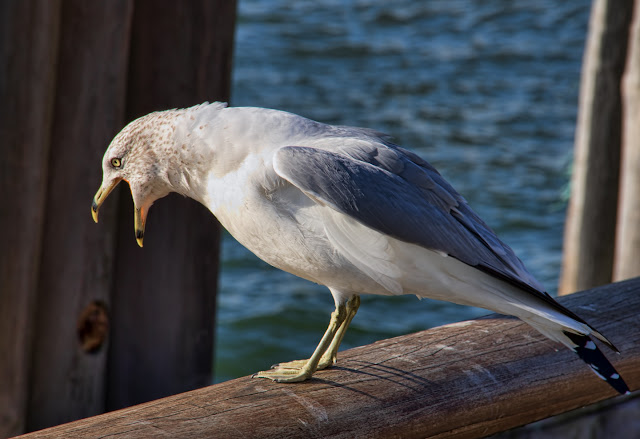 Like so many of us these days, this gull appears to be saying, Are you *%$*&^ kidding me? 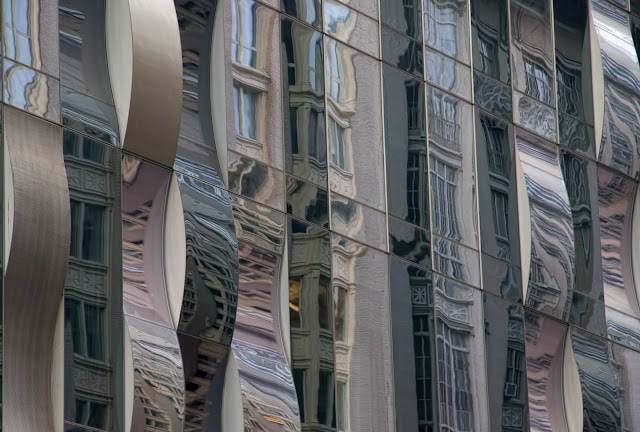 Undulations of steel reflect the more traditional buildings across 57th Street. This is One57, one of a new series of tall super-thin luxury condo buildings that will be casting shadows half a mile long into Central Park during the already dark months of winter when they lie almost directly between the low winter sun and the park. That the city belongs more and more to the billionaires isn't news, but that doesn't make it any less depressing.

On a happier note, I went to brunch with a group of World Domination Summit veterans, and then to a Christmas concert at the Norwegian Seamen's Church, where a friend of a friend was singing. I hadn't realized that a lot of the songs and almost all of the introductions would be in Norwegian, but it's similar enough to Swedish that I could catch a phrase here and there (easier since it was a Christmas concert and so heaven and angels and stars and trees and Jule came up a lot.) And after polishing off a healthy serving of the very good glogg offered at the door, I was standing and singing in Norwegian along with everyone else.

(This may be about sitting by the window and looking for the Christmas star, which is big and clear. Or not.) 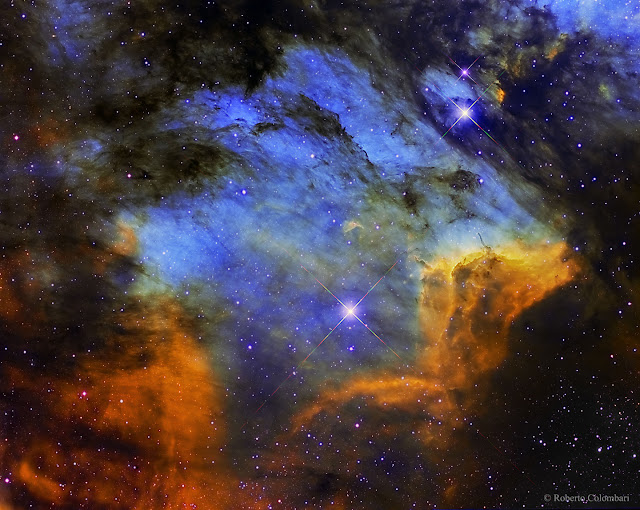 This beauty is called the Pelican Nebula, a hotbed (so to speak) of new star formation.

I don't really see a pelican here, but I do see brilliant light and pattern that makes me wish I were a painter so I could try to copy those wispy tendrils of color. 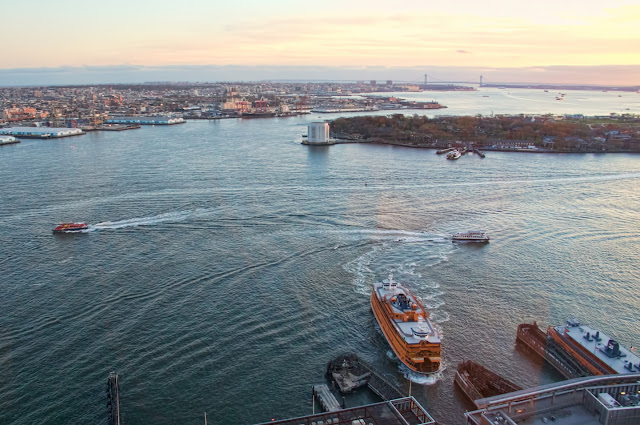 New York harbor at sunset. That's the Staten Island ferry (Staten Island itself is at the top right of the picture, on the western side of the Verrazano Bridge) pulling in to carry weary commuters home.
Posted by Kathleen at 6:00 AM No comments: 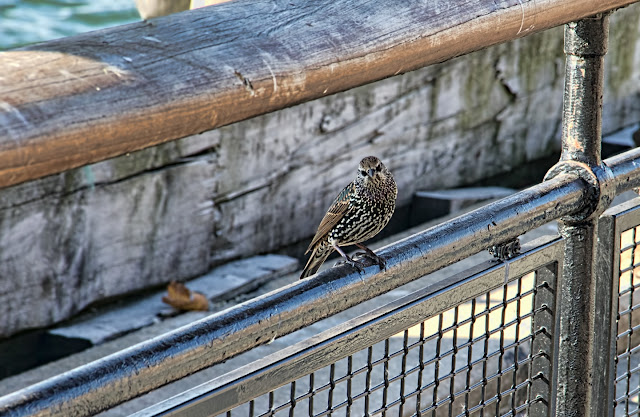 In the middle of flocks of bigger, pushier gulls, a lone starling stakes out a position in Battery Park.

It's not a very detailed shot of the bird, but in this case the surroundings make the picture.
Posted by Kathleen at 4:54 PM No comments: 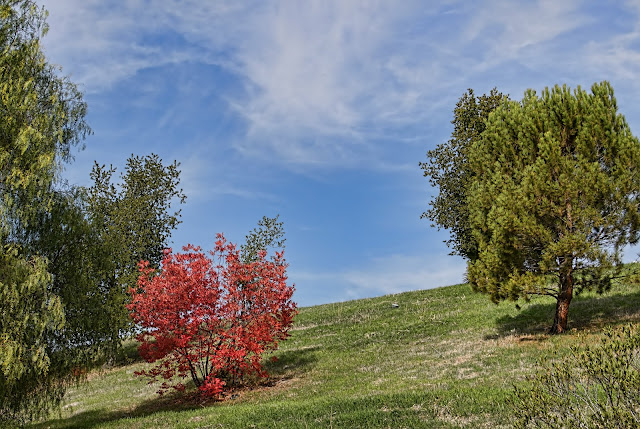 I was offline for the holiday last week, but I did want to share this wonderful quote from Oliver Sacks:

My predominant feeling is one of gratitude.
I have loved and been loved.
I have been given much and I have given something in return.
Above all, I have been a sentient being, a thinking animal on this beautiful planet, and that in itself has been an enormous privilege and pleasure.

A belated happy Thanksgiving to everyone, and here's one more piece of wisdom I was happy to discover still holds true: Baste the turkey with butter. You can never go wrong with butter.
Posted by Kathleen at 10:15 PM No comments: 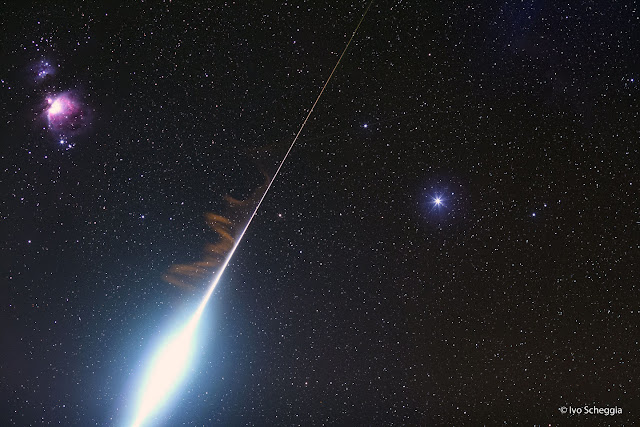 That fireball slicing through this photograph is a meteor. The photographer was trying to capture the Orion nebula, seen in the upper left, and the long exposure happened to capture this meteor as well. The orangey zigzag is what's known as a persistent train -- atoms in the Earth's atmosphere reacting to having electrons knocked away by the meteor. It's shaped that way because the wind actually blew it around during the long exposure. (You can see a gif of it here.)

The large star on the right is Rigel, the blue giant on the hunter's knee.

Image Credit and Copyright: Ivo Scheggia
Posted by Kathleen at 7:10 PM No comments: