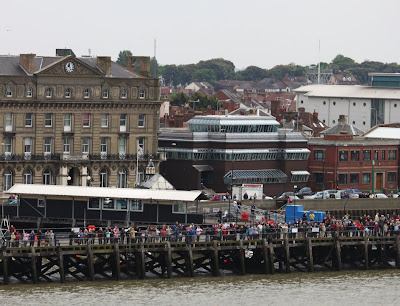 I didn't see much of Harwich -- one minute we were driving through the green fields of East Anglia, and the next we were at the ship, without anything resembling a town in between -- but apparently there isn't a lot to do in the evenings. Every time a cruise ship leaves port, people gather on the pier to wave goodbye, and the ship's horn blows three times to acknowledge them. It's a little odd, but as customs go I much preferred it to the dozen bagpipe players on the dock.

Posted by Kathleen at 6:45 PM No comments:

I must go down to the seas again 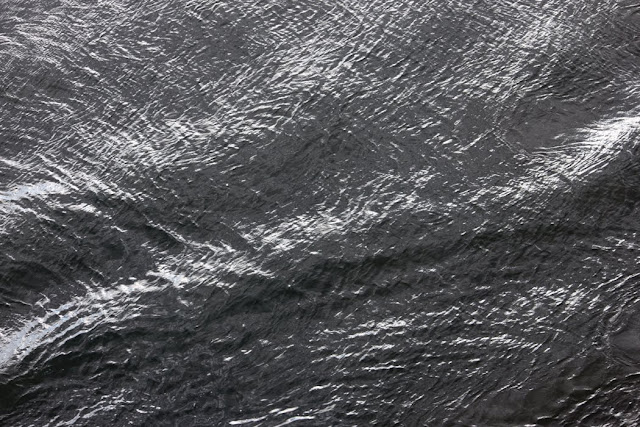 I'm off on another twelve-day cruise, this time through the Baltic, though it's only been a little over six months since the last one. I meant to do this much later in the year, but plans got shifted around, and when I realized that going now meant I'd be in St. Petersburg on my birthday, it was an easy decision.

And I couldn't have known how much I would need a vacation. Now. RIGHT NOW. Not in September. Now.

We're sailing out of Harwich, on the east coast of England, about two and a half hours from London. Tony, the driver of the van that picked me up at Heathrow (http://www.silver-fleet.co.uk/content.aspx?id=1 - highly recommended) had driven a group from Harwich back to the airport early that morning, and told us that on the previous sailing it had rained ten of the twelve days, and that the North Sea especially had been really rough.

Honestly I don't care if there's a hurricane. Just so there's a bed and a bar and a dining room and no BlackBerry service. The North Sea, picture above, is fairly smooth at the moment, but does not look especially friendly. You might think that's a black and white photo, but it's not. We're a long way from the Mediterranean.

Posted by Kathleen at 4:38 PM No comments: 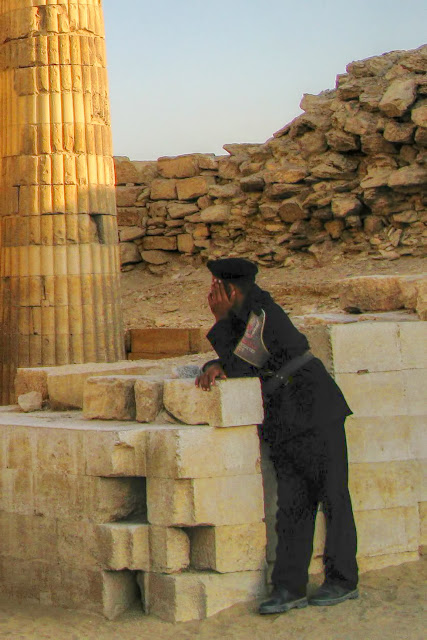 Here's a flashback to Egypt, one of the guards at Saqqara. I just love the slouch (well, it was the end of the day), how interested he isn't in the endless stream of tourists walking past him.

I wonder how long he's been doing it, if he's ever impressed or amazed at the 4000 year old monuments around him. Or maybe if you're Egyptian, old monuments have been part of the background all of your life and they're nothing to be impressed by. I grew up in San Francisco where, except for Mission Dolores, there wasn't much that was more than a hundred years old, and I remember on my first trip to London as an adult just being flabbergasted by how old everything was. Hundreds of years! Hundreds! Then I went to Rome. And China. And Egypt. And hundreds of years isn't so very old after all.
Posted by Kathleen at 7:22 AM No comments: 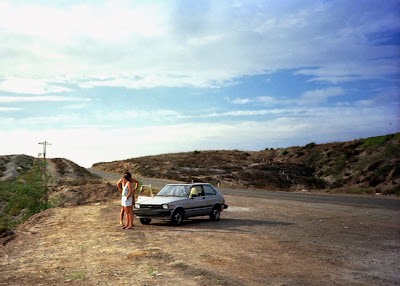 I was in LA for business, staying with friends in Costa Mesa for the weekend. It was unbearably hot, and we were bored, so we decided to get in a car with no air conditioning and drive down the coast to Ensenada to eat tacos.

Not surprisingly, it was even hotter in Mexico than it was in Costa Mesa. Here we've stopped by the side of the road to try and catch a breeze off the ocean, which is to the left. And which, as I recall, had few breezes to offer.
Posted by Kathleen at 9:45 AM No comments:

Where do you want to go today?

As a slogan, it's not exactly up there with "Where's the beef?" so you may not remember that this was Microsoft's first big ad campaign.

Software is not the least interesting thing I have to think about in my travels -- especially professional travels -- and I somehow made the invitee list for the official launch of Office and Sharepoint 2010 at the Saturday Night Live studio here in New York yesterday. The video is available online, and I think it's worth viewing primarily for the many attractive shots of the back of my head. 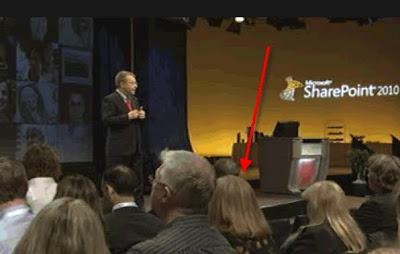 Posted by Kathleen at 2:56 PM No comments: 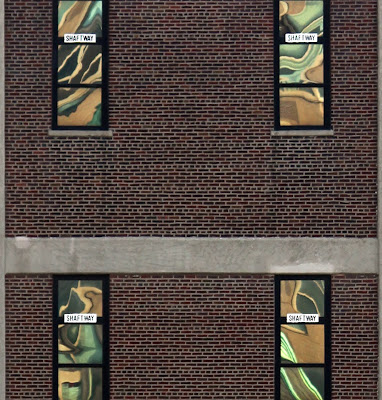 A building near the Lincoln Tunnel, the most mundane brick and concrete imaginable, and then those window reflections that remind me of the cheap special effects meant to represent bad drug trips in old TV movies from the seventies.

Posted by Kathleen at 3:43 PM No comments: