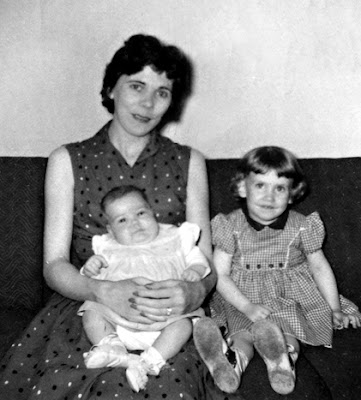 I'm guessing that my sister is about six months old in this picture, which makes it the fall of 1958. We were living in Paris, where my father was stationed with the Marines. I like my mother's dress -- it was not a style she would have worn later -- and I'm struck by how tired she looks, but I find it hard to see much beyond my enormous feet. Maybe I was wearing extra big shoes to grow into, or maybe the angle just exaggerates their size, but those are definitely significant feet. I guess I should consider myself lucky that they only grew to size 9 1/2.

Posted by Kathleen at 9:13 AM No comments: 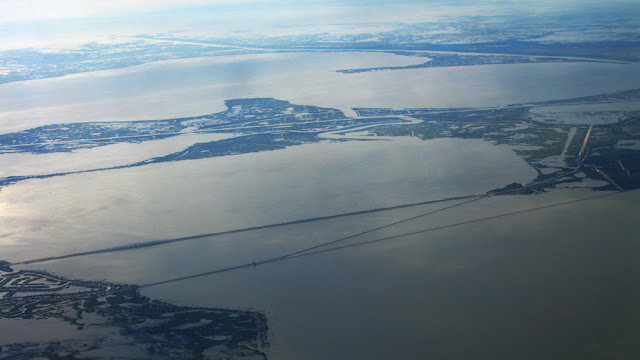 A picture from the plane as I was leaving. You can clearly see that this part of Louisiana is mostly water -- it's not just the river and the lake and the gulf; it's the hundreds of canals linking them, crisscrossing the land and keeping it all in balance. And why a storm surge that left water levels twelve feet higher was such a disaster. 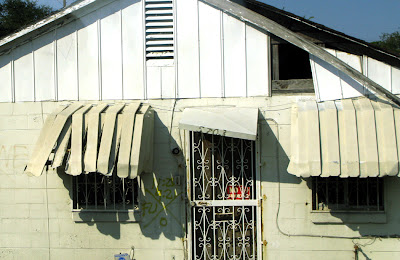 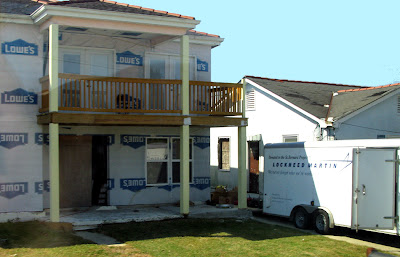 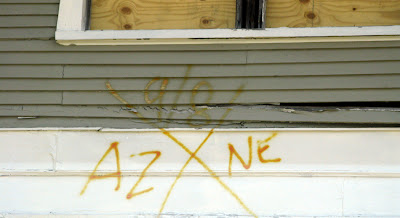 That's what they call these signs, which are still a common sight five years after the hurricane. Rescuers marked houses as they were searched, with the date, the group who'd searched (in this case the Arizona National Guard), and the number of bodies if any. The NE means No Entry -- they weren't able to get inside the house because of the flooding. 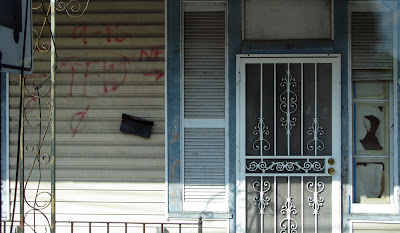 When the levee breaks I'll have no place to stay 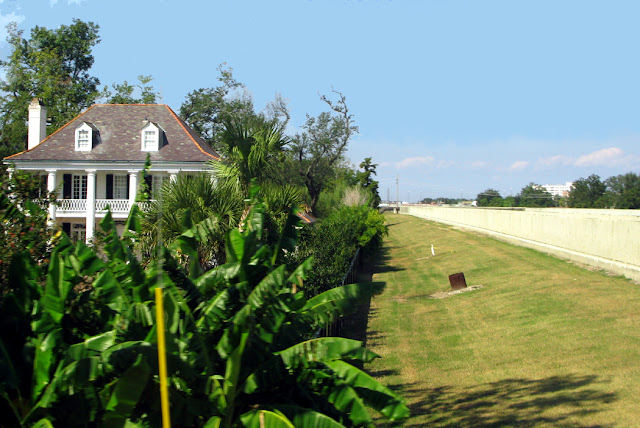 I never really understood why the French Quarter, sitting right on the Mississippi, had no flooding after Katrina, but after driving around seeing the areas that were flooded, it makes more sense. It was the storm surge after the hurricane that was so dangerous -- waters that rose twenty-eight feet very quickly. Some people had literally seconds to get to the attic.

And if this levee hadn't held, the inhabitants of this house wouldn't even have had seconds. If I lived there -- and I couldn't -- I would never get a single night's sleep. 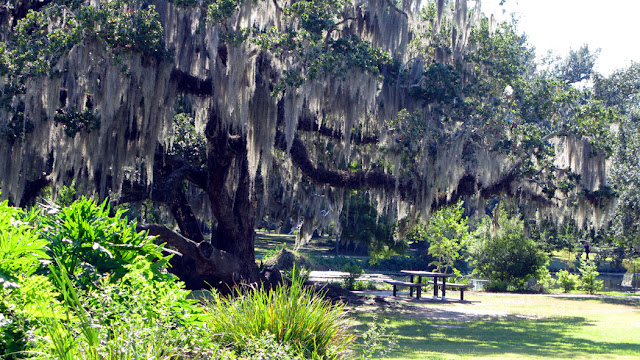 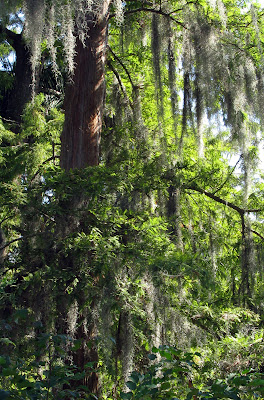 I took a Katrina tour my last day in New Orleans, which was both sad and fascinating. Halfway through, we took a break in this lovely park, which like everything else in the region sustained extensive damage from salt water. It's been relandscaped and replanted, but you'll have to come back in a couple hundred years when the new trees are mature to see it looking the way it used to.

However, it takes more than twelve feet of salt water to bring down these ancient live oaks, planted before the Civil War, which seem to be thriving.
Posted by Kathleen at 12:45 PM No comments: 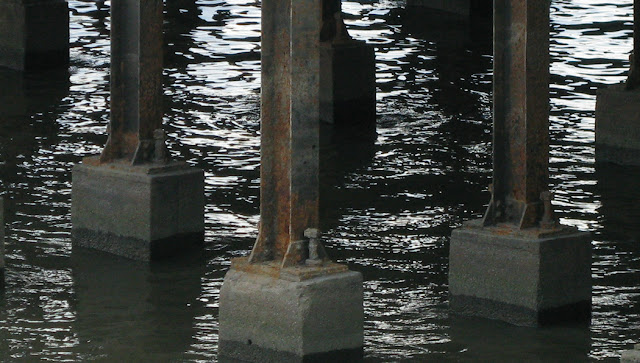 Pilings in the Mississippi. Not an especially New Orleans image, but readers of this blog (both of you) will recognize it as the sort of picture I like to take.

And two more favorites: kids playing hide and seek at the Holocaust Memorial, and morning in the French Quarter. 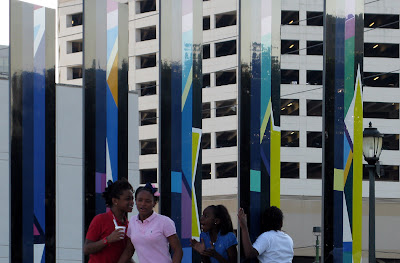 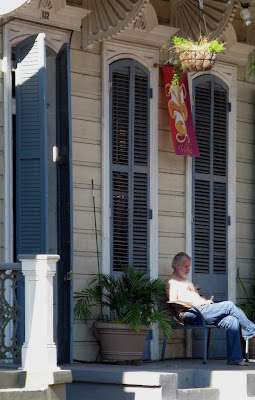 Posted by Kathleen at 8:10 PM No comments: 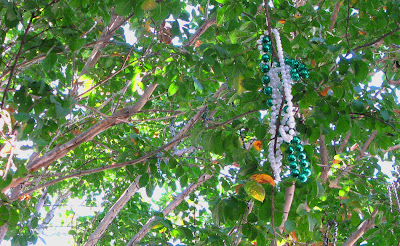 They are still laissezing les bon temps rouler in New Orleans. The streets of the French Quarter are full of tourists carrying neon-colored cocktails, and the wedding guests I saw coming out of the cathedral were wearing masks and feather boas and the groom was clearly not on his first beer.

There's a band on every block, and you never have to go very long without finding an impromptu parade to "When the Saints Come Marchin' In." 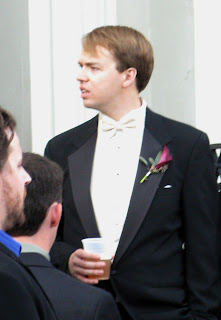 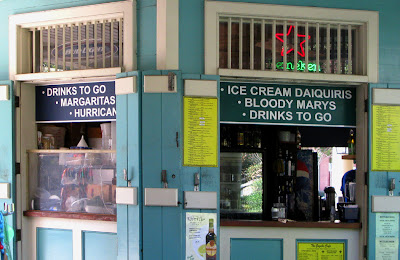 But cross Canal Street and the streets quickly empty out and I sometimes felt as though I'd wandered into one of those apocalyptic movies where the hero is the last remaining inhabitant of the city. Or the planet. Creepy. And more than a little sad. 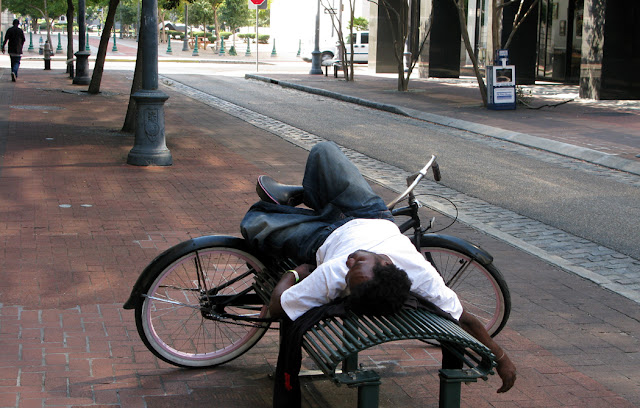 Posted by Kathleen at 7:52 PM No comments: 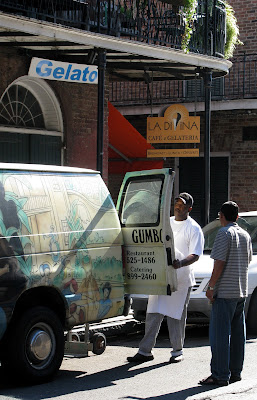 A restaurant delivery in the French Quarter in New Orleans.

We don't usually get Columbus Day off, so I took advantage of the long weekend and went somewhere I hadn't been in a long time. (And which I figured had a greater need of my tourist dollars than anywhere else I could have gone.)

I'll post more photos later in the week.
Posted by Kathleen at 8:00 AM No comments: 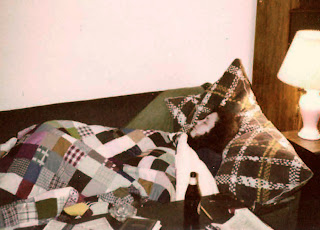 I'm not sure when (or if) normal blogging, such as it was, will resume. 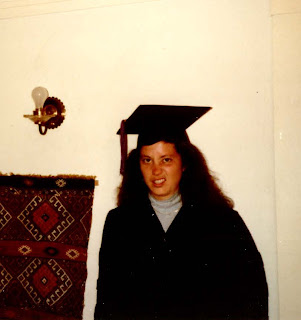 In the meantime, here are a few last pictures: Laurie sleeping through a dinner party in Berkeley, law school graduation in 1980, yawning through a conversation, on the beach in Southhampton in 1984. 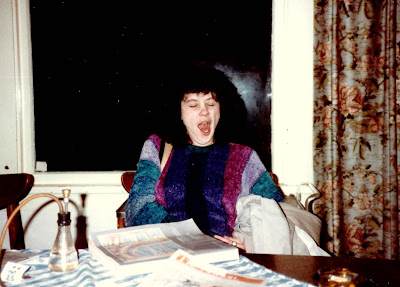 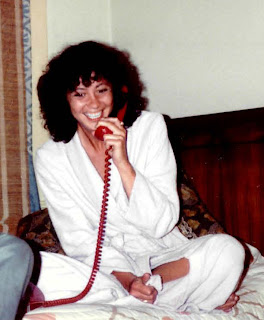 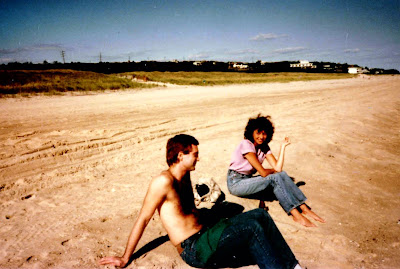 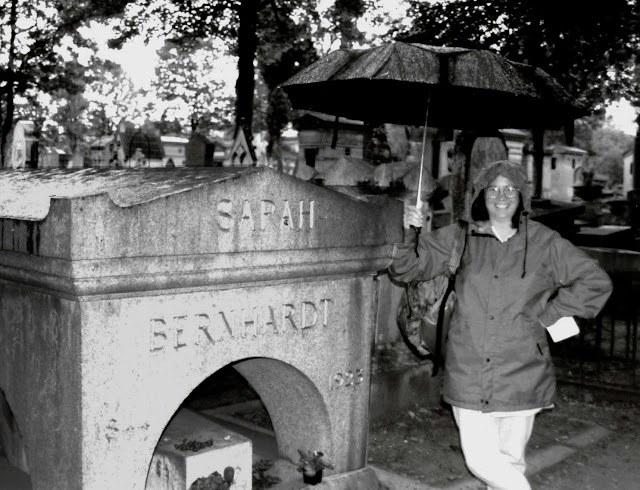 Laurie posing in the rain by the grave of Sarah Bernhardt in June 1995. Sarah Bernhardt had been one of her family nicknames, and I am very confident that Laurie will more than hold her own in any Drama Queen Deathmatches that may be taking place in the afterlife.

Spending a week together in Paris was one of the things we had always talked about and finally did. She'd spent two weeks driving around Bourgogne and the Loire with her boyfriend at the time (whom I now always fondly refer to as the Dickhead), and I was on my way home after a couple of months in Eastern Europe. The three of us dined extravagantly at le Grand Véfour and family-style at Polidor, had cognacs at the Bar Hemingway at the Ritz, rented bicycles and rode around the gardens of Versailles in the rain, took a tacky boat tour on the Seine. 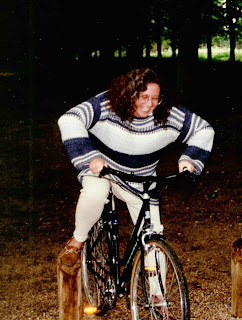 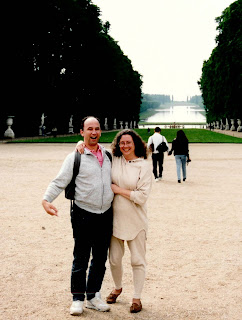 Then the Dickhead went home, and we stayed. We saw too much art, drank too much wine, went to cafes and cemeteries and cathedrals. It was Paris, and it was perfect.
My favorite picture from the trip isn't of any of those things, however. The first night we were both tired from lugging our baggage across the city to a new hotel and we ended up spending the evening in our room, reading. Which is how we had spent hundreds of evenings together, but we found it hilarious that after so many years of planning a Paris trip, we ended up deciding that all in all, we'd rather be reading.
On the back, I wrote Laurie and Kathy do Berkeley San Francisco New York Paris. 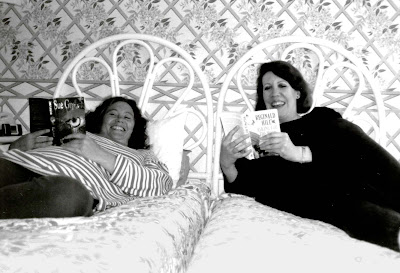 Posted by Kathleen at 3:24 PM No comments: 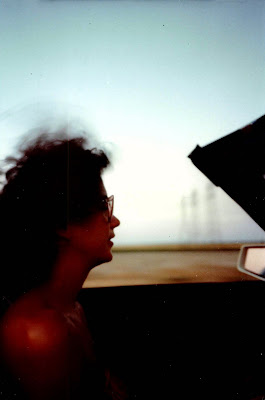 This is one of my favorite pictures of Laurie, half-blurred behind the wheel of a convertible somewhere in central California in 1984.

We were driving from San Francisco to LA for Paul and Elisa's wedding, the only long drive we ever took together. We kept the top down the entire way, blasting the Beatles and Tom Petty and "Girls Just Want to Have Fun."

The convertible was a company car provided by her law firm. She loved how silly and over the top and completely inappropriate it was. It suited her perfectly. 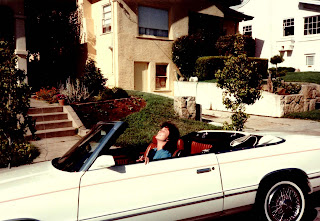