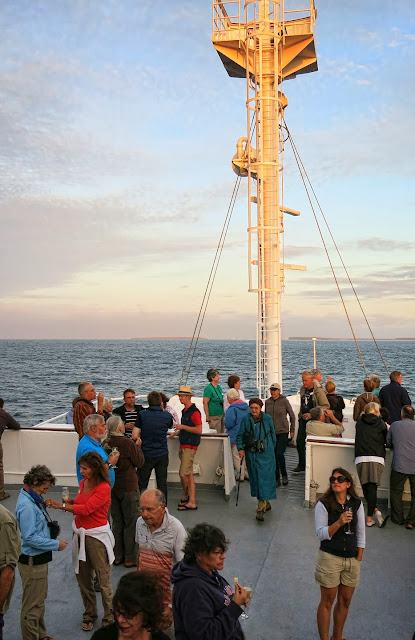 This evening, instead of the usual cocktail hour in the ship's lounge, the captain treated us to champagne outside on the bow. (Just because the Endeavour is an expedition ship rather than a giant floating hotel doesn't mean that we aren't traveling in very comfortable style.) We sailed around the small island of Daphne Major, where major scientific research into Darwin's finches goes on, until the sun set and it was time for dinner.

I continue to be surprised by how temperate the climate is. I know that sea currents keep the temperatures in the Galapagos much lower than you'd expect at the equator (and the water is often VERY cold) but I wasn't expecting the cool breezy temperatures we have day after day on the ship and the beaches. It gets hot as soon as you move inland, and in the highlands on Santa Cruz it was hot and humid, but on the ship it's usually just about perfect.
Posted by Kathleen at 9:00 PM