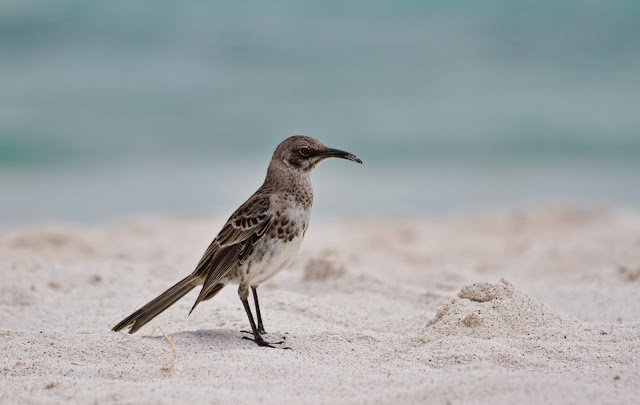 The finches get all the attention -- the species in Galapagos are even called Darwin's finches -- but it was actually the mockingbirds that first interested Darwin. (Darwin didn't even bother to label his finch specimens by which island they'd come from, but fortunately, others on the Beagle did.)


My attention was first thoroughly aroused, by comparing together the numerous specimens, shot by myself and several other parties on board, of the mocking-thrushes, when, to my astonishment, I discovered that all those from Charles Island belonged to one species (Mimus trifasciatus) all from Albemarle Island to M. parvulus; and all from James and Chatham Islands (between which two other islands are situated, as connecting links) belonged to M. melanotis.  These two latter species are closely allied, and would by some ornithologists be considered as only well-marked races or varieties; but the Mimus trifasciatus is very distinct.

There are actually four species of mockingbird in the Galapagos; this is the one Darwin didn't see, the Hood mockingbird of Espanola.