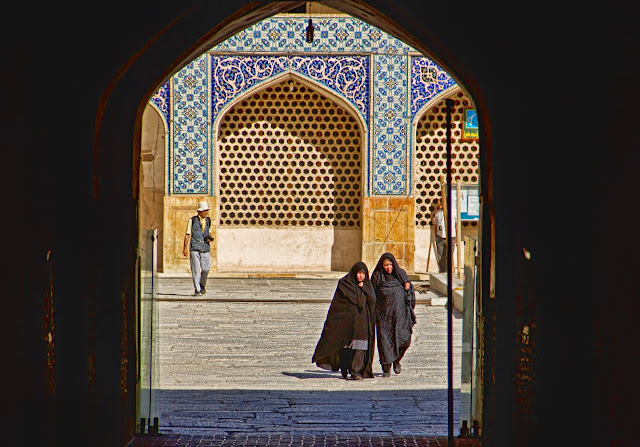 We've been inside at least a dozen mosques now, and there is a common pattern: a central courtyard, often with a place for ablutions before praying, and usually four iwans, the large vaulted rooms with one open wall, one on each side. There are arches, and squinches and domes, and beautiful tilework  and mosaics, and usually, though not always, minarets.

The Jameh mosque in Isfahan has all of those elements, but it's unlike anything else we've seen. For one thing, it's much older -- most of the mosques we've visited are only a few hundred years old, but parts of this mosque date from the 11th century, and every school of Islamic architecture since then is represented.

It's also the largest mosque in Iran. I could spend days there, looking at the brickwork and the evolution of the squinch. The pictures will give you some idea, but there's an atmosphere a photograph can't capture, of a place that's been regarded as holy for a very long time.