Whoa, dude, what happened to you? 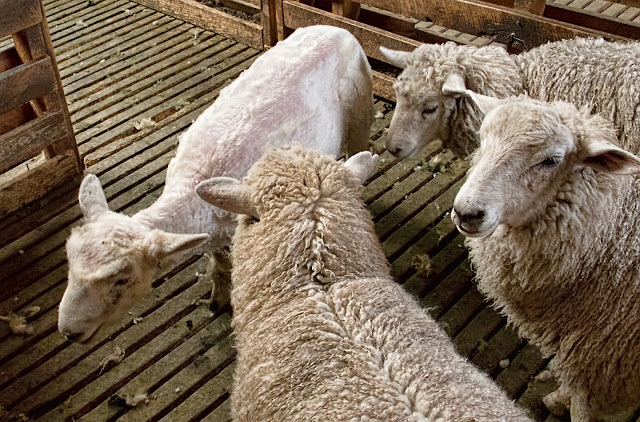 The first part of the drive from Christchurch to Mount Cook was flat farmland, with lots of cows, even more sheep as you would expect in New Zealand, and quite unexpectedly, deer. You never think of deer as farm animals, but in New Zealand they're raised for venison and you pass hundreds of deer grazing contentedly one field over from the Merino sheep and Angus cattle.

We stopped at Morelea Farm in mid-afternoon, where we saw a demonstration of sheep shearing (the poor lamb, seen in the picture, did not appear to enjoy it) and sheep herding. One old sheepdog, who could barely hobble, kept following me around and putting an arthritic paw on my leg to ask for ear scratches, but when it came time for the herding, she knew her part -- vigorous barking -- and performed admirably before collapsing under a tree.

At this point of the trip, I know how she feels. The fact that I had only one of the delicious homemade scones served with jam and cream and tea behind the farmhouse afterwards shows that, despite appearances, I must be made of fairly stern stuff myself.