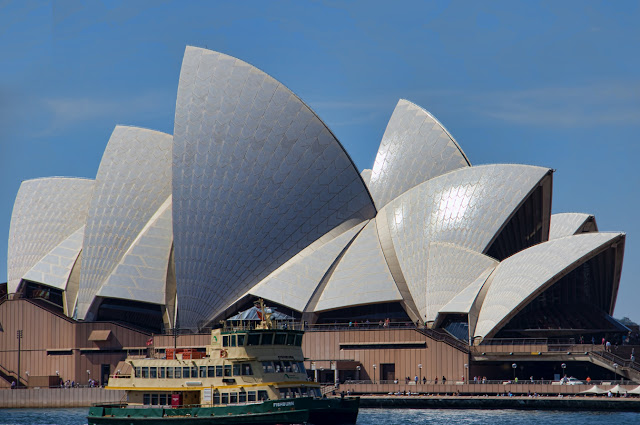 This is the usual view of the Opera House, with those curved concrete structures dominating everything else. They're usually described as “shells,” but the architect, Jørn Utzon, was inspired by the memory of sails on the water when he was a boy in Denmark, and I like thinking of them as sails over the harbor.

When Utzon's design won the competition in 1957 -- the story is that Eero Saarinen picked it out of the pile of rejects and insisted that it win -- no one, including the architect, had any idea how to actually build the thing. It took until 1963 to figure out that the sails had to be sections of a sphere, rather than the original parabolas, and sizing and placing them required the use of computers, a radical notion in the early Sixties. In 1966, after changes in government and ongoing battles over cost overruns and fees, Utzon resigned and returned to Denmark. He never saw the finished building, and when it was officially opened by Queen Elizabeth in 1973, his name wasn't even mentioned at the ceremony. But it did win him the Pritzker Prize for architecture, and he lived to see it declared a World Heritage Site in 2007.