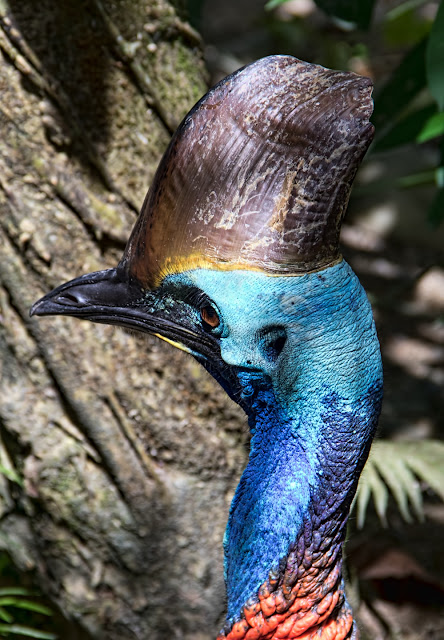 The world those first Englishmen found was famously inverted – its seasons back to front, its constellations upside down—and unlike anything any of them had seen before in the near latitudes of the Pacific. Its creatures seemed to have evolved as if they had misread the manual. The most characteristic of them didn’t run or lope or canter, but bounced across the landscape like dropped balls. The continent teemed with unlikely life. It contained a fish that could climb trees; a fox that flew (it was actually a very large bat); crustaceans so large that a grown man could climb inside their shells.

In short, there was no place in the world like it. There still isn’t. Eighty percent of all that lives in Australia, plant and animal, exists nowhere else.

--Bill Bryson, In a Sunburned Country

This improbable creature is a cassowary, a bird the size of a golden retriever -- or at least this one was; they can grow to be more than six feet tall. No one knows what that bony mohawk on top of their heads is for, maybe for amplifying sound, maybe for protecting their little cassowary brains from falling fruits in the rain forest.

And yes, like most of the wildlife in Australia, they can kill you. They have a 5-inch claw on their feet, and they attack by kicking.