In the evening I walked through the town, and returned full of admiration at the whole scene. It is a most magnificent testimony to the power of the British nation. Here, in a less promising country, scores of years have done many more times more than an equal number of centuries have effected in South America. My first feeling was to congratulate myself that I was born an Englishman. Upon seeing more of the town afterwards, perhaps my admiration fell a little; but yet it is a fine town. The streets are regular, broad, clean, and kept in excellent order; the houses are of a good size, and the shops well furnished....The iron gangs, or parties of convicts who have committed here some offense, appeared the least like England: they were working in chains, under the charge of sentries with loaded arms.


That's our old friend Charles Darwin, visiting here with The Beagle in 1836, almost fifty years after the First Fleet of convict transports arrived in Sydney in 1788. It's easy not to think about the tragic origins of the country when you're in Cairns or Alice Springs; they were settled long after the system ended, and if the men who built the Kuranda railway suffered on the job, at least they did it as free men, unlike the convicts who built the roads out of Sydney.

The English government had intended to create their penal colony in Botany Bay, which Cook had described eighteen years earlier, but found the harbor too small for their ships. Sailing up the coast, looking for a better landing spot, they found a narrow harbor entrance Cook had missed, which opened up into an enormous series of bays and estuaries.

Now you fly over Botany Bay when you're landing at the airport, and the Rocks, where the original convict ships landed, is a chic neighborhood of restaurants and shops. 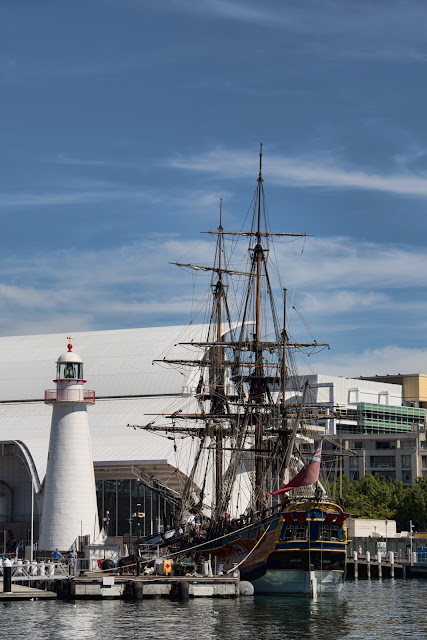 For night and day the irons clang, and like poor galley-slaves
We toil and toil, and when we die must fill dishonoured graves.

But bye-and-bye I’ll break my chains: into the bush I’ll go,
And join the brave bushrangers there – Jack Donohoo and Co –

And some dark night when everything is silent in the town,
I’ll kill the tyrants one and all, and shoot the floggers down,

I’ll give the Law a little shock: remember what I say –
They’ll yet regret they sent Jim Jones in chains to Botany Bay.