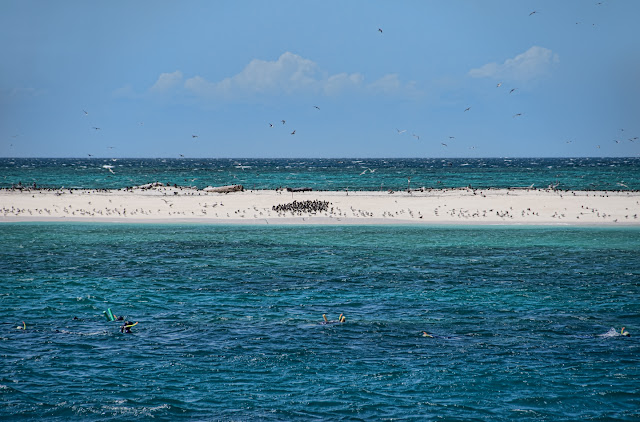 When we got back yesterday, I had to walk to the mall because, typically, I'd somehow managed to leave my camera cable in the hotel in Melbourne. It was maybe a fifteen minute walk, but after an afternoon in the rain forest I was already tired, hot and sweaty, and trudging through the steamy streets of Cairns did nothing to improve my appearance or my mood.

So today's agenda sounded delightful -- a two hour boat ride out to Michaelmas Cay and a day spent exploring the Great Barrier Reef.

The GBR -- really a series of reefs, the length of the West Coast of the United States -- doesn't flaunt itself. You could be sitting on top of it and never realize it's anything more than a fleeting shadow in the shifting blues and greens of the ocean. The cay itself is just a small flat sliver of sand and most of it is off limits because seabirds nest there (all those black dots in the picture are birds). There are no facilities, not even a tree or a bit of shade, so it was baking hot and smelled, not altogether pleasantly, of bird. It's literally just some sand to sit on when you're tired of being in the water.

Fortunately I was mostly in the water, as that's where all the magic is. First there was a ride in the semi-submersible, a small boat that's mostly underwater, with large windows along both sides. I was excited about seeing the reef; I was completely unprepared for how amazing it was, a whole universe of different shapes and colors of coral, shimmering in the shafts of sunlight while schools of tiny fish in bright colors swooped around.

And after lunch, I crammed myself into a lycra wetsuit and went snorkeling, which was an order of magnitude better than the boat ride. As soon as I put my face in the water I could see tiny, almost translucent fish that were invisible from the surface. Swimming along and then over the top of the reef, seeing the coral waving in the wake of my flippers, watching it react to the same currents I could feel pulling me along, was one of the best experiences of my life. At one point I floated directly above a giant clam longer than my forearm. It stared at me with its hundreds of tiny blue eyes and I stared right back at it, two alien beings rocking in the waves of the same blue sea.