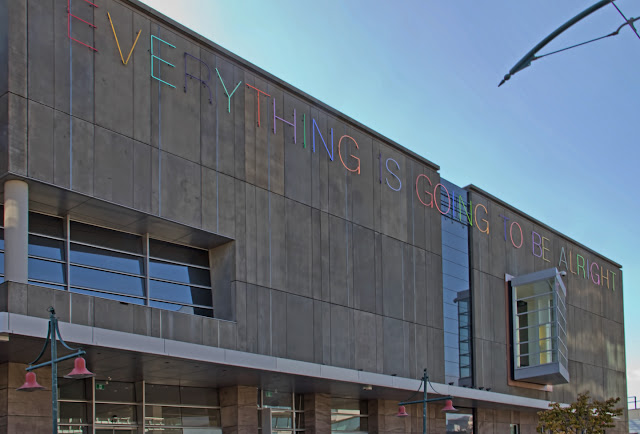 This is the art museum in Christchurch, proclaiming optimism in rainbow colors.

When I first saw the itinerary for this tour, I was disappointed that we only had half a day in Christchurch. I'd always heard that it was a jewel of a city, more English than England, and since very little of our time in New Zealand is spent in cities, I would have liked to see more of the ones we do visit.

We flew from Sydney yesterday evening, and with the two-hour time difference (we're now 16 hours ahead of New York -- you do start to feel like you can't go much farther without dropping off the planet -- but I digress) it was midnight by the time we got to our hotel. On the drive in from the airport, I noticed rows of motels with No Vacancy signs, and I asked Tricia if the schools were on holiday, as they are right now in Australia.

She said no, that it was just that aren't very many places to stay in Christchurch and so they fill up. And that was the first time I really understood that things are far from being back to normal there, that it's a city still recovering more than five years after the worst of a series of devastating earthquakes killed 185 people in 2011.

That was brutally obvious this morning, when we drove through the central business district. Huge hotels and office buildings are empty, and there are blocks of empty lots where buildings have been demolished and not yet replaced. (The CBD was cordoned off after the earthquake and no one was allowed to enter for more than two years while the infrastructure -- power, water, streets, sidewalks -- was rebuilt.) But gardens are still blooming -- it's autumn here of course -- and there are willow trees along the river and you can still see the graceful bones of the former city under the scars.