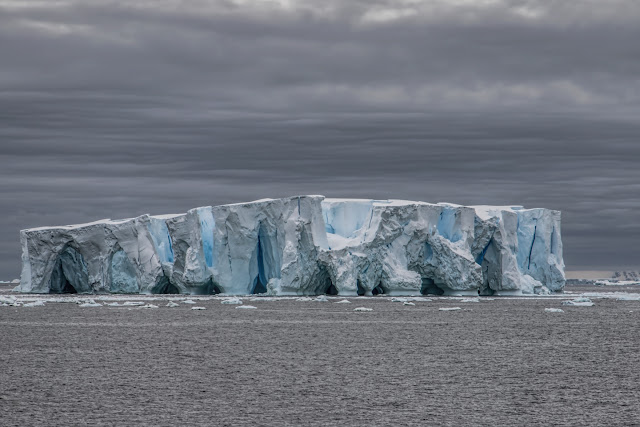 I have many, many more pictures of snowy mountains and penguins and icebergs to review and eventually share. (The Cuverville Island pictures are from January 24th; we flew back to Chile on the 31st.)

On the 25th we crossed the Antarctic Circle, and had champagne on deck to celebrate. That afternoon, we landed at Detaille Island, which is seldom possible on this itinerary and which we were really lucky to be able to visit. (One of the expedition crew said that in ten years of coming to Antarctica, he'd gone ashore there three times.) I was looking for the pictures I took of the abandoned British station there when I came across this picture, which I must have taken not far below the circle -- somewhere after the champagne but before Detaille Island.

That's a pretty spectacular iceberg. And I had no memory of having seen it before finding this picture. Admittedly, I saw a lot of icebergs on this trip, hundreds of them, but still.

I think it shows just how extraordinary this trip was, the state of constant amazement I was in, that this iceberg didn't even register as something out of the ordinary.