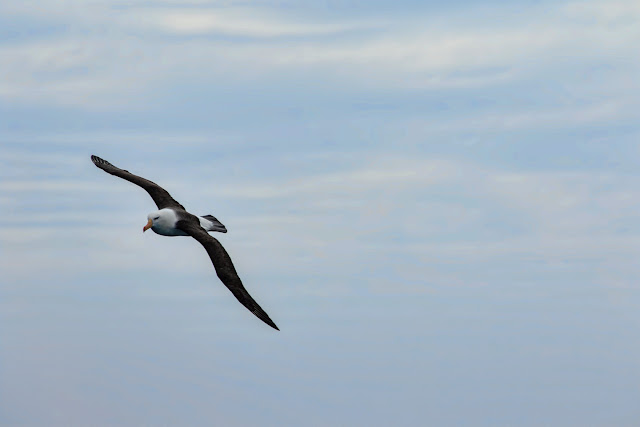 I'm terrible at identifying seabirds, but I can confidently state that this is an albatross, most likely a mollymawk or black-browed albatross.

We had dozens of albatrosses and petrels around the ship the first two days at sea. The petrels were closer and easier to photograph because some of them circled the ship over and over again; if I missed getting a picture I'd just wait for it to come around again. The albatrosses kept their distance, but I loved watching them swooping through the troughs of the waves.

Alas, this wonderful opportunity for bird photography didn't result in equally wonderful photographs because the two days of constant birds were the two days we were in the Drake Passage. We had a fairly smooth crossing, apparently -- one man I talked to had done the trip twice before and he said that the first time was similar to ours, but the second trip was much rougher, with huge waves crashing over the decks and no one allowed outside.

We were told to always keep “one hand for the ship”, ready to grab a railing for the next toss or turn. The stairs required two hands and a firm grip; we spent a lot of time on the stairs during those two days going from presentations in the lecture room on the first floor to the dining room on 3 and the lounge on 6 and my shoulders ached from the effort to keep myself upright. The second night at sea I woke up in the middle of the night to use the bathroom. I stood up, half-asleep, and immediately slammed into the couch on the opposite side of the room. I had to drag myself to the toilet using the railings and hold on to the sink to stay on the seat.

Fortunately I don't get seasick. Some of the group really suffered the first day or so until the drugs took effect, and a few were stuck in their cabins until we reached calmer waters. Our itinerary had us fly back from Antarctica so we could go farther south, but most trips include a return trip on the Drake Passage and that must be horrible for the seasick -- knowing that you had to go through two more days of that at the end of the trip.

So it was easier to watch the birds than to photograph them. Balancing a long lens, finding the bird, focusing, and shooting, while bracing my body against the ship trying not to fall over resulted in more than the usual number of empty shots of sea or sky, or a tip of a wing or a tail as the bird flew out of the frame.