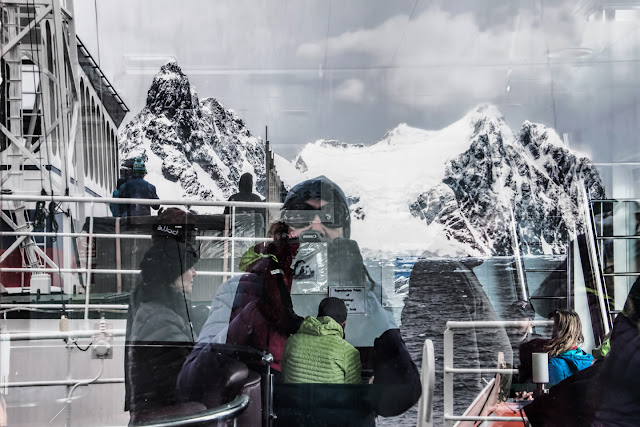 Here I am, standing on the stern deck, reflected in the window to the lounge, with the ship and the Lemaire Channel mountains in the background. We sailed through the channel one afternoon before lunch, and most of us were out on the decks taking pictures the entire time, despite chilly temperatures and gale-force winds. I took this photo as a lark because it was a fun reflection, and I'd already taken many standard pictures of the amazing landscapes around us.

And this picture ended up winning a prize in the end of the voyage photography competition.

Much to my surprise. When you go somewhere as ridiculously picturesque as Antarctica, there's bound to be big interest in photography. We had many serious, highly-skilled photographers in the group, and several presentations on composition and technique from the ship's photographer. The competition had four categories: animals, humans, classic composition, and creative vision, and when I saw some of the other entries people had uploaded, technically stunning captures of wildlife and landscape, I almost chickened out on entering at all.

But no one else thought to see Antarctica as a reflection, and though it felt a little like a cheat -- this is easy, this is what I do -- you could definitely call it my creative vision, and that's the category I won. (I was also a finalist in the human category, and I'll post that picture next.)

I don't think I'll ever be able to get wildlife pictures like the ones some of my fellow travelers got -- sharp and detailed and beautifully composed -- but maybe that's all right. My strengths clearly lie elsewhere.