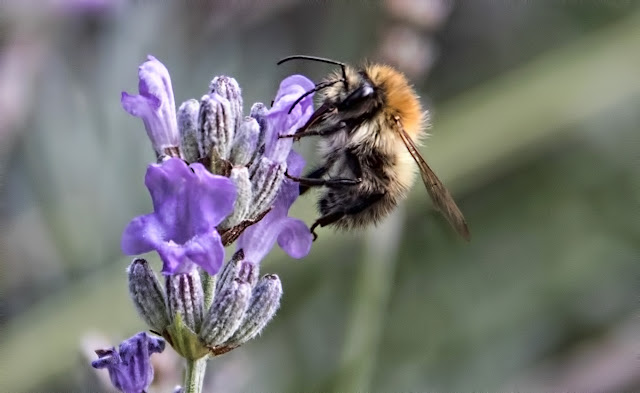 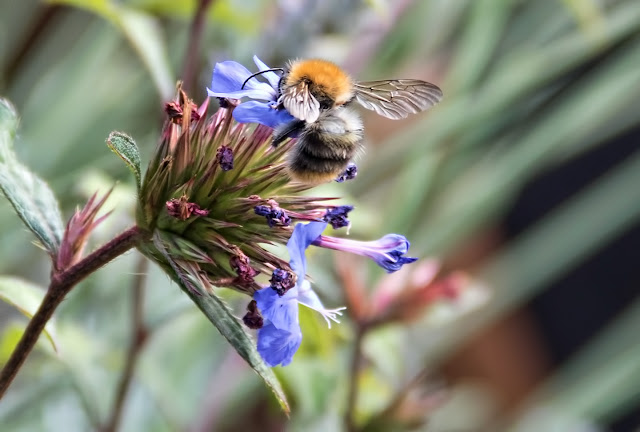 I don't do a lot of macro photography because the things I'm interested in tend to be large enough to capture with ordinary lenses. But I couldn't resist these bees in Hyde Park this afternoon.

I took the train back to London from Southend this afternoon, and I'm ensconced -- that seems the appropriate verb -- at the Grosvenor Hotel at Victoria, a very traditional style London hotel with a grand lobby, ornate staircases, and old oil portraits on the walls, all of it a nice contrast with my grubby post-Scotland wardrobe. Fortunately, everyone is far too well bred to notice.

I walked over to Hyde Park during the brief lapse of sunshine this afternoon; it's probably been decades since I was there, and it was reassuringly exactly the same -- ridiculously, beautifully English. There were robins (European robins, of course, not the vulgar American version) singing in the trees, a squirrel in the shrubbery thoughtfully munching on the greenery, and bees making their final rounds of the day. Plus a woman in a tweed coat with thick ankles and sensible shoes dozing on a bench.

On the way to the park, I kept hearing a flute, and it was playing, of all things, the Skye Boat Song. For a moment I thought my Scottish ghost had followed me south, but I could actually see this musician when I turned around -- an older gentleman with long stringy gray hair. Like the Culloden ghost though he did follow me, all the way to Hyde Park, where he turned down a different path and the sound of his flute was soon lost under the noise of the early rush hour traffic.