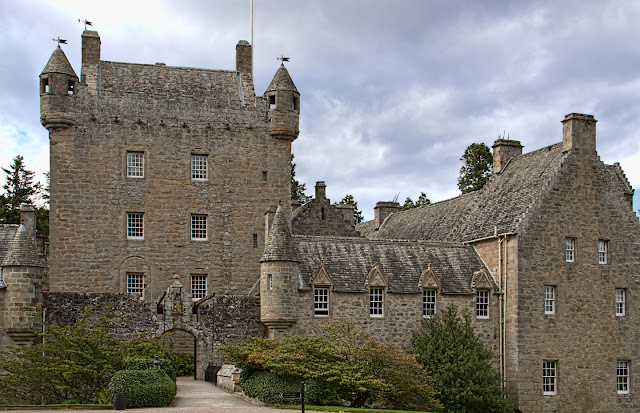 Say "Cawdor Castle" to any English major, and he or she will immediately think of Macbeth. In Shakespeare's play Macbeth was the Thane of Cawdor, a title still held by the current Earl Cawdor (the 26th Thane.)

The real Macbeth was king of Scotland, but sadly he was not Thane of Cawdor, and even if he had been, the oldest part of this castle dates from the 14th century, 300 years after Macbeth lived. (He was also probably a very good king, and did not kill his predecessor Duncan, who actually died in battle. It's possible that there weren't even any witches involved! Proving once again that as a historian, Shakespeare was an excellent playwright.)

So there's no real literary reason to visit, and I had no intention of doing so, having seen better castles and better gardens already on this trip. But something totally unexpected happened yesterday -- instead of the rain that was forecast, the sun came out mid-morning and it turned into yet another beautiful day. I hadn't made any real plans, because I expected it to be wet. I thought I'd go to the museum, or Inverness Castle, or drink a lot of tea and read my book, or some combination of the above.

It was too late to sign up for a day tour, but I talked to one of the tour operators outside the visitor's centre, and one of the guides who happened to be available agreed to give me a half-day private tour for not much more than I would have paid for a full day on a bus. So I spent a lovely afternoon being driven around by Jim, who took me to Clava Cairns and Cawdor Castle, and a few places he thought I'd like to take pictures of (like the viaduct below), and I felt like a princess with a coach and chauffeur.

A splurge, yes, but definitely worth it.