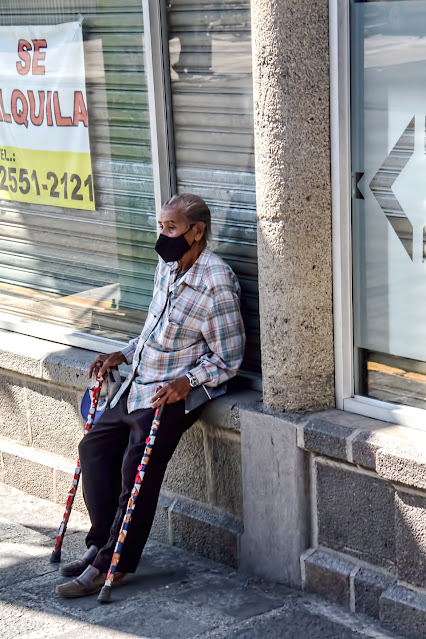 Cartago is about an hour southeast of San José. It became the first capital of Costa Rica in 1563, but extensive volcano damage in 1732 led to its being gradually overshadowed, and then replaced, by San José.

It's most famous for La Negrita, the Black Madonna shrine at the basilica. Unfortunately our visit coincided with the annual pilgrimage to the shrine so we couldn't visit the basilica, and though we saw the crowds of pilgrims, some of whom had been walking for days, I couldn't really get any good pictures from the bus.

My idea of a pilgrimage is obviously a couple of centuries out of date, because these pilgrims, with their sneakers and athletic wear and backpacks, looked like any group on an organized long walk. One thing I'd never seen before: there were the usual tables handing out water and snacks to the pilgrims as they passed by, but instead of bottles, the water was in plastic bags knotted at the top. I half-expected to see goldfish.

I don't know if this gentleman was a visitor or lived in Cartago. He was sitting by himself on the main street, watching the crowds go by.
Posted by Kathleen at 3:58 PM