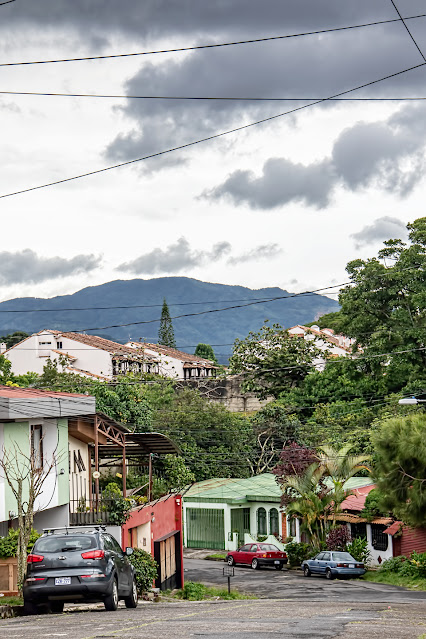 This is the street where my AirBnB was located, a pleasant residential block, and the scene of one of my more amusing introductions to Tico culture.

I woke up one day with a mild case of the sniffles, and though the Covid test was negative, I stayed home to be on the safe side. I didn't have any food in the house, so I decided to try Uber Eats.

We'd all been using Uber a lot—it was easy and cheap. (For example, it was a thirty-five minute walk to the language school from my house. Ubers generally arrived in a couple of minutes; the ride took not much more than that, and cost around three dollars.) Although San José has both a convoluted street grid and a really peculiar system of identifying addresses, where you don't really give a house number, you give directions in reference to the nearest landmark (“It's next to the church on the corner” “It's across the street from the San Pedro Mall”) the Uber drivers never had a problem finding me.

The Uber Eats system turned out to be a little different. After I placed the order, I got a message that my food would arrive around 12:15, but they didn't provide minute by minute updates the way the ride app does, and they didn't show me a map of my location. I happened to glance at my phone shortly after noon, and saw a message that my delivery was outside, the driver couldn't find me, and the order would be cancelled in seven minutes if I didn't go get it.

I ran outside, but the street was empty. I was frantically typing a message to the driver when a man approached me. He asked me if I was Kathleen and if I had ordered food. When I said yes, he let out a piercing whistle, and yelled “Aqui! Aqui!” Another man at the bottom of the hill also started shouting “Aqui!” and a woman who was standing in front of the green house started waving her arms over her head and ran down the road out of my sight. After a minute, a motorbike appeared around the corner and climbed the hill and the driver gave me my lunch. And all of the neighbors disappeared back into their houses, having solved the mystery of Kathleen y su comida.