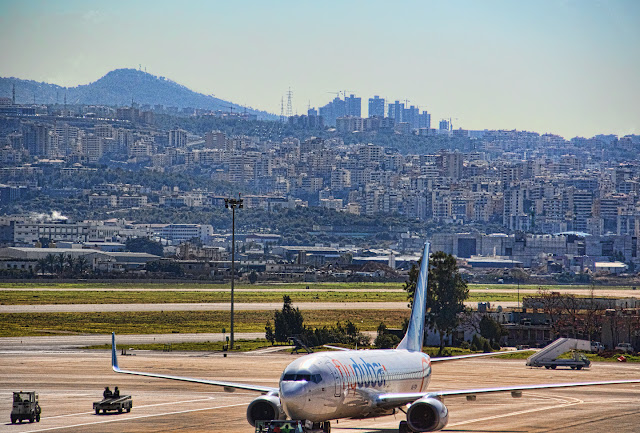 This crappy picture, taken through the window of an airport lounge, is being posted just because I expect it's all most of us will ever see of Beirut. I'm here for four hours, waiting for my flight to Paris, eating the mini pizzas and overly sweet cookies that are the only snacks available and going through my Wadi Rum pictures.

I know large parts of the city are still scarred into ruins by years of war, but I didn't see any of that flying in -- just green hills running down to the sea, with a cradle of snow-capped mountains behind. We flew over wide boulevards full of weekday traffic, glass office towers, apartment buildings, slums -- a city, in other words, much like any other.

Even if I had time and a visa, I wouldn't be tempted to go outside. I had to go through security four times to get from my hotel in Amman to this lounge in Beirut, and I'm definitely tired of (though obviously grateful for) the intense security of Middle Eastern airports. For some reason, my zoom lens has been considered especially suspicious -- it's been pulled out and looked through at every checkpoint. No one seems to believe that it goes with my camera.