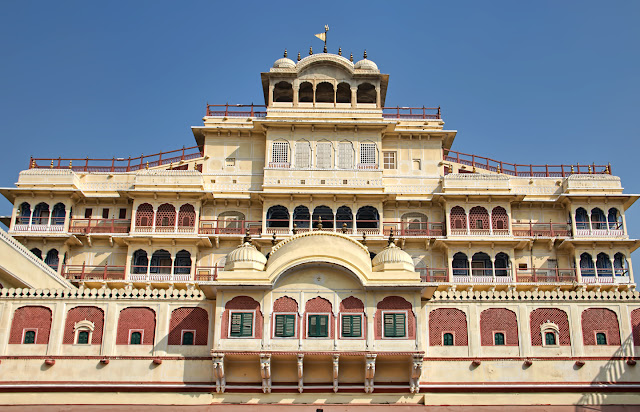 Jaipur is named for the Maharajah Jai Singh II, the kind of enlightened ruler and multi-faceted genius the eighteenth century seemed to produce in quantity. In addition to being a talented astronomer who built several observatories, he translated books, and created the most formidable army in Northern India. He moved his capital from Amber to the current location in 1727 because of water needs for the growing population, and worked with architects to design the new city with large blocks separated by wide avenues using classical Hindu principles of architecture.

He built the first walls and buildings of the City Palace; later rulers have added and embellished. This building (which to my untutored eye looks more like a seaside hotel in England than an Indian palace) is the Chandra Mahal, which still belongs to the maharajah's family and isn't open to the public.