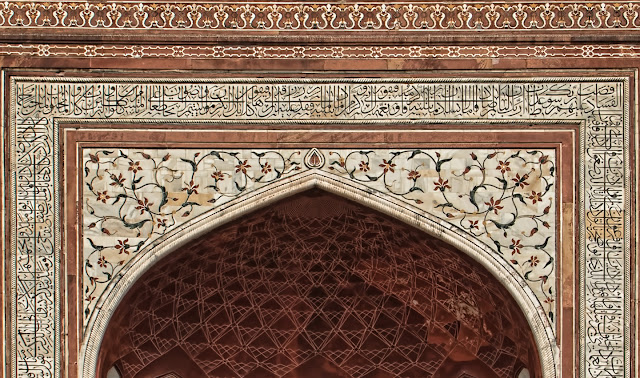 If you're thinking this looks an awful lot like a mosque, complete with calligraphic verses from the Koran, that's not a coincidence.

I probably knew that Shah Jahan, the emperor who built the Taj Mahal, was Muslim, but I never really thought of the Taj as an Islamic landmark. But that's exactly what it is. The Mughals, who ruled India from the 16th to the 18th centuries, were a Central Asian people claiming descent from both Tamerlane and Genghis Khan. Though Shah Jahan himself was not all that tolerant of non-Muslims, the Mughal culture was a fusion of Hinduism and Islam, reflected in art and architecture.

I don't see a lot of Hindu influence here, but there are lotus motifs all over the Taj Mahal, acknowledging the Hindu sacred flower.