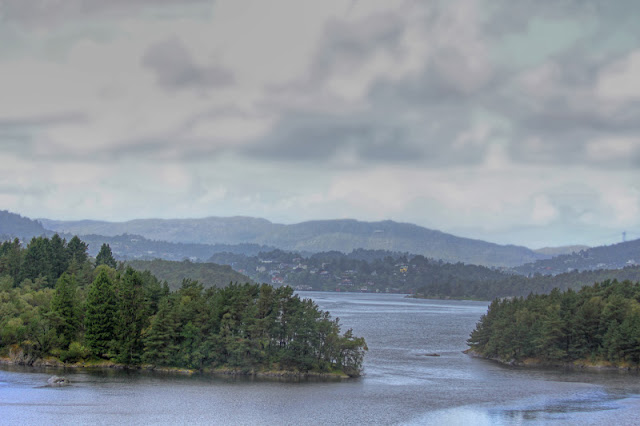 Edvard Grieg's home, just outside Bergen. This is the view from the main house.

Our guide was very charming, and so very badly wanted for us to love Bergen as much as he does, but between his Norwegian accent and the drowsiness induced by the rainy day and the overheated bus, I couldn't always follow what he was saying.

For example, we drove past one of the royal palaces and he talked about the Norwegian government, and he kept making reference to the kingsvetta.  Which to my sleepy mind sounded like the king's sweater, and I couldn't understand why the king's apparel choices had any political consequences. I finally realized that he was saying king's veto.

Then he started going on and on about the Greeks, and I was even more confused since as far as I know Greece has never had much to do with Norway. Since we were on our way to Troldhaugen, I should have realized a lot sooner that he was saying the Griegs, not the Greeks.