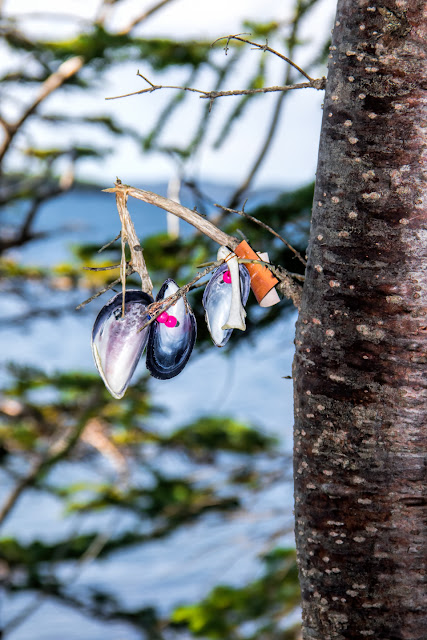 Boyd's Cove is the site of a museum dedicated to the Beothuk,  one of the indigenous peoples of Newfoundland. The remains of a Beothuk encampment nearby was excavated in the 1980's.

Shanawdithit, the last known Beothuk, died in 1829. Because they avoided contact with Europeans, very little is known about their culture. They lived on caribou, fish and seal; they used red ochre to paint their bodies, houses, boats and weapons, and the Europeans called them red Indians, the origin of the pejorative redskin; they pilfered metal from the Europeans and turned nails into scrapers and arrowheads. As European settlement in Newfoundland grew, they were driven inland away from their food sources; those who didn't die of smallpox or tuberculosis starved.

Outside the museum, there's a wonderful spirit garden on the tree-covered slopes running down to the cove. You can make your own blessing from shells, pinecones, feathers and other natural materials and hang it on one of the trees.
Posted by Kathleen at 9:58 PM