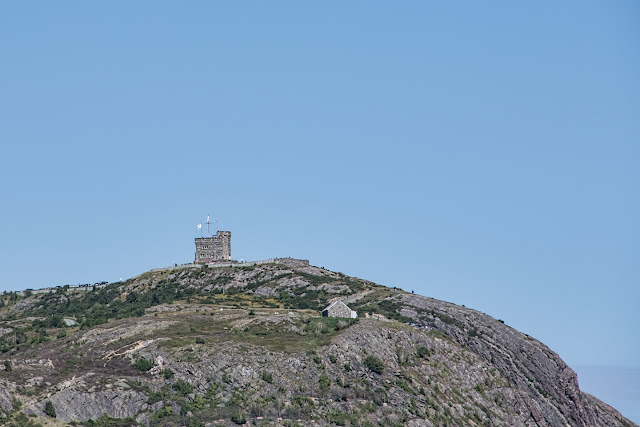 Here's Signal Hill, the mountain that overlooks the harbor of St. John's, seen from the city. The driver pointed it out as we drove in from the airport, so it one of the first things I saw in St. John's and I might as well start there.

So, fun facts: Signal Hill was the site of the last battle of the French and Indian War (or the Seven Years War, for non-Americans) in 1762.

Marconi received the first transatlantic wireless transmission here in 1901. (Because “transatlantic” is much shorter from Newfoundland than anywhere else in North America, the island was also the starting point for many of the early transatlantic flights, including Amelia Earhart's in 1932.)

Cabot Tower was built in 1897 to commemorate the 500th anniversary of Cabot's landing in Newfoundland as well as Queen Victoria's Diamond Jubilee.  It looks rather jaunty sitting on top of its mountain with banners flying when seen from the streets of the city below like this, but up close it's just a surprisingly small stone building.
Posted by Kathleen at 6:06 PM