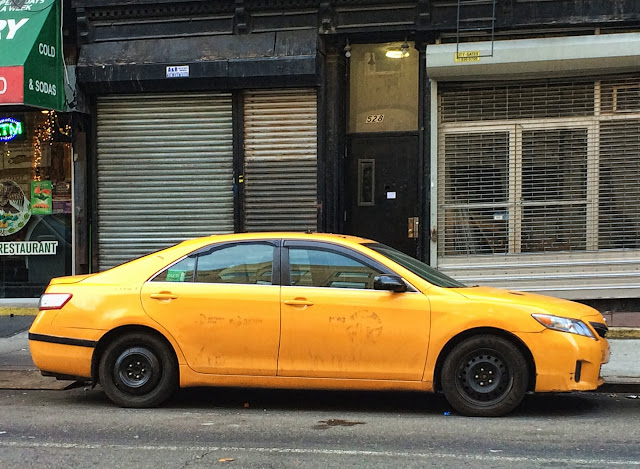 A yellow car pretending, without much success, that it wasn't recently working as a yellow cab. I assume a paint job is in its future.

I sympathize -- undoing isn't easy. I have unplanned and re-planned my upcoming vacation now, and while most of it turned out to be simple enough once I actually had some destinations in mind (I'll write about that more later) some things were ridiculously complicated.

For example, the flight that I had booked from Addis Ababa home to New York, changing planes in Paris, was so unexpectedly cheap that I paid for business class rather than trying to snag an upgrade. It was going to be two very long flights so it was worth it, and I had been looking forward to the chance to have a French breakfast along the way, even if it was in an airport.

I decided that I still wanted breakfast in Paris on the new itinerary, and a couple of lunches and dinners while I was at it, so the layover is now a three night stay, returning to New York the same day I originally planned. I just needed to cancel the Addis Ababa to Paris segment of my plane reservation, and keep the Paris to New York segment. I didn't even care whether I got a partial refund or not -- well, I didn't care much -- since the fare had been such a bargain.

Should have been simple, right? Au contraire. Instead of a refund, the airline wanted to charge me $3000 to make the change. Three thousand dollars. The convoluted venality of your major American airline is already familiar to anyone who has dealt with them, but I actually burst out laughing at the sheer outrageousness of this. Three thousand fricking dollars to use half of a ticket I'd already paid for -- that is some world-class highway robbery.

Needless to say, I did not accept their generous offer. I cancelled the entire ticket for a full refund, and used miles to buy the same seat I had originally. For free.