Look, up in the sky! 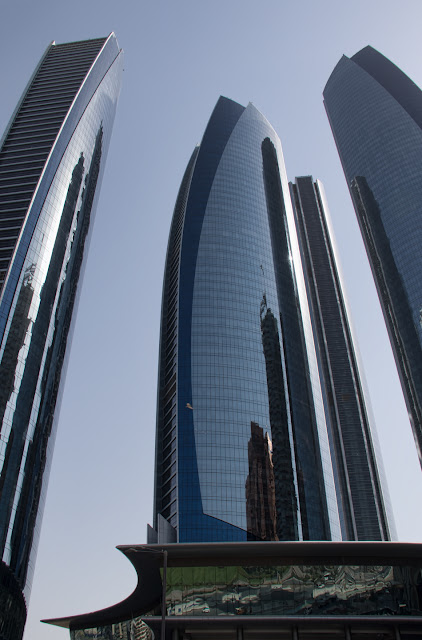 It's a bird!
It's a plane!
It's Petrodollars!

Manifested here as three of the Etihad Towers.

I had never realized how new everything in the Emirati cities is. A little more than fifty years ago the people in Abu Dhabi were living in mud huts. Oil was discovered in 1958, and the seven emirates that comprise the UAE formed a federation in 1971. There are old forts and oasis cities out in the desert that are older, but in the city even the landmarks are new. The Grand Mosque is nine years old, and the Emirates Palace Hotel, which cost 3 billion dollars, opened in 2005. And the mud huts now exist only as replicas for the tourists in Heritage Village on the Corniche.

The collapse in oil prices doesn't seem to be slowing down construction here -- new towers, new palaces, new luxury villas are going up everywhere. And some of the architecture is stunning. I didn't get to see a few of the more interesting new buildings -- one shaped like a coin, balanced on one edge, and another that tilts like the Leaning Tower of Pisa -- but I loved a lot of what I did see, like these towers.
Posted by Kathleen at 1:19 AM