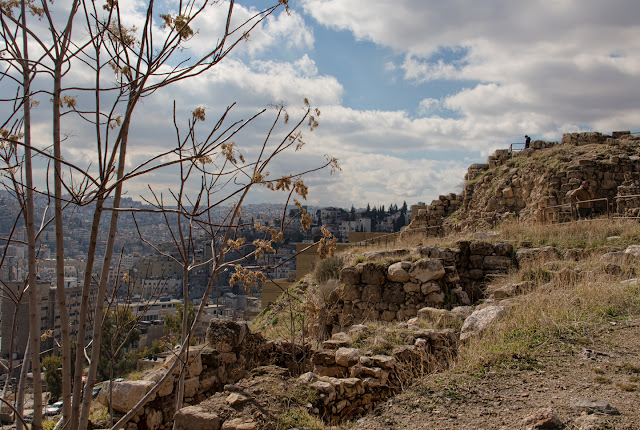 Amman, like Rome, was originally built on seven hills, and this is the view from the tallest of them, Jebel al-Qala'a. There's a complex of Roman and Umayyed ruins known as the Citadel at the top of the hill, and caves that have been used since the Bronze age. It was also the site of one of those gruesome Old Testament slaughters when King David burned many of the inhabitants of what was then known as Rabbath alive.

It snowed here yesterday, but I got lucky with the weather today -- chilly enough to need my coat, but not the scarf and gloves I carried just in case, and mostly clear skies. When I asked at the front desk about getting a cab to the Citadel, they found me a driver who volunteered to take me around the old city downtown and back to the hotel for 20 dinars (about 28 dollars.) Since I only got a few hours sleep last night and only have today in Amman, that worked out perfectly. I saw what I really wanted to see, and I was back at the hotel drinking coffee by late afternoon.