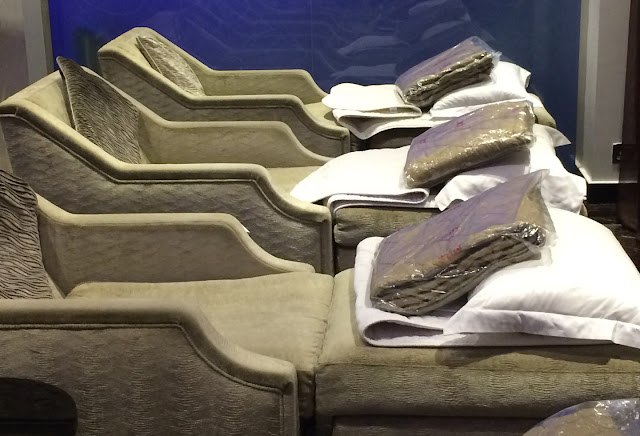 This is a quick phone snap of one of the amenities at the Oman Air business class lounge in Muscat, where I am waiting for my flight to Amman: chaises complete with blankets and pillows where one can take a  nap. That's my idea of an airport lounge. Plus, the pistachio cookies are delicious.

One of the things that I had a hard time with in India was all of the sometimes obsequious service. I'm not someone who bristles if someone opens a door for me; I believe in common courtesy. But when I've stopped for ten minutes at a truckstop on an Indian highway, and ordered a cup of tea, I just don't know how to respond when the owner not only brings the tea and pours me out a cup, but insists on adding the sugar and stirring it for me as well. When you use a public restroom, there's an attendant who hands you toilet paper when you go in, and turns on the sink for you to wash your hands afterwards. (The first time I encountered this, on the road to Bharatpur, the attendant was a man and it was disconcerting when he followed me into the bathroom and was waiting when I came out of the stall.) But you give the attendants 100 rupees, so you feel like they're not waiting on you so much as doing a job and being paid for it.

So I've been thinking about this and my reaction to it, which made my experience today especially amusing. When I bought this ticket, Jaipur to Amman, a prompt popped up asking if I wanted to buy a business class ticket instead for what seemed like a ridiculously cheap price (I don't remember exactly, but it was around $230, not much more than the economy price.) So of course I did. Comfortable seats and access to the lounge for the layover in Muscat -- count me in.

When I checked in at the Oman Air counter in Jaipur, I had to show my reservation and my passport and the credit card I'd used to pay for the ticket. There was a lot of whispered consultation, and then I was asked to have a seat and wait.

Well, that's never a good sign. I tried to remember why I wanted fly around these nervous parts of the world in the first place, and wondered where I'd go if for some reason they didn't want to let me into Jordan. I didn't think I was being arrested, but I did wonder what an Indian holding cell looked like.

Then the woman who'd escorted me to my seat reappeared with my boarding passes and it dawned on me that this was just service -- they didn't want to make me stand up while they tagged my luggage and printed my passes. She summoned another attendant who picked up my backpack and purse and I followed my new retinue through security and up to the lounge.

When it was time for my flight to board, I was escorted to the gate, and yet another attendant carried my luggage onto the plane, where I turned out to be the only passenger in business class. I was given lemonade and dates and Arabic coffee before takeoff, and provided with newspapers and an iPad with movies and mint tea during the flight.

When we landed in Muscat, I was obviously the first one off the plane. I walked down the steps to the tarmac and boarded the waiting bus, which immediately left with me as the only passenger. Yes, I got my own bus to the terminal.