The journey not the arrival matters 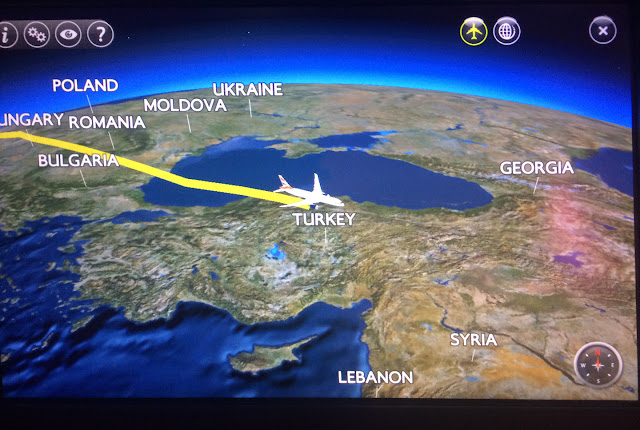 That's a quote attributed to both T.S Eliot and Montaigne, but after more than a couple of hours in airports and on planes -- even in business class -- the journeying becomes progressively less interesting and you just want to get to the arrival part.

I got to Abu Dhabi late last night after a long, but mercifully undramatic journey. The British Airways flight to Heathrow was a fully packed 747, and that was fun. I hadn't been on one in many years -- U.S. carriers are packing more and more people into smaller and smaller planes -- so this felt as though an entire city was taking off into the night. Business class alone was probably a couple of hundred people -- I was in row 22 -- and navigating my way to the bathroom in the middle of the night after they'd turned down the lights was like wandering through the streets of a strange, slightly spooky, village.

The Abu Dhabi flight was half-empty, and I watched two movies and then turned on the sky map, watching our progress past places I've been -- Poland, Turkey -- and places I haven't -- Georgia, Lebanon. It's exciting, and a little scary, to be doing it all on my own again, without relying on a tour group to make all the plans for me.

I'm cross-eyed with exhaustion, and I've been writing and re-writing these two paragraphs for at least an hour now so I'm going to give up, click Publish, and try to make more sense of where I am tomorrow.