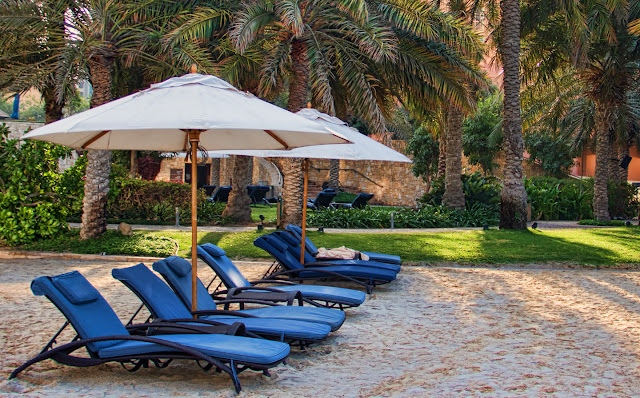 I'm pretty good at minimizing jet lag -- watch the caffeine, try to get on the new time zone schedule as quickly as possible -- but sometimes your body has its own ideas about time zones and when it's appropriate to be awake and you just have to ride it out.

I slept for a few hours on the plane to Heathrow, and then deliberately stayed awake on the flight to Abu Dhabi since we'd be arriving around bedtime. I felt okay, though I would not have wanted to have to pass an IQ test upon arrival, and I had a complete brain freeze at the cash machine. (What was the exchange rate again? I could remember the ones for India and Jordan, but not the one I happened to need at the moment. 5000 dirhams was probably way too many, but would 1000 be enough? How much was the cab likely to be again? I compromised on 2000 dirhams, which turned out to be approximately 540 dollars, most of which will probably end up getting converted to rupees next week.) But all I had to do was get a cab (83 dirhams, as it turned out) and check myself into the hotel, and I had enough functioning neurons to manage that.

I woke up yesterday morning feeling pleasantly fuzzy but more or less in synch with my surroundings. I wandered through the hotel gardens (that's the private beach in the photo, because of course there's a private beach) where doves were singing hoo hoo-HOO in Arabic, and tiny birds I couldn't quite see were chittering away in the palm fronds. The breakfast buffet was lavish, and I had a Middle Eastern meal of hummus and feta and black olives so briny they brought tears to my eyes and woke me up more thoroughly than the three cups of coffee. (Also a waffle.)

I decided to take a walk along the Corniche, and maybe even get on a bus tour if I saw a bus and I felt like taking a tour. But it was hotter than I'd expected and by the time I turned back, the red towers of the Sheraton were like a mirage in the distance that didn't seem to get any closer, and I felt like my batteries had run down but I'd been plugged into the wrong charger: Crackle, crackle zzz! Crackle, crackle zzz!

I tried hard to stay awake but finally went to bed around six, when I was literally falling asleep sitting up with my book in my hands, and woke up a few hours later. And again, around midnight, when I was awake until three. And again, just before dawn when the call to prayer jerked me out of a nightmare about wandering through Istanbul trying to find my hotel.

So Day 2, and I'm ready to give Abu Dhabi another try. Wish me luck.

Wow, really amazing world of attractive things in these snaps sharing. Thanks a lot for the share. House for sale in coimbatore | Villas for sale