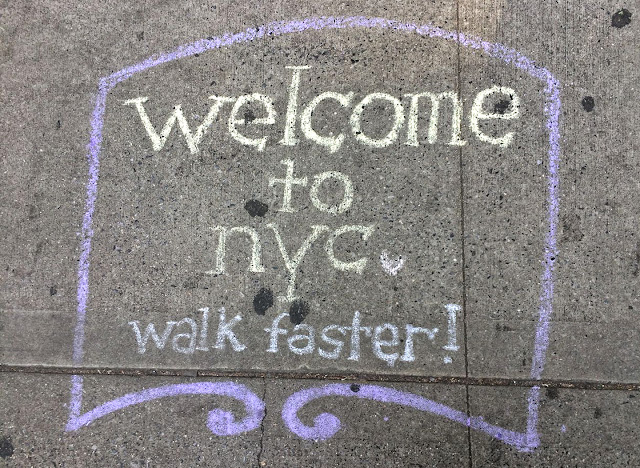 A message from the heart of all New Yorkers, scrawled in chalk on Ninth Avenue.

I don't usually mind when tourists walk slowly, as long as it is possible to get around them. What tempts me to behave like the worst stereotype of a surly, impatient New Yorker is when a group of people stand in the middle of the sidewalk for no apparent reason and are oblivious to all reasonable attempts to get through them or by them.

Tonight when I was walking home a large group of ten or twelve Chinese tourists stopped dead in the sidewalk to watch an ambulance making its slow frustrated way through rush hour traffic. Pedestrian traffic backed up and finally came to a dead halt behind them, while they discussed the situation. Phones were produced. Pictures were taken. Eventually the ambulance moved on and so did we.

Clearly we need more of these signs, in many many languages.