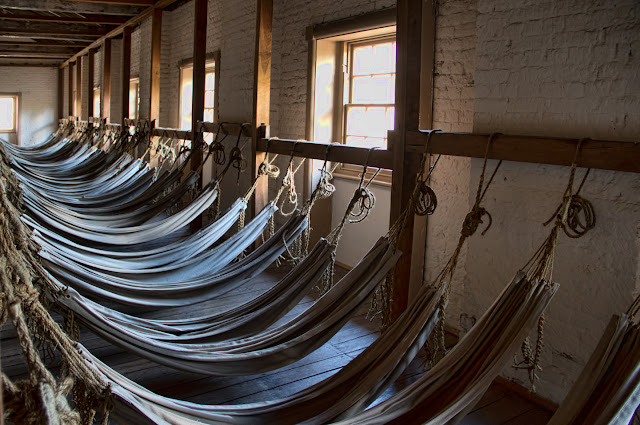 Because most human stories are sad.

I'm ending with the Hyde Park Barracks, now a museum in Sydney, and a wonderful reminder that the majority of the Europeans who first came here did so involuntarily and that this country, maybe more than most, was built on a foundation of suffering and injustice.

You could be transported here for what we would now consider petty theft, and governors who were seen as too lenient with the convicts were quickly replaced -- if life in Australia wasn't a horror, the reasoning went, then the threat of transportation lost its value as a deterrent to crime. Some convicts got lucky, assigned to work in a household or on a farm, where they had enough to eat and might be treated humanely. Others worked on chain gangs, or as human hamsters turning giant wheels for the mills, or waist-deep in cold water digging oyster shells.

One of the saddest details in The Fatal Shore, Robert Hughes' great history of the convict years, was the convicts who tried to escape by walking into the bush. They had so little sense of where they actually were that rumor had it you could walk to China by heading north. A few who tried this were caught; the rest quickly died from heat and starvation.