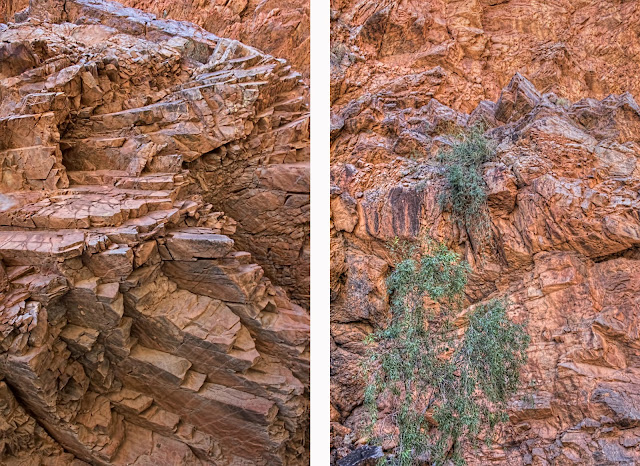 Circling back to the Outback, to the landscapes so old you can see how time has chewed them up and worn them down, I'm going to catch to try to catch up on the rest of Australia today.

Which is mostly the Outback, the point at which I began to see too much to take it all in, much less blog about it. (Or even sort through and process all the pictures I took.) This is Simpson's Gap, a narrow break in the MacDonnell Ranges outside Alice Springs, home to a permanent waterhole -- which is probably enough to make it a national monument in the Outback.

Years ago I was at a conference in Orlando, staying in hotels at Disney World. I went for a walk along the canal one evening, enjoying a moment of solitude and silence, when all of a sudden speakers hidden in the bushes started playing music. It wasn't awful music (I want to say that it was It's a Small World because that makes a better story, but I think it was just generic instrumental music) but I was simultaneously annoyed and amused -- annoyed because I had been enjoying the quiet but amused because it just seemed so Disney to assume that no experience was complete without a soundtrack.

I do hear music in this landscape though, something plaintive and a little otherworldly, like a solo cello or panpipes.