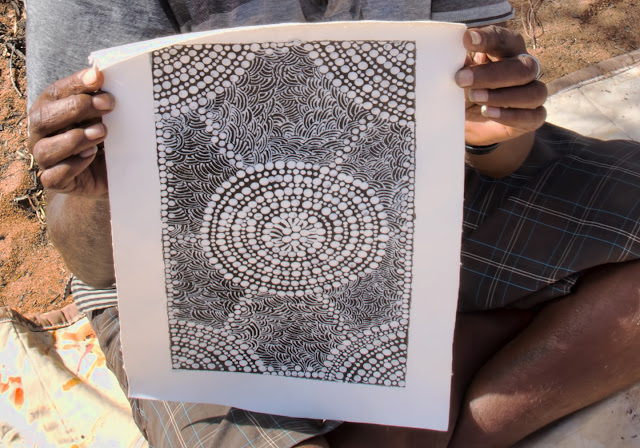 This painting, a classic aborigine rendering of the bush onion pattern, is being held by the artist, Marjorie Spencer. I cropped her out, because although she gave me permission to take her picture when I bought the painting, I doubt she would have liked it posted online.

Very few aborigines allowed us to take pictures; most said no when I asked and I always asked. Though I am quite comfortable sneaking pictures of people in most situations, this was such a taboo that I was never tempted to try to get around it. At a rest stop between Alice and Yulara, I was fiddling with my camera, trying to clean a stubborn spot off my lens and an old man across the yard thought I was pointing my camera at him to take a picture. Another man came over and ordered me to delete the pictures immediately, and I was glad to be able to show him that I hadn't taken any.

In an odd way, I feel as though the few pictures I was allowed to take are for me alone, and not for sharing. The history of the aborigines after the arrival of the European settlers is even uglier than most of those histories tend to be and it's still sad and unsettled. The aborigines had been in Australia for 60,000 years when the English arrived, and their ancient and alien culture had no commonality with Europe. They built no cities and amassed no wealth, but they managed to survive and even thrive in incredibly hostile conditions, using every plant and every animal that this harsh land gave them.

They don't thrive in modern Australia. Their culture is so tied to the land, each feature of the landscape its own song and story, that it doesn't lend itself to becoming part-time, a life where you can live in a city and work in an office and celebrate the old festivals when family gets together for the holidays.

I don't pretend to really understand these issues or to know what the answers could be. I do know that even in the few days that I was in the Outback, when sweat was pouring down my back and flies were crawling on my face and my knees hurt from too many rocky inclines, there was something so old and magical about the land around me that I felt an almost visceral connection to it. I can't imagine how I'd feel if it belonged to my people, if I knew the stories about each mountain, each waterhole, in a world that no longer respected such things and thought that I should live in a box and clean rooms in a tourist hotel and be grateful.