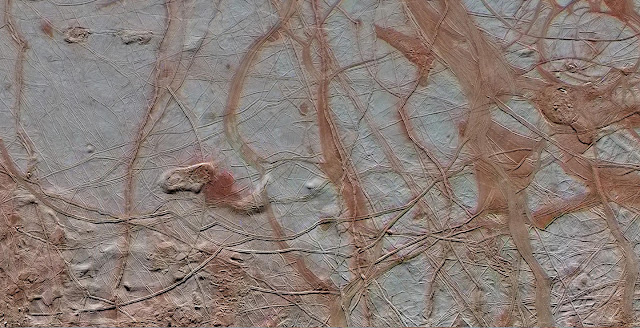 Any pattern you can imagine exists in so many places, in so many ways.

The red makes me think of blood vessels of course, but also rivers and highways and the lines on my skin. But this is Europa, one of Jupiter's moons, and these patterns are caused by ice breaking and reforming, possibly due to a liquid ocean beneath the icy surface. The rougher sections at the bottom of the picture are what astrogeologists call chaos terrain (I love that name) because of the jumbled way the various ridges and cracks and valleys intersect with one another.

On Europa, one of these sections is called the Conamara Chaos, because it (allegedly) resembles the landscape in Connemara, Ireland. I've never been to Connemara, but my mother grew up one county over and I'm fairly confident she would not notice a resemblance.