Is that a python in your pants, or are you just glad to see me? 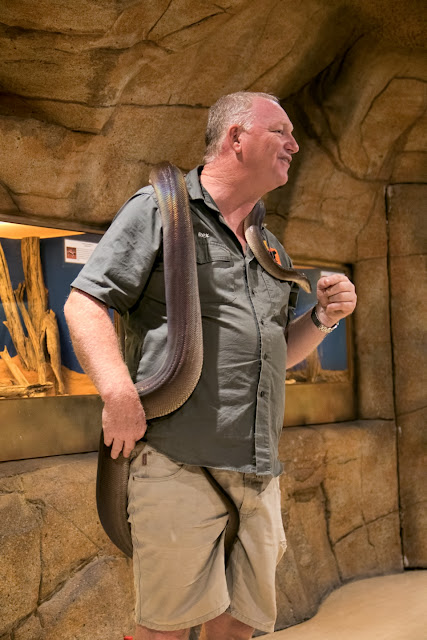 Here is the aforementioned Barry, olive python superstar, and the equally charming and far more loquacious Rex, our guide to the reptile center.

Rex told us a horrific story about a teenage girl in Alice who had been bitten by a brown snake while home alone the previous week. She was lucky for two reasons -- the snake didn't actually inject any venom in the bite, and  she stepped on the snake in her bare feet, so she knew she had been bitten. Because the poisonous snakes in Australia have such tiny fangs -- Rex passed around a box containing a fang from one snake; it was less than a quarter inch long and some snakes have fangs half that size -- it is quite possible to be bitten without noticing it, until it's too late to do anything about it. Fortunately that also means that just by wearing long pants and closed shoes you can avoid most snakebites, as they're not strong enough to penetrate clothes.

I don't think anyone in our group wore sandals the rest of the time we were in the Outback.
Posted by Kathleen at 3:06 PM